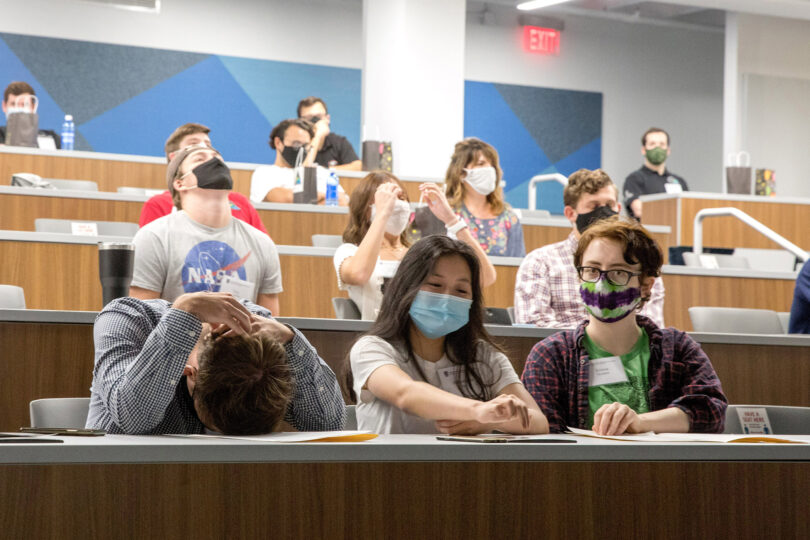 Small Satellite Lab students and other attendees at a launch party at Driftmier Engineering Center react after the mission was aborted shortly before takeoff Thursday night. (Photo by Dorothy Kozlowski/UGA)

Once deployed, it will provide valuable data on health of coastal ecosystems

Editor’s note: The launch was delayed less than three minutes before takeoff. The launch has been rescheduled for 9:16 p.m. Friday.

A student-led effort to get the University of Georgia’s first research satellite into space is ready for launch. After an aborted launch on Thursday, the small satellite SPOC, short for Spectral Ocean Color, is due for takeoff at 9:16 p.m. on Friday, Oct. 2.

The satellite will be on board an Antares rocket set to launch from the Wallops Flight Facility in Virginia. Once deployed, the small satellite will monitor the health of coastal ecosystems from space.

SPOC is poised to provide valuable data to researchers at UGA and beyond. It features an advanced optic system that can zoom in on coastal areas to detect chemical composition and physical characteristics on ocean and wetland surfaces—all of which fits into a spacecraft that’s about the size of a loaf of bread. 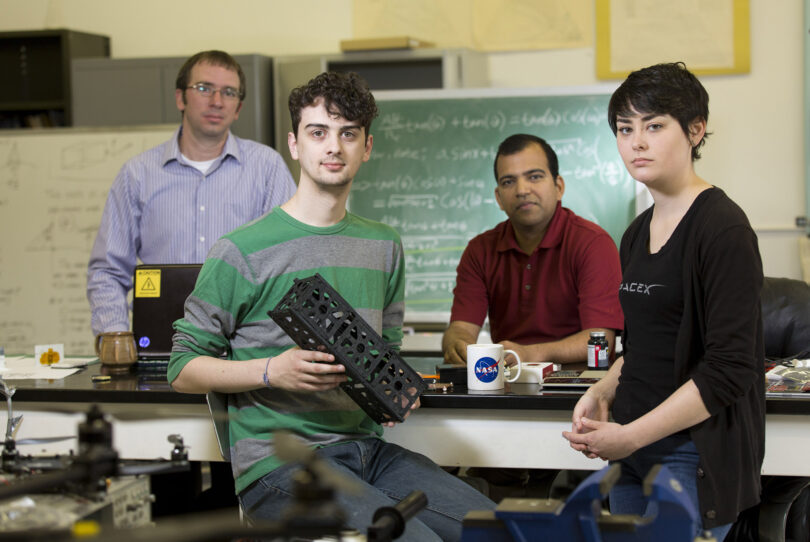 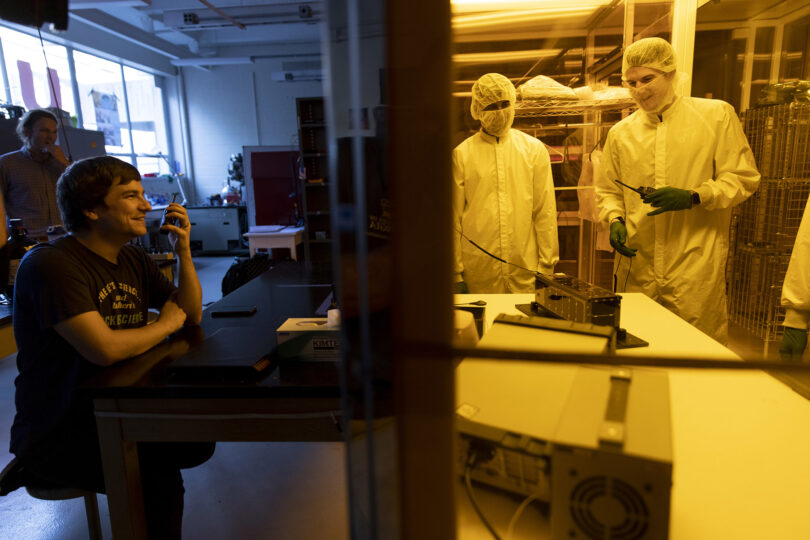 Hollis Neel, co-founder of the Small Satellite Research Lab, gives instructions over the radio to the crew inside the clean room at the lab in 2019. (Photo by Andrew Davis Tucker/UGA) 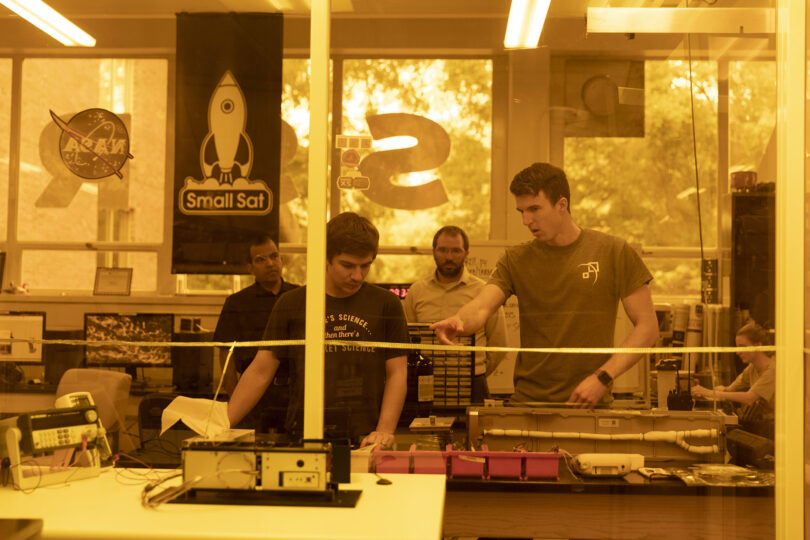 Hollis Neel, left, goes over the process to load the small satellite into a vibration testing rack with Tristan Prejean in 2019. (Photo by Andrew Davis Tucker/UGA) 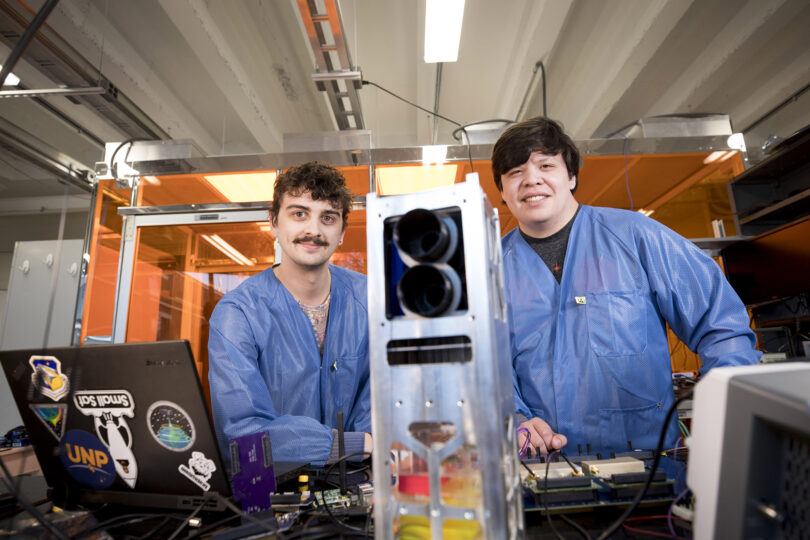 Lab-cofounders and former students Caleb Adams, left, and Graham Grable with a prototype satellite in March 2018. (Photo by Dorothy Kozlowski/UGA) 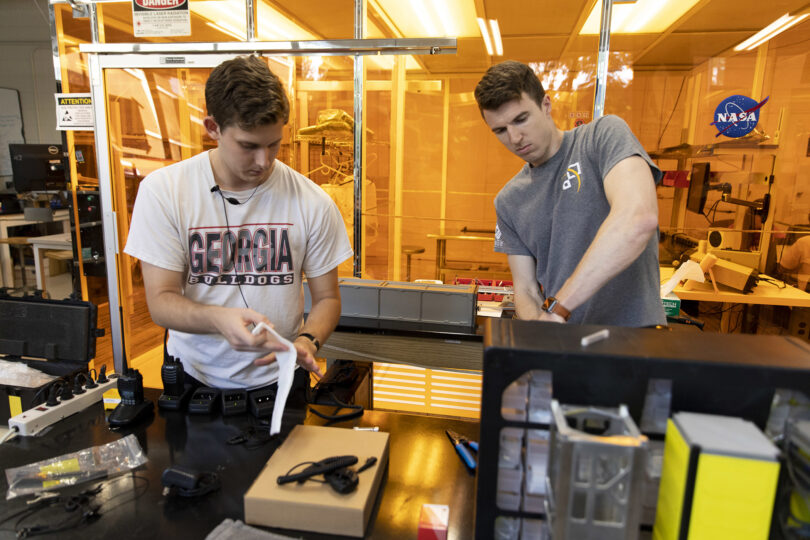 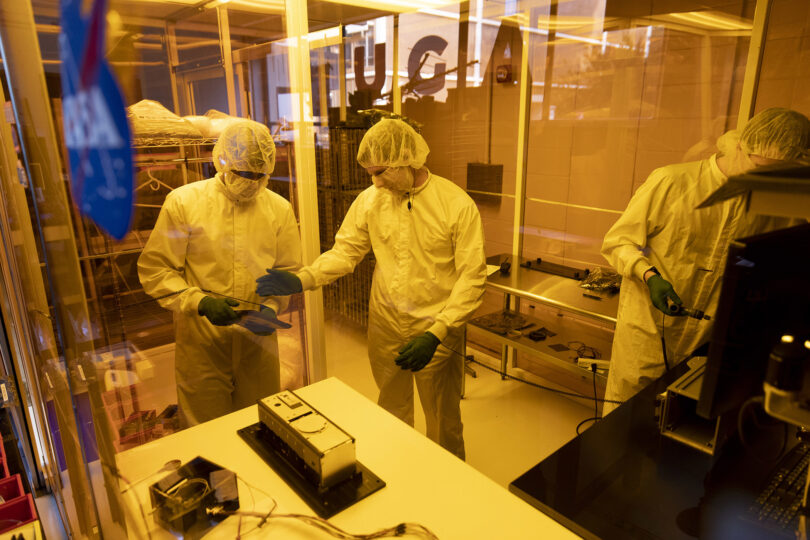 Undergraduates Nir Patel, left, and Jack McDaniels work on prepping the small satellite for placing it in a vibration testing rack with Tristan Prejean, a senior mission manager at Nanoracks, inside the clean room at the Small Satellite Research Lab in the Physics Building in 2019. (Photo by Andrew Davis Tucker/UGA)

The creation of the satellite and efforts to get it launched has depended on a close collaboration between eager students and faculty researchers, said Deepak Mishra, a UGA geography professor and director of UGA’s Small Satellite Research Lab.

“This project would be nowhere without students,” Mishra said. “Undergraduate students came with the skills, and faculty researchers gave them a scientific purpose.”

Getting off the ground

But it took years of hard work and overcoming a few setbacks—including the current global pandemic—to get to this point. It started in 2016 with a handful of students who dreamed of sending something—anything really—into space.

“I was looking for the most difficult thing I could find and throwing myself at it,” said Hollis Neel, a UGA graduate and one of the founders of UGA’s Small Satellite Research Lab. “That’s a theme you’ll find with a lot of us: We really enjoy a challenge.”

To turn challenge into reality, they needed funding and facilities. To get that, they teamed up with UGA researchers, who guided that dream into something practical. David Cotten, assistant research scientist and associate lab director, worked closely with a host of other UGA faculty advisors to devise research capabilities and solve the challenges faced during the satellite’s creation.

This is the goal that a bunch of us had, which was to send something into space. Just knowing that part of what I built and worked for is literally going off of this planet is extremely fun.” — Hollis Neel, a UGA graduate and one of the founders of UGA’s Small Satellite Research Lab

The team won a highly competitive research grant from NASA to secure a spot on a rocket and earn funding. Over the months and years, the lab has grown to include over a hundred students who get hands-on experience in fields ranging from physics and electronics to geography and engineering. Several students, such as Neel, have come into the program and then graduated, a few earned coveted NASA internships, and four have been hired by NASA’s Ames Research Center in Silicon Valley.

But before this launch, the team underwent a few setbacks and postponements. SPOC was supposed to launch in March, but a malfunction discovered weeks before takeoff spoiled that opportunity.

The pandemic further delayed that process. The lab itself, repurposed space in the Physics Building, is often teeming with dozens of students working closely together. It had to be shut down in the spring and summer. Now, only a handful can be in the lab at once. The rest of the team works virtually. And it has slowed the pace of work.

But finally, the commitment is paying off.

“This is the goal that a bunch of us had, which was to send something into space,” said Neel, who now works at Oak Ridge National Laboratory in Tennessee. “Just knowing that part of what I built and worked for is literally going off of this planet is extremely fun.”

SPOC will join about 8,000 pounds of research, crew supplies and hardware on the cargo spacecraft ready for launch Thursday.

A University of Georgia launch party, hosted by the UGA Alumni Association, the Franklin College of Art and Sciences, and the College of Engineering, begins Thursday at 7 p.m. The event will include briefings by UGA alumnus Roger Hunter, the program manager for NASA Small Spacecraft Technology, as well as students, faculty and administrators. NASA livestream coverage begins at 9 p.m. The launch is scheduled for 9:38 p.m.

Once successfully in space, SPOC will then travel aboard the cargo spacecraft to the International Space Station. After a few weeks, it will be deployed into orbit, and the satellite’s research capabilities in space will be put to the test.

“The most important date for our success will be sometime in November when the satellite is actually deployed, and the scientific mission begins,” said Mishra.

The lab hopes to have a second satellite MOCI, which stands for Multi-view Onboard Computational Imager, ready to launch in fall 2021. And a third satellite is in development with help from a local nonprofit, Let’s Go to Space.