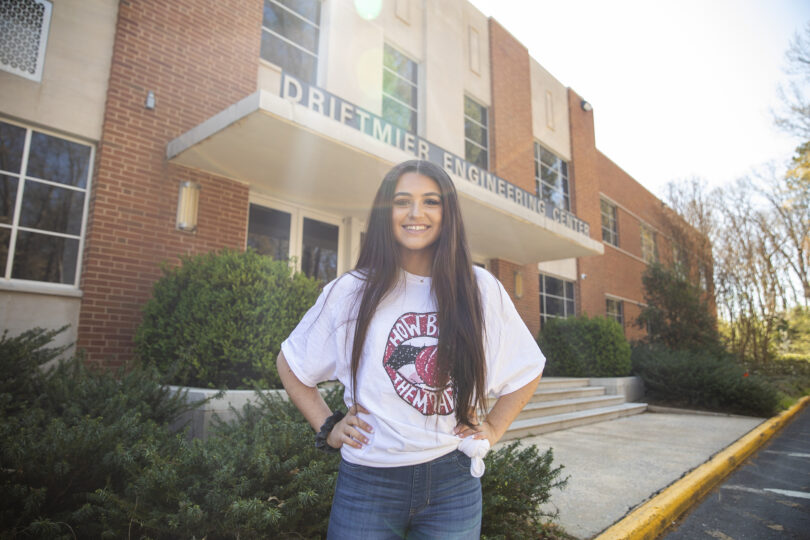 Ashley Galanti stands outside of the Driftmier Engineering Center. (Photo by Chamberlain Smith/UGA)

Ashley Galanti is developing a sensor to help people with epilepsy

It started in a high school physics class in Duluth, Georgia, when Ashley Galanti was given the assignment to create something to help people with diseases. Both her mother and brother have epilepsy, so she designed a wearable case holding a mouth guard used to protect people during seizures.

“It pushed the top jaw forward and opened the airway to prevent people from shattering their teeth, biting their tongue or suffocating during a seizure,” said Galanti. 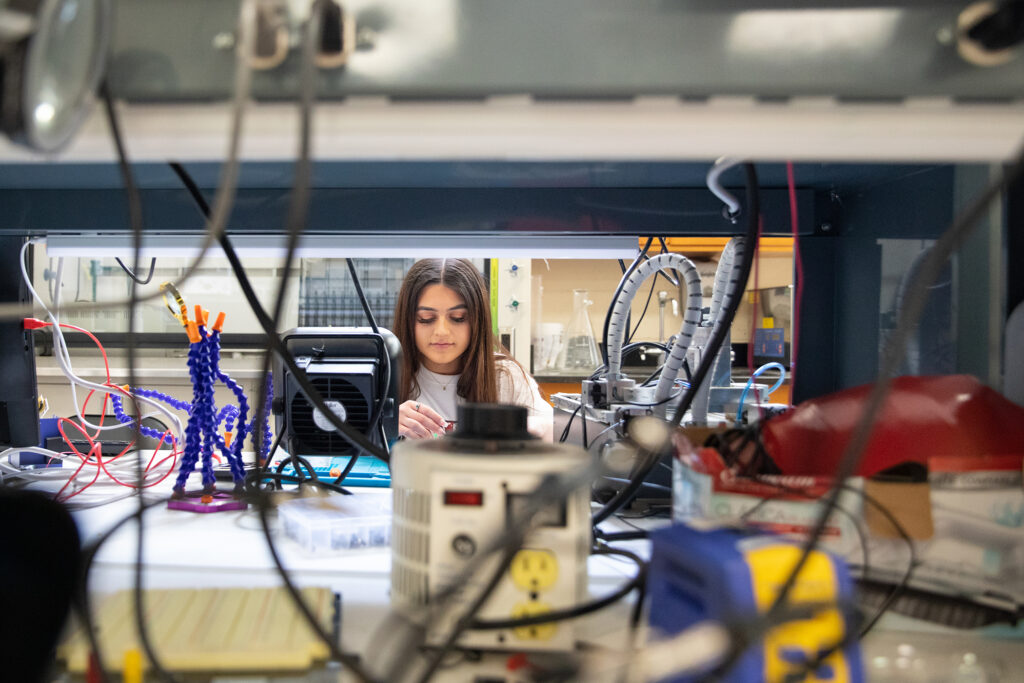 Ashley Galanti working in a lab in the Driftmier Engineering Center. (Photo by Chamberlain Smith/UGA)

She took the project to the Gwinnett Regional Science/Engineering Fair in 2017 and got third place. However, “People were like, well, you can’t really put the mouth guard in your mouth when you’re having a seizure already.”

And that could have been the end of it.

But Galanti is not the kind of person who gives up. If she doesn’t know something, she sets out to learn it. Her journey has taken her on unexpected paths, including delving into electrical engineering, adding an additional major to her journalism degree while at the University of Georgia, and obtaining an internship at a training facility for seizure alert dogs.

Galanti decided to find a way to detect seizures early so her idea could be put to use. “I got very lucky,” she said. “One of the only seizure alert dog places in the country was just an hour away.” She worked with the people at Canine Assistance to create a new device tailored to dogs. When the dogs sensed an oncoming seizure in their human companion, they could click a button on a device, alerting the human to insert the mouth guard.

It was a success. In 2018, she took it to the Gwinnett County Regional Science/Engineering Fair, then the Georgia State Science/Engineering Fair, where it won several awards, including the Georgia Engineering Foundation Award of Excellence for Impact on Better Living. But when she brought her idea to the University of Georgia, a developer thought there might not be enough seizure alert dogs to make testing the device feasible. Another dead end? Nope, Galanti decided, just more to learn.

This time, the problem was how to develop a sensor that could replicate a dog’s seizure-sensing abilities. “I came to UGA as a journalism major because I’ve always loved writing and talking to people. But I realized what I could do with the device I’d created if I had more engineering knowledge.” 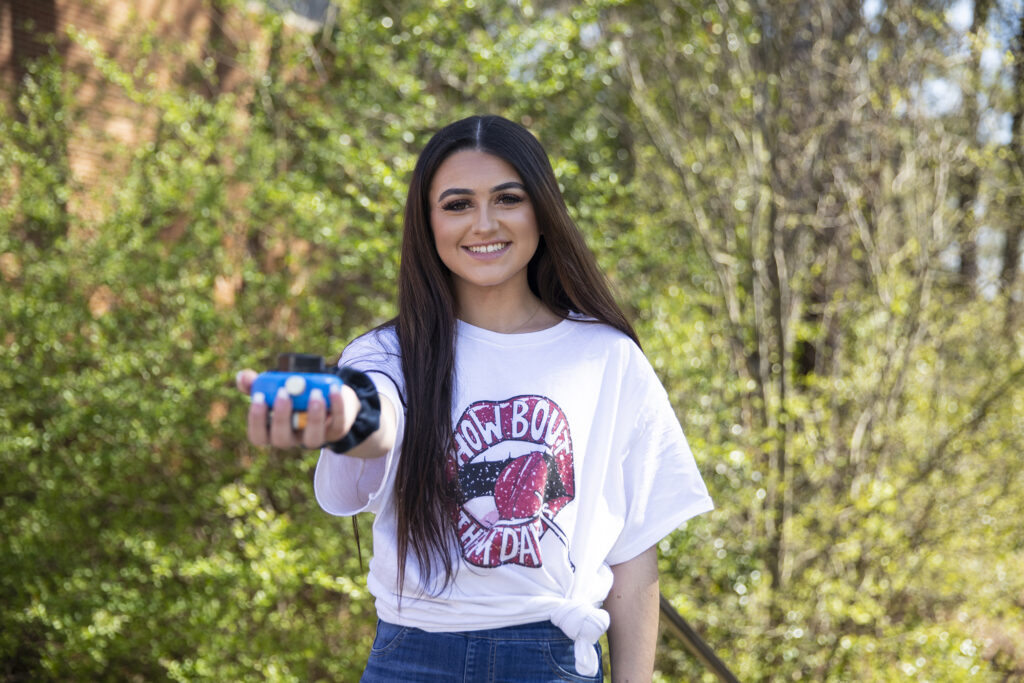 Ashley Galanti holds the original prototype for her medical device outside the Driftmier Engineering Center. (Photo by Chamberlain Smith/UGA)

At that point, she’d been pretty much self-taught. “It was all me going on Google to look at things like what a circuit is because I had no idea about anything.” She decided to tack on an electrical engineering major to learn what she’d need to know to continue work on her device.

She enrolled in a course at UGA’s Center for Undergraduate Research Opportunities, and has been collaborating with professors Mark Haidekker and Ramaraja Ramasamy to build the device. “We’re working towards the creation of the first-ever sensor that is able to use chemoreception,” she said. The idea is to detect the 11 volatile organic compounds that people release via skin, sweat and saliva before a seizure.

“I’m planning on it being an armband that you wear with a sensor placed at the armpit,” she said. “It’ll be really lightweight so that people who wear it won’t really notice it.”

The device will alert the wearer, but Galanti also wants to integrate it with Bluetooth to connect it with an app to alert family members and/or emergency services. “It would be really revolutionary in helping people who are unable to stop their seizures from occurring, especially when they’re doing something like driving, swimming or cooking.” 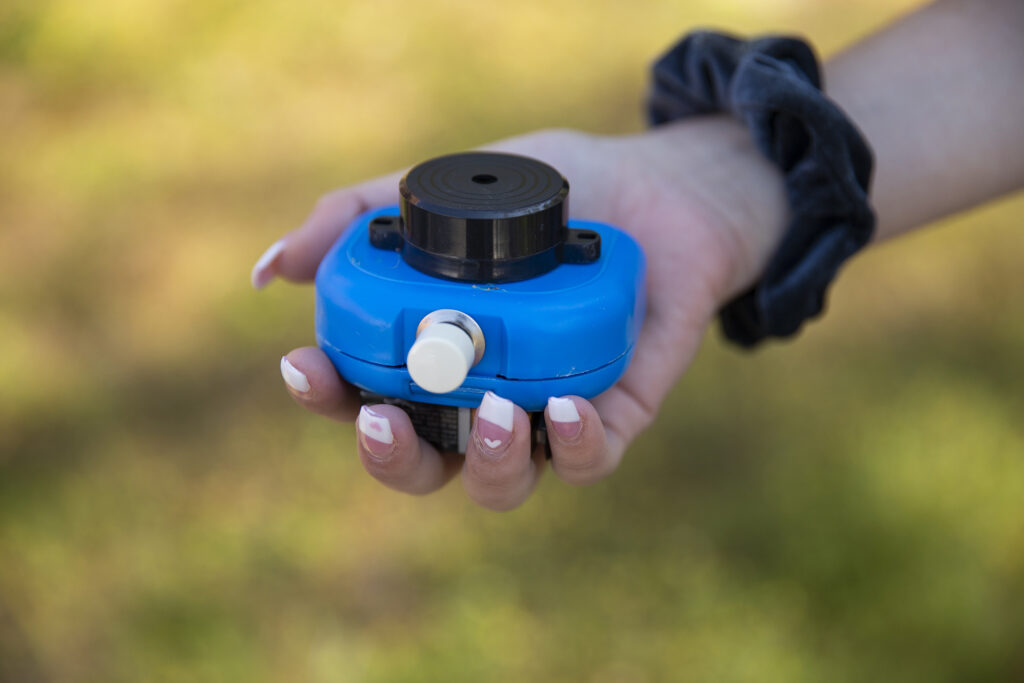 She’ll be in the CURO Assistantship program through the remainder of her undergraduate studies. “Then I will need to determine whether to continue the project to a Ph.D./master’s,” she said.  She’s also considering a stint as a solutions engineer post-graduation. “It’s the perfect mix of both of my majors. It’s someone who has the technical knowledge of an electrical engineer, and also enjoys talking to people and the world of marketing.”

What she’ll do next is not an obvious decision, because Galanti is just as passionate about her engineering as she is about her journalism co-major and her Spanish minor. “I like to say that my journalism helps me to identify problems, my engineering allows me to solve those problems and my Spanish allows me to do so across different cultures.”

Galanti is also interning at Caterpillar for her Capstone Senior Design Project, created a photojournalism documentary on addiction and was selected to cover the 2021 Paralympic Games in Tokyo, Japan, and the 2022 Winter Olympics in Beijing, China, through a program with the Grady College of Journalism and Mass Communication. (The latter wasn’t able to happen due to COVID.)

Downtime? It’s not really a thing for her. “Honestly? If you saw my calendar, I plan out every like 30 minutes to a T,” she laughed.

It’s a pretty safe bet that she will be all in with whatever it is she ends up doing. “I want to do something to help people in ways that have never been done before,” she said.