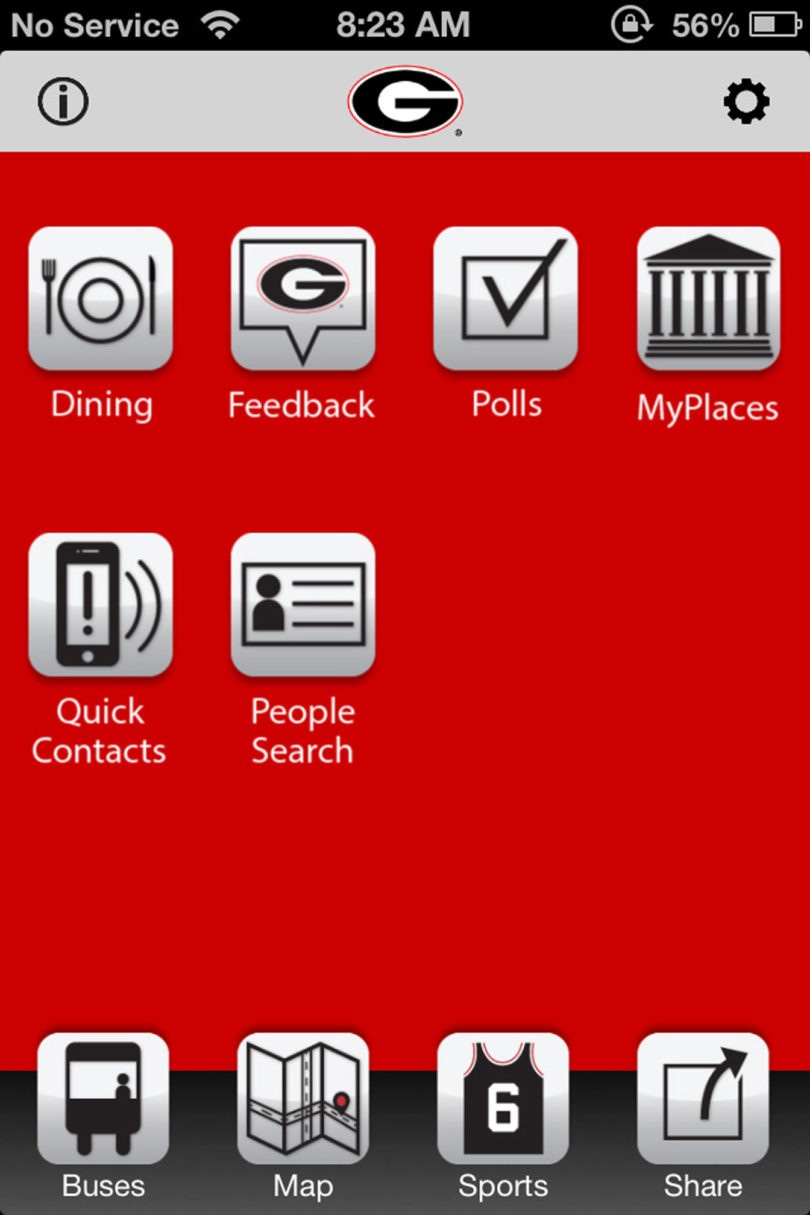 Athens, Ga. – The University of Georgia has launched a new central mobile app that lets users track campus buses, plan their meals at various dining halls and see the latest athletic scores, among other features.

The app is available in the Apple App Store by searching for University of Georgia, UGA and Bulldog. The app was planned and designed by the Student Government Association working with UGA Enterprise Information Technology Services. It is offered on the iPhone, iPad or iPod.

The app has a campus map and building search, a UGA people search, a UGA majors search, customizable calendars and locations and a quick contacts list with the ability to call Designated Dawgs, a free designated driving service.

One of the most anticipated functions of the UGA app is the campus bus tracker—a feature that allows users to pinpoint the next arrival time of buses by routes to their location, based on GPS technology. The app also shows the real-time capacity of dining halls and lets users see nutritional information for dining hall food choices.

“It can help you get through your day on campus by finding a bus or learning which dining halls are busy,” said Will Burgess, SGA president for 2012-2013. “Then, once you graduate, it can help you keep in touch with the university.”

About a year ago, a group of SGA students decided it was time to offer an app for the university that featured more functionality than the existing UGA admissions app. But, the students didn’t know who could provide the technical work on the app or how to pay for it. The students turned to the staff at EITS.

Burgess and his running mate, Marshall Mosher, also pledged to offer a UGA app as part of their campaign platform for SGA president and vice president a year ago. Once elected, they began moving forward with plans for a new app. SGA students met with EITS, which helped earmark Student Technology Fee funds for the project.

“They gave us full reign of content decisions on the app,” said Brittany Robertson, a senior graphic design student from St. Louis, Mo., who worked on the project. “They also gave me full reign of visual designs. And I had no idea that they were going to give students the freedom to make decisions on the app that the entire student body could download on their iPhones. I was just blown away with that kind of responsibility and trust. We don’t take it lightly. We really want to produce a product the we thought students would use, need and want.”

SGA members asked their fellow students what they wanted in an app. Those comments led to some of the features in the app and plans for future versions.

The first version of the UGA app lays the groundwork for more functionality later—such as the ability to check grades or register for classes.

Dave Crouch, director of the EITS Web and mobile technology group, said the student-driven app has been a unique opportunity for collaboration among multiple groups on campus.

“I’ve personally been really inspired to see everyone come together on this project,” he said. “Everyone has been contributing a lot and putting a lot of effort toward its completion and success. It’s been great to see this app come to UGA but also to see what we can do if we all work together.”

The UGA app is primarily a collaboration between SGA and EITS. Other campus partners include Auxiliary Services, the Athletic Association, the Office of Vice President for Instruction, the Office of the Vice President for Student Affairs, Public Affairs, Admissions Office, Registrar’s Office and Designated Dawgs. Among EITS staff, its web development team, identity management team, networking team and system engineers worked on the UGA app.