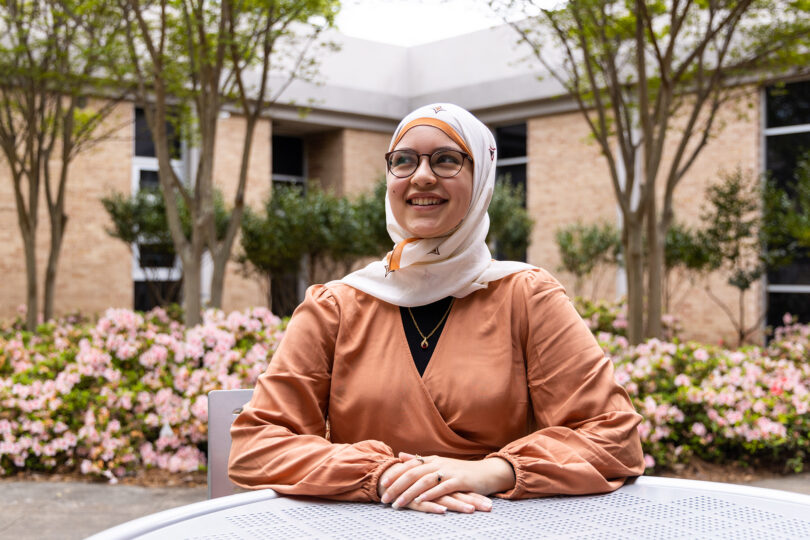 Mennah Abdelwahab sits in the Instructional Plaza outside the Grady College of Journalism and Mass Communication. (Photo by Chamberlain Smith/UGA)

Mennah Abdelwahab grew up in Bogart where she was one of the few Arab Americans in town. Her parents were raised in Egypt and her family is Muslim. She said that this, combined with growing up in a working-class family, gave her a unique perspective and made her want to help others and get involved in policy work, two things she has definitely accomplished during her time at the University of Georgia.

In fact, she and her twin sister just won an award celebrating their service to the community. Ayah and Mennah Abdelwahab were selected as UGA Presidential Award of Excellence recipients, which recognizes the top 1 percent of UGA undergraduates who excel not only in academics, but also in service to the community and leadership, both on and off campus. 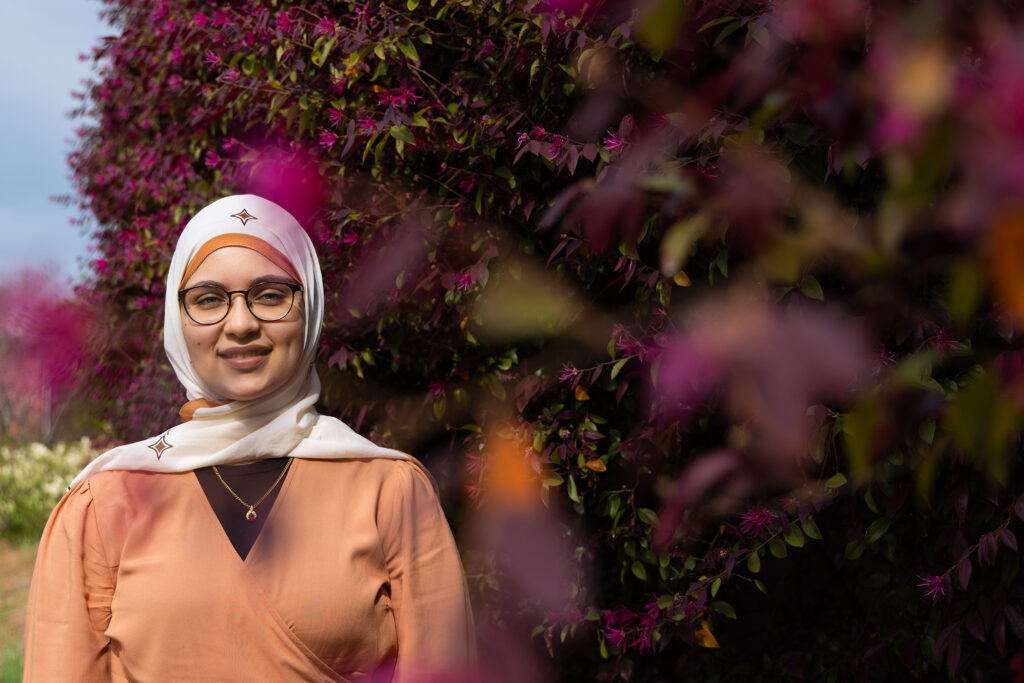 Mennah Abdelwahab outside the Grady College of Journalism and Mass Communication. (Photo by Chamberlain Smith/UGA)

Mennah said her UGA classes combined with her internships during college helped her find the necessary tools to do something about fixing some of the barriers she faced growing up. “I didn’t have the most elaborate understanding of how these issues are addressed or changed until I got to UGA,” she said. “My education and my internship experiences are helping me understand a lot of the more systemic issues. I started to realize that a lot of these things are policy issues.”

During her time at UGA, Mennah has taken every opportunity to learn and participate. She’s been co-director of the Student Government Association’s Diversity, Equity and Inclusion program, a Grady Ambassador, a Morehead Honors College teaching assistant and a CURO Honors Scholar. The graduating senior has two majors—journalism and international affairs—as well as two minors, Arabic and law, jurisprudence and the state.

“I came to the University as an international affairs major,” she said. “My goal was to help people, and I was trying to learn more about systemic issues in our society. I ended up adding a Journalism major to figure how to properly condense these issues in a way that is approachable and understandable to people, but also in terms of ‘This is why this policy is bad’ or ‘This is why we should pass this policy.’” 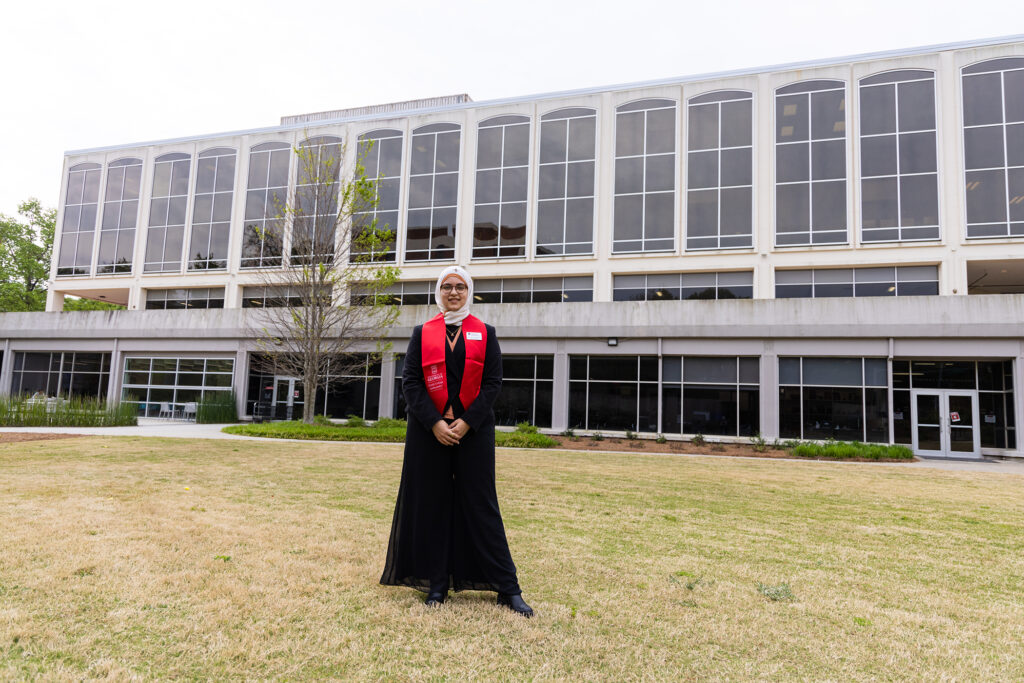 Mennah Abdelwahab in her graduation robe outside the Grady College of Journalism and Mass Communication. (Photo by Chamberlain Smith/UGA)

In her sophomore year, Abdelwahab started working for Georgia state Rep. Spencer Frye as a legislative fellow. In the fall, students conduct policy research on a topic of their choosing. In 2019, one of the things Abdelwahab researched was rural broadband access. “It wasn’t something that was really talked about then and it’s been cool to see something I did research on get more traction,” she said, noting the improvement in Georgia’s rural broadband access since the passage of the infrastructure bill.

In the spring semester, the fellows spend lots of time at the Capitol, hitching rides with Frye for the drive to Atlanta. “We’d arrive at his house at about 5:30 in the morning then go on our merry way,” she said. Often, they’d get back to Athens at 9 p.m. “They were long days but also really fun. We got the opportunity to go to committee meetings, watch sessions and read different legislation.” For the past two years, Abdelwahab has served as Frye’s public relations director.

If Abdelwahab ever needs to commiserate about what’s happening in her life, she can turn to her twin sister, Ayah, who has an especially expert perspective. Ayah Abdelwahab is also an international affairs major (although her second major is economics) and is the director of legislative research for Frye. The two share tips on their ongoing internships or just provide the comfort of someone who really does know exactly what the other is going through. “You never really feel alone, which is great,” she said. 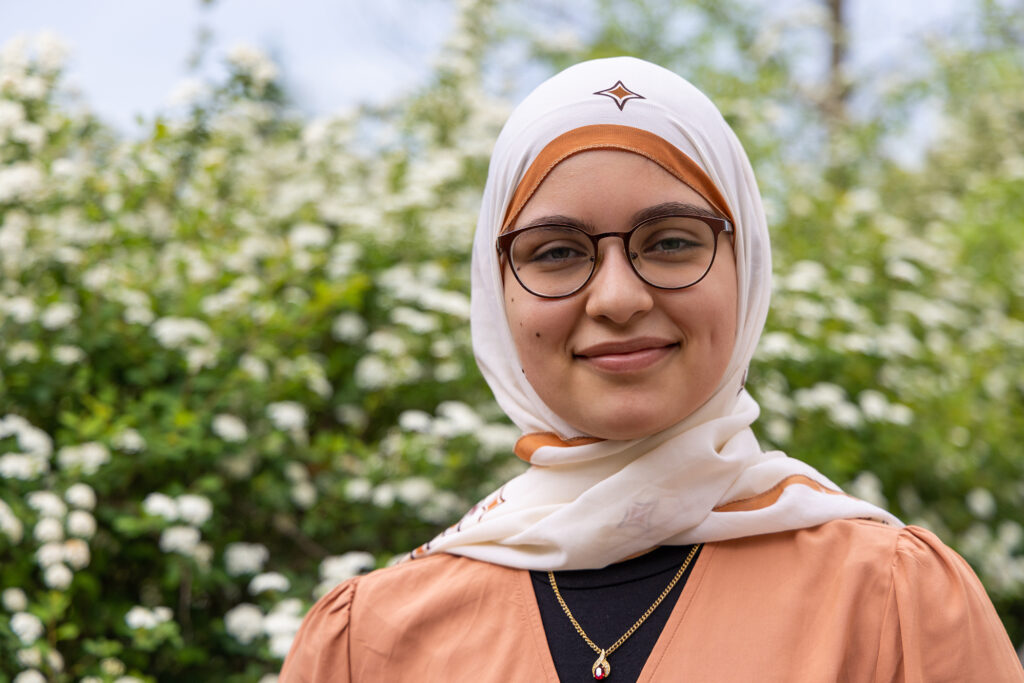 After graduation she will spend the summer in the Muslim Public Affairs Council’s Congressional Leadership Development Program. “I’ll be in training for a congressional office, and then after that, I’ll be looking to work in jobs that are in the policy research area,” she said. “My interests are very broad, which is a good thing, but it also makes looking for jobs kind of difficult because I am interested in so many different things.”

Her best advice for fellow go-getters?  “One of the things that college has shown me is that showing up and being engaged will benefit you so much in ways that you don’t even recognize,” she said. “I’m not under the impression that I’m the smartest or most accomplished person in the room, but I do try to make the most of being there and getting the opportunity to engage with the school and different people. Even when I’m a little exhausted—or very exhausted—I try to come back to this idea that if you are the person in the room who is engaged and trying and clearly shows that they care, it will reap so many benefits in the future.”

Abdelwahab said she encourages students to make sure they balance this desire to be as engaged as possible with their mental health needs. “I have been blessed to have the support of my friends, family, professors and UGA administrators and staff to make sure I feel as supported as possible. These individuals have been instrumental in my college career, and I encourage all students to find that supportive community by taking advantage of the variety of resources available on campus.”