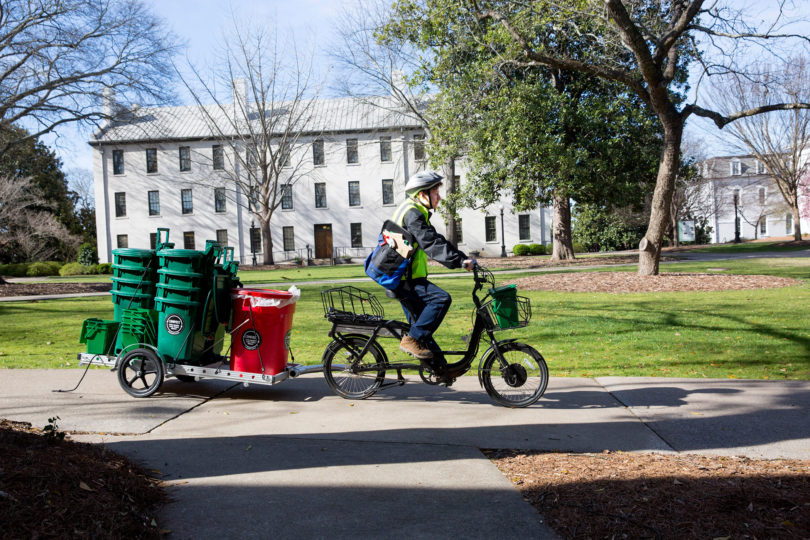 It’s an all-too-common sight: banana peels, coffee grounds and other organic waste going straight into the trash bin in offices across the UGA campus.

That doesn’t have to be the case, though. The Campus Composting project makes it easy to turn food scraps into fertilizer for campus plants, trees and flowerbeds.

“It’s pretty much taking waste that would usually go to a landfill, letting it decompose and turning it into compost for soil,” said Melissa Gurevitch, a senior environmental engineering major and intern with the UGA Office of Sustainability.

The program is part of Zero Waste UGA, an effort to send 65 percent less waste to the landfill in 2020 than the campus did in 2010, which is part of UGA’s Strategic Plan.

Through this and other sustainability programs, UGA diverts about 10,000 cubic yards of organic material from the landfill each year. Food scraps from the compost bins ultimately go to the Bioconversion Center on Whitehall Road to become compost. After about a year, facilities management can use the scrap mixture to enhance the soil on campus grounds.

About 30 buildings on campus participate in the departmental composting program, which usually collects between 200 and 300 pounds of food waste a week. In 2016, 6,000 pounds of compost were collected from departments across campus.

Green composting bins lined with compostable brown bags are set up in participating buildings’ break rooms near where people put their lunches and trash. An Office of Sustainability intern collects the bins once a week.

This spring, the composting program is also trying out a new bike program for pickup and delivery. Kevin Kirsche, UGA Sustainability’s director and a landscape architect, and Jason Perry, a sustainability specialist in the Office of Sustainability who manages the bike program, designed a wagon to carry the compost that is pulled behind an electric bike.

Produce such as apple cores and cucumber peels, grains like leftover bagels and coffee grounds are ideal for composting.

“Coffee grounds are fantastic because they are high in nitrogen content and biodegrade easier than other scraps,” said Tommy Lehner, a junior journalism major and sustainability intern who is currently collecting the bins. “And if you’ve ever held coffee grounds in your hands, they already feel like dirt and smell like coffee.”

In general, foods or items that are biodegradable, or can be broken down safely into raw materials and disappear into soil, are OK for the bins.

“We’re putting up signs above the bins that say what you can and can’t put in,” Lehner said.

Sandrika Walker, an administrative specialist in the Carl Vinson Institute of Government, said she likes that the compost helps UGArden, a student-run organic farm that shares produce with families in need in the Athens community. Her office has been composting for two years, donating old bread, egg shells, coffee grounds, collard green stems, fruit and much more.

She often brings food scraps from home, and she and her co-workers compete to see who can collect the most. Her office won the first departmental competition last year and received a custom tin of Jittery Joe’s coffee called “Green Beans.”

“If anyone wants to compost or send their food scraps to us, we’ll happily take them,” Lehner said. “If we can create solutions that are easy and that everyone can do, then we’re moving forward.”

To request a bin for your office or building, contact the Office of Sustainability at compost@uga.edu.