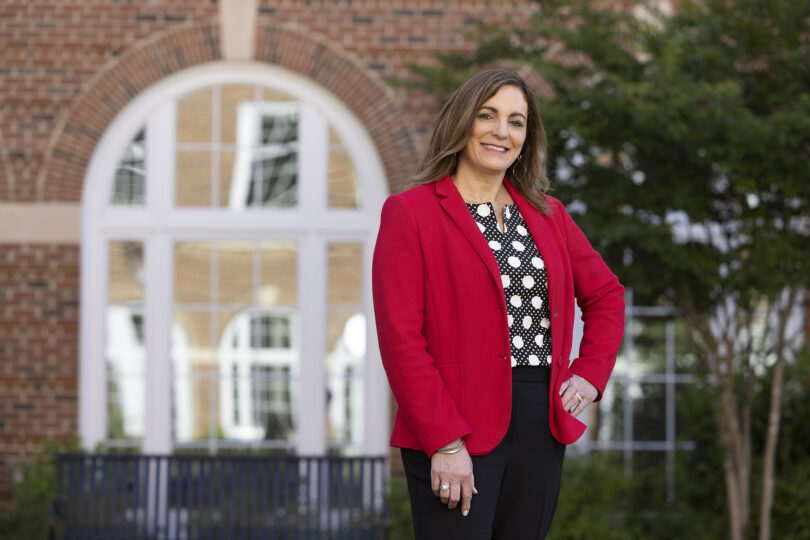 Sharen Phinney is the director of undergraduate student services at the Terry College of Business. (Photo by Peter Frey/UGA)

Sharen Phinney is a motivator, mentor and nurturer at Terry College

Sharen Phinney has been connecting with students since she attended UGA herself and served as a speaker at orientation about how to get involved on campus.

Now, as director of undergraduate student services at the Terry College of Business, she’s not just a connector. She’s also a motivator. She’s a mentor. And she’s a nurturer.

“Nothing brings me more pleasure or makes me smile more than to see our students succeed,” she said.

But Phinney’s most important role is that of connector. She and her team bring together students with alumni and employers and help them foster those relationships through activities like Employer of the Day. She also gets them prepared for what comes next so that “they can confidently go out into the workforce” with professional development programming that includes even the youngest students.

“My job really is to listen and ask those guiding questions,” she said. “The most rewarding part is at the end when they say, ‘Oh, thank you so much for helping me figure this out.’”

After Phinney graduated from UGA with a Bachelor of Fine Arts in interior design, she worked in Atlanta until she married her husband, a U.S. Air Force F-16 pilot. They lived abroad for a total of 11 years, most recently in support of his position in NATO leadership where their children attended an international school. Phinney said that immersive experience helped them all become better global citizens because they learned so much about different cultures.

Her husband’s final assignment was in Montgomery, Alabama, and that’s where Phinney got involved in higher education. She took a position at Auburn University at Montgomery as the international student engagement coordinator, which she said was “a very good fit” because she could relate to her students through her experiences abroad.

In 2015, her husband retired from the military, and they moved back to Georgia. Phinney took a position in UGA’s College of Family and Consumer Sciences as a student leadership and experiential learning specialist. After that, she took a different position as assistant director of corporate relations at Terry College before moving to her current role.

That role has many sides, Phinney said. Her team is heavily involved with student engagement, working with Terry’s more than 30 student organizations. They also support professional development by promoting alumni networking and offering opportunities like Terry Women’s Initiative, Sea Island Scholars and programming for intended business students, those who are initially admitted to Terry College as Intended business majors and typically apply to their specific field of study during the second semester of their sophomore year. There is also a corporate engagement side, where her team recruits for internships and full-time positions for upcoming graduates and handles TerryConnect, the college’s networking and event platform.

“That’s the most special thing—knowing that they can go out confidently and enter the workforce, feeling prepared,” she said.

“Our team is constantly on the run,” she said. “We’re still moving at a very quick pace.”

Phinney’s goal is to expand Terry’s intended business programming to better engage first-year students. Her team is working with the Exploratory Center on new ideas as students return to on-campus classes and activities this fall. They are also working with Terry’s diversity officer and Terry’s student ambassadors to recruit at area high schools. Additionally, they are focusing on wellness programming by promoting resources and offering opportunities to foster physical and mental health.

Outside of work, Phinney enjoys traveling to places on her bucket list and hiking in national parks. She also spends time at the family farm. Gordon Phinney Farms, a Centennial Family Farm located in Wilcox County, is a mid-sized multi-generational enterprise and certified tree farm for wood, water, recreation and wildlife management.

Phinney is always looking to the future, whether that is her next trip or the next program for her students.

“We are constantly striving to meet the needs of our students by providing tools to sharpen their Terry edge and by offering connections to obtain meaningful internships or full-time employment.”