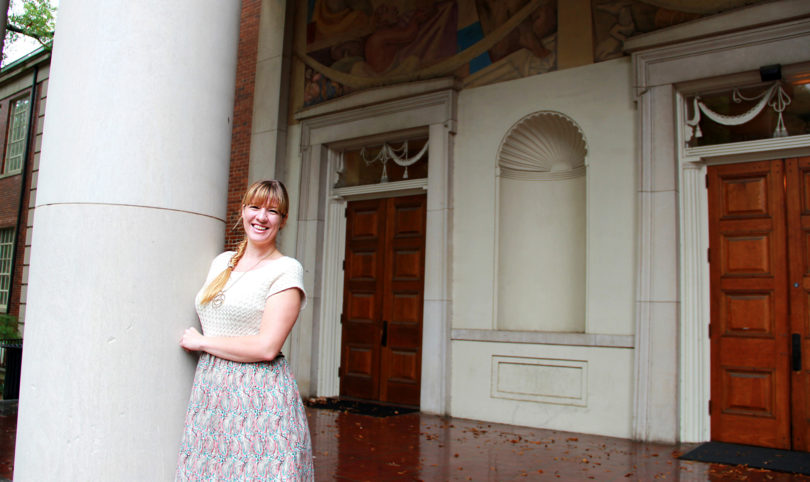 Athens, Ga. – Students will be in the spotlight once again during the third annual Spotlight on the Arts festival Nov. 6-14 at the University of Georgia.

In addition to the more than 60 events sponsored by the UGA Arts Council during the 2014 festival, nearly two dozen Student Spotlight events have been organized and produced by students, including DJs in Snelling Dining Hall, a flash mob, an Alfred Hitchcock film festival, a comedy show and several dramatic productions and musical performances.

In an inaugural event called “4 minutes, 33 seconds: Spotlight on Scholarship,” graduate students in the arts will have a chance to share their research with the community. Inspired by John Cage’s 1952 composition 4’33”-which challenged audiences to reconsider the function of art and the borders between traditional art disciplines and between artistic practice and philosophy-students will have 4 minutes, 33 seconds to explain their research. Two prizes of $433 will be awarded during the competition, scheduled for Nov. 10 at 5 p.m. in the Chapel.

Students in the Music Business Program from the Terry College of Business are involved in the production and promotion of the Spotlight • Slingshot Concert on College Square. The Nov. 8 concert features an orchestrated performance of Memphis band Big Star’s “Third” album, with an all-star lineup featuring original Big Star drummer Jody Stephens, Mike Mills of R.E.M., Chris Stamey of the dB’s, Mitch Easter of Let’s Active, Pat Sansone of Wilco and Ken Stringfellow and Jon Auer, both of Big Star and The Posies, along with student musicians.

“There is a lot of talent and a rich culture of the arts here at UGA. It’s great to be able to showcase that,” said Katie Gregg, a graduate student pursuing a Master of Fine Arts degree in dramatic media in the Franklin College of Arts and Sciences, who has organized the Student Spotlight schedule.

Even as a student in the department of theatre and film studies, Gregg said she was surprised to discover the wealth and breadth of student organizations focused on the arts, and she is excited to reveal their talent to the student body this November.

“I had no idea how many student-run organizations based around the arts there are,” she said. “There are a lot of people willing to perform and there is not always a diverse audience for that. Having those performances be a part of the festival will allow the performers to reach an audience they may never have had, and, vice versa, students who would not usually come to a show would get to experience that.”

While Student Spotlight events will be held throughout the nine-day festival, many of the performances will be staged during a “main event” at the Tate Center Plaza on Nov. 13. That day, students can take a break between classes to watch improv skits, watch actors perform scenes and listen to a singer-songwriter perform original compositions. Students also have a chance to take the conductor’s baton for the Hodgson Wind Ensemble.

The complete Student Spotlight schedule is below.

Spotlight • Slingshot Concert on College Square
4-9 p.m., College Square, downtown Athens
The Jane and Harry Willson Center for Humanities and Arts and the Terry College of Business Music Business Program present an installment of the Slingshot festival of music, electronic art and technology. The free public concert will feature five local and national acts, many including UGA graduates and attendees.

Monday Nov. 10
Experience UGA 10th-Grade Field Trip
10 a.m. to 1:30 p.m., Stegeman Coliseum
As part of the Experience UGA 10th-grade field trip, students in Emily Sahakian’s Community-Based Theatre class will introduce 10th-grade students to theatre for social change. In line with the Georgia Performance Standards for World History, 10th-grade students will learn about the Theatre of the Oppressed improvisational and expressive techniques developed by the great Brazilian theatre artist and cultural activist Augusto Boal (1931-2009). Boal’s grassroots theatre has been used across the 20th century to mobilize people and foster social consciousness in Latin America, Europe and the U.S. Reflecting on their own choices and experiences and the power dynamics of our local context, the students will use these techniques during a 45-minute workshop to cultivate community and rehearse for positive social change.

4 minutes, 33 seconds: Spotlight on Scholarship Competition
5 p.m., UGA Chapel
The event, which will award two prizes of $433 each, will showcase the scholarship and research in the arts conducted by graduate students at UGA. Graduate students have 4 minutes and 33 seconds to describe their research and can use up to 33 visual aid slides to help explain the topic.

Athens Playwrights’ Workshop Short Play Readings
7 p.m., Room 201, Fine Arts Building
Athens Playwrights’ Workshop will present 10-minute play readings for the festival. The group meets twice a month in Room 201 of the Fine Arts Building and is based on the writer-centered model in which playwrights bring in a section of a current project, which is then read and discussed with other members. For more information, contact John Bray at JohnPatrickBray@yahoo.com.

Preferred Parking Comedy Tour
7 p.m., Tate Theatre
Comedians Drew Lynch, who stutters after a softball accident paralyzed one of his vocal cords, and Samuel J. Comroe, who has had Tourette syndrome his entire life, showcase the inspiration and hilarity in their lifelong struggle. The comedians aim to inspire and motivate audiences to think twice before complaining about their own struggles. Admission is $5, free for students with valid UGACards.

Tuesday, Nov. 11
Experience UGA 10th-Grade Field Trip
10 a.m.-1:30 p.m. Stegeman Coliseum
Students in a UGA community-based theatre class will introduce 10th-grade students to theatre for social change. The students will then use these techniques together during a 45-minute workshop to cultivate community and rehearse for positive social change.

Collegetown Gospel Choir
7-8 p.m., Location TBA
The choir serves as an opportunity for individuals to utilize their musical gifts and talents while engaging in fellowship and communal worship.

“The Muslims Are Coming!”
7 p.m., Tate Theatre
This film follows the travels of a group of Muslim American comedians as they visit big cities and small towns to combat what they call “Islamophobia.” The comedians perform standup at each tour stop and create ridiculous interventions in unsuspecting town squares. Throughout the film, comedians like Jon Stewart, David Cross, Janeane Garofalo, Colin Quinn, Lewis Black, Aasif Mandvi and broadcast heavyweights like Rachel Maddow, Russell Simmons and Soledad O’Brien comment on the power of comedy and the political scope of bigotry. Admission is $5, free for students with valid UGACards.

“Conduct Us”
12-1 p.m.
Attendees have the opportunity to conduct the acclaimed Hodgson Wind Ensemble.

Kimberly Simpson
1:30-2:30 p.m.
The singer-songwriter will perform a set of original compositions.

Improv Athens
2:30-3:30 p.m.
Improv Athens is an improvisational comedy group based out of UGA that holds shows, open rehearsals, competes and is nationally ranked. The group will be performing an hour of improv, ranging from short-form “Whose-Line-Is-It-Anyway”-type games, along with some more lengthy long-form improv comedy scenes.

Black Theatrical Ensemble
3:30-4 p.m.
The student group will give a performance.

Next Act
4 p.m.
The student group will give a performance

Friday, Nov. 14
Saxophone Studio Flash Mob
1:25-2:15 p.m., East Campus, Ramsey Student Center for Physical Activities, Georgia Museum of Art
There will be live music in unexpected places and performers emerging from behind walls and staircases. For more information on the UGA Saxophone Studio from the Hodgson School of Music, contact professor Connie Frigo at conniefrigo@gmail.com.

About Spotlight on the Arts
Presented by the UGA Arts Council, the third annual Spotlight on the Arts features more than 60 events in the visual, literary and performing arts. The nine-day festival, scheduled for Nov. 6-14, includes museum tours, discussions with writers and concerts, including a free outdoor concert on College Square. For the complete schedule, see www.arts.uga.edu, and follow the Arts at UGA on Facebook or Twitter.