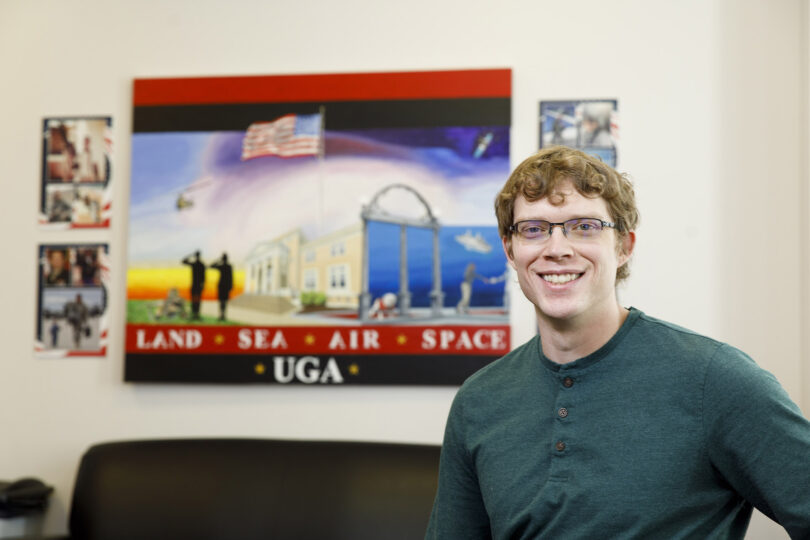 Eric Martin poses with the painting he did for the Student Veterans Resource Center. Measuring 5 feet wide by 4 feet tall, the painting took Martin a year to finish. The artwork speaks to the student veteran experience, from service to matriculation to commencement—past, present and future. (Photo by Andrew Davis Tucker/UGA)

For student veteran Eric Martin, art is therapy. Art is a release. And art is a distraction.

For nearly a year, Martin worked on the painting. He sketched and designed and painted it one panel at a time. The painting is his largest work ever and became a lesson in patience and the creative process. “To see it come together in such a cohesive manner when it was finished was really rewarding,” he said.

Like any labor, the process was not without hurdles. He had to be reminded to keep going forward. When he thought everything was going wrong with the painting, his wife would remind him, “This is part of the process. Keep moving and creating and you’re going to be satisfied.” 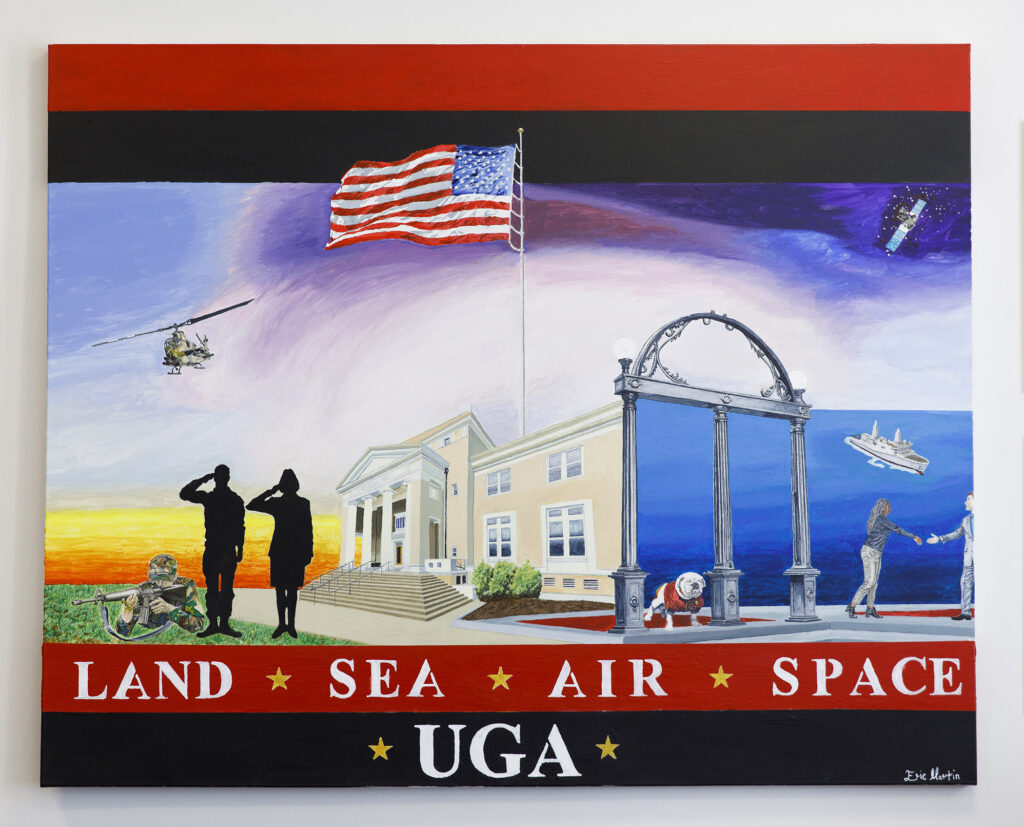 Art has always played a part in Martin’s life.

“I’ve always used art to express how I was feeling,” he said. “From the time I was a kid and could pick up a pencil, drawing was my escape. I used it not only to escape the people around me, the things going on around me, but also as a way to define myself from those around me.”

Martin would copy ideal works of art, Marvel comics—anything he found visually interesting. When he joined the military, art was his way of coping with the tedium of the military and his daily tasks.

“Any time I had downtime, I would use whatever pen I had around me. Usually, I would use ballpoint pens. The finer the point, the more detail I could get. I would see how intricate I could make the design. I would fill a small sheet of paper with an insane amount of intricacies,” he said. “It was how I would escape in order to find myself.”

Martin, who enlisted in response to the 9/11 attacks, was on active duty in the Army for almost six years and went on a 15-month tour of Iraq. He served as a mortarman in the infantry, operating with 81mm and 121mm mortars, with the large bombs regularly exploding near his head.

“There are a lot of people who don’t experience what I experience. They come out of the military, and they’re just fine,” he said.

Martin was knocked unconscious in a vehicle rollover. “The vehicle caught fire while we were inside. We lost a soldier,” he said. At least two improvised explosive devices went off next to his vehicle. Once, he walked a route clearance in the middle of a field—and walked right over a tripwire. The wire was set up to trigger an ice cream truck full of missiles. But the wire was faulty.

“The threat of death was so close,” he said. “Just going outside the wire every day and having pop shots hit right next to you, to know exactly what it sounds like to have a bullet coming straight for you, it’s a very distinct sound.”

After military retirement, Martin, who grew up in Conyers, knew he wanted to go to art school on the GI Bill. UGA had the most expansive art program he could find.

But he couldn’t just apply to UGA with his portfolio. Because he dropped out of high school in 10th grade and got a G.E.D., he had to take 30 hours of classes at Athens Technical College before he could transfer to UGA. And that’s what he did. In 2015, he moved from New Hampshire to Georgia with his family. 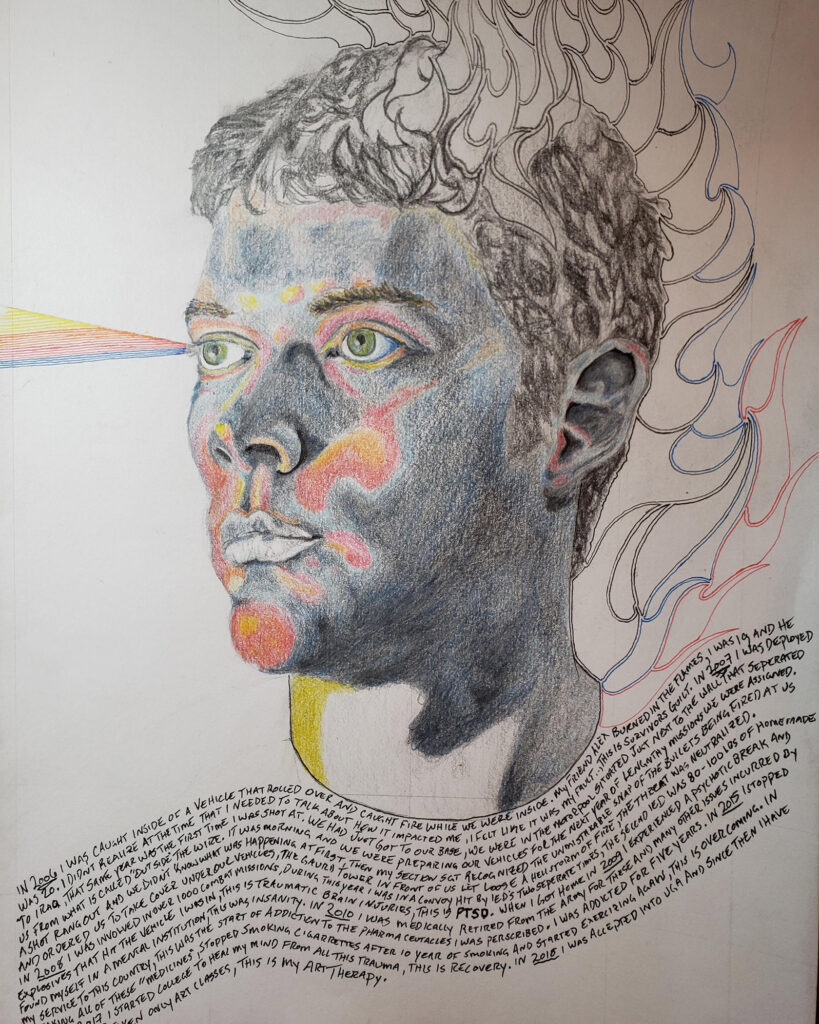 “Combat Veteran,” a self portrait by Eric Martin.

“This whole journey of college to me is art therapy,” he said. “I intend to apply it to helping other people.”

His dream is twofold: to fulfill commissions and create artwork for others. He also wants to use art to help other veterans. His goal is to teach art therapy to local veterans’ groups.

Painting and sketching can be a distraction—something for the mind to focus on rather than pain or stress. For Martin, art helps him informally manage PTSD and chronic pain without drugs. Therapy, strong family support and support from Veterans Affairs and UGA also help him cope.

“Creating artwork and being immersed in that takes me out of the pain. It does give some bit of reprieve,” he said.

It’s also a way for him to process his experiences—to put on paper what he’s been through, and not just in his brain and his dreams.

For now, he’s teaching his children, ages 5, 7 and 9, to draw and sketch. “They love when I come home and I show them what I painted. They’re blown away that I can do this,” he said.

With all he’s been through, Martin tries to practice gratitude. “To wake up and be grateful to be alive is a daily experience that’s motivating,” he said.

“It’s a dream come true,” he said of being alive, going to art school, having a life with his wife and three children. “To wake up and to be here, where there’s silence, there’s calm. Even when there’s the chaos of my kids yelling and screaming and running around, I am grateful for it.”

Read more about “We Came by Land, Sea, Air and Space.”