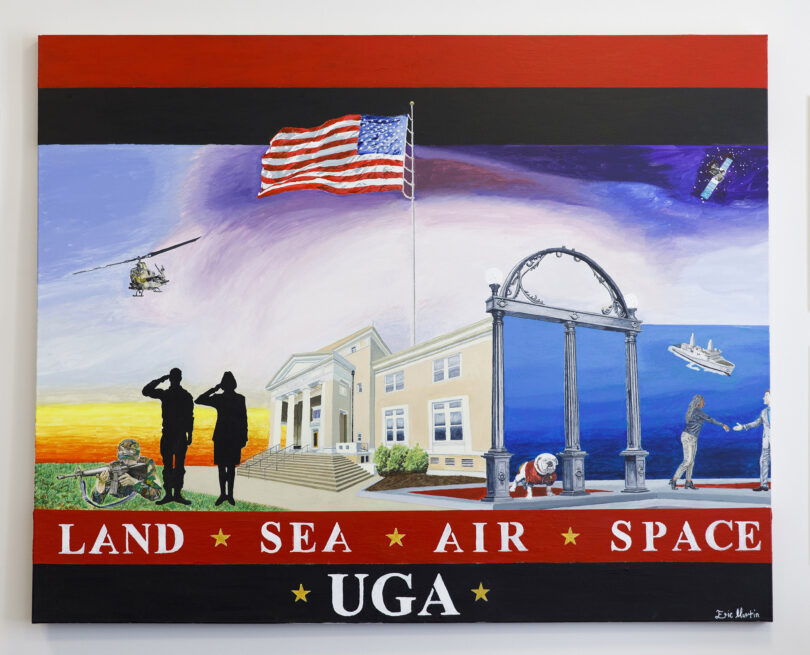 Painted by Iraq veteran, the artwork represents the past, present and future of student veterans

This summer, an oil painting titled “We Came by Land, Sea, Air and Space” was completed for the University of Georgia Fiserv Student Veterans Lounge.

Painted by student veteran and art major Eric Martin, the artwork speaks to the student veteran experience, from service to matriculation to commencement—past, present and future.

Measuring 5 feet wide by 4 feet tall, it took Martin a year to finish. It also represents all the branches of the military.

The first panel he worked on the land panel, which features a prone soldier shooting. It speaks to a soldier’s past.

The goal is to bring attention to a soldier’s unique past. “During that time, a lot of people might not have the experience of losing fellow soldiers, but I did. And I wanted to pay homage to those who can’t be here with us. Those are the silhouetted soldiers,” Martin said. 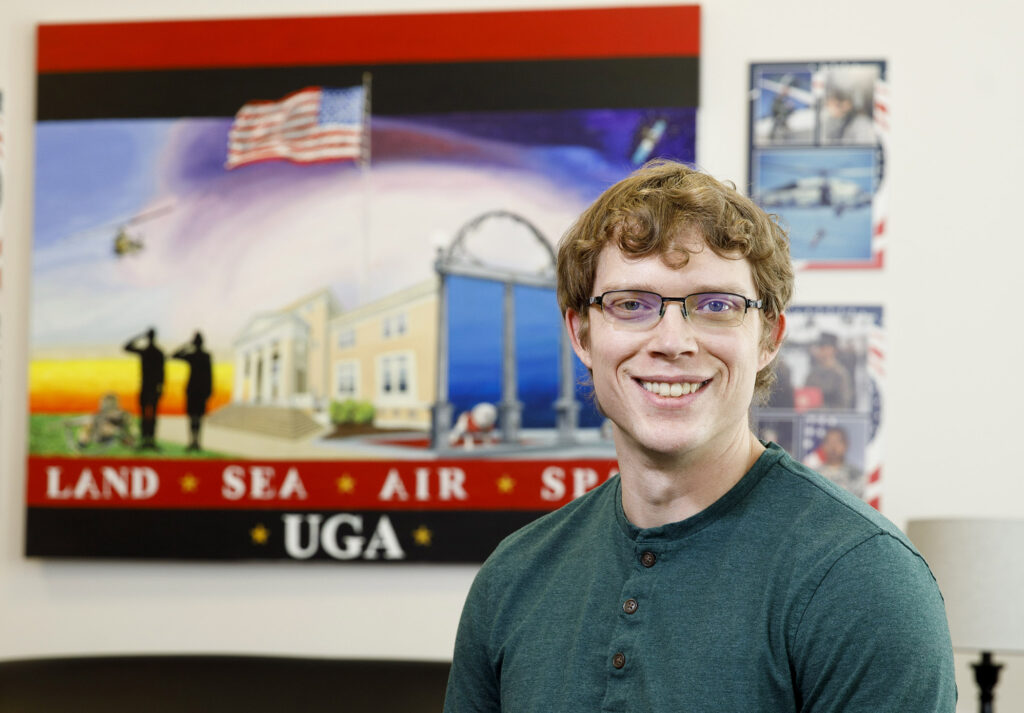 Eric Martin, an art major from Jefferson, poses with his painting, “We Came by Land, Sea, Air and Space.” He tried to illustrate a story “that would represent a veteran’s past, present and future as they’re traveling through this journey of college.” (Photo by Andrew Davis Tucker/UGA)

The present is going to school, which is symbolized by Memorial Hall. The hall was built to honor the 47 UGA graduates who died in World War I. An inscription within the building reads, “In loyal love we set apart this house, a memorial to those lovers of peace who took arms, left home and dear ones and gave life that all men might be free.”

A large American flag flies over the building in the painting.

To show the future for veterans, the painting focuses on the next steps after college. “What we’re all aiming for is to graduate,” Martin said. “To get through college and move forward to a professional career—that’s represented by the handshake.”

The point was to encompass all of the branches of the military. Originally the painting was envisioned as “By Land, By Sea and By Air” to represent the Army, Marines, Navy and Air Force. However, in December 2019, U.S. Space Force was created.

The satellite represents the new branch. The helicopter depicts the “By Air” part of the military’s mission, specifically the Air Force. The USS New York represents the Navy, but also represents the 9/11 attacks as the ship was built with steel from the remains of the World Trade Center towers.

Sept. 11 hold a lot of significance to the military. “A lot of us joined because of it—to combat this unprovoked terrorism in our country,” said Martin. “It was a major event in our history,” and the ship is his nod to that history.

“I hope the artwork shows the importance of remembering those we have lost, the honor of service to our country, and the student veterans’ perseverance and dedication to self-improvement through higher education.”—Eric Martin

How it came to be

The painting was a collaboration between Martin; Ted Barco, director of the Student Veterans Resource Center who served in the Air Force; and Richard Warner, a longtime SVRC donor and Vietnam veteran. The three brainstormed ideas for the painting and Barco and Warner reviewed its progress.

“I added what I thought would look good visually and what would flow and tell the story that would represent a veteran’s past, present and future as they’re traveling through this journey of college,” Martin said.

His favorite parts of the painting are the flag and the bulldog under the Arch. He enjoyed painting Uga, who “came out more realistic than I was expecting.”

He wanted to include the live bulldog mascot, because Uga is the symbol of the university. Martin also has an affinity for dogs, which play a large role in the military. Martin served in the 27th infantry, the Wolfhounds, who also have a dog for their mascot.

Ultimately, the SVRC sponsored the work and provided startup funds so Martin could procure specialized art supplies needed to get the project underway. This is the second work of student veteran art sponsored by the SVRC. In 2015, Campus News authored a story on Kelly Beavers’ painting titled “Forged by Fire”

“There is a uniquely rich story behind the journey of each of our student veterans to UGA” said Barco. “This Veterans Day, I am thankful for the opportunity to help Eric share his story of resilience with our campus and community partners.”

Martin’s goal was to create a piece of art that reflects the student veteran journey.  “I’m trying to create a symbol that everybody can relate to. I hope that I capture that in this painting,” he said.

Ultimately, Martin hopes the piece shows “the importance of remembering those we have lost, the honor of service to our country, and the student veterans’ perseverance and dedication to self-improvement through higher education.”