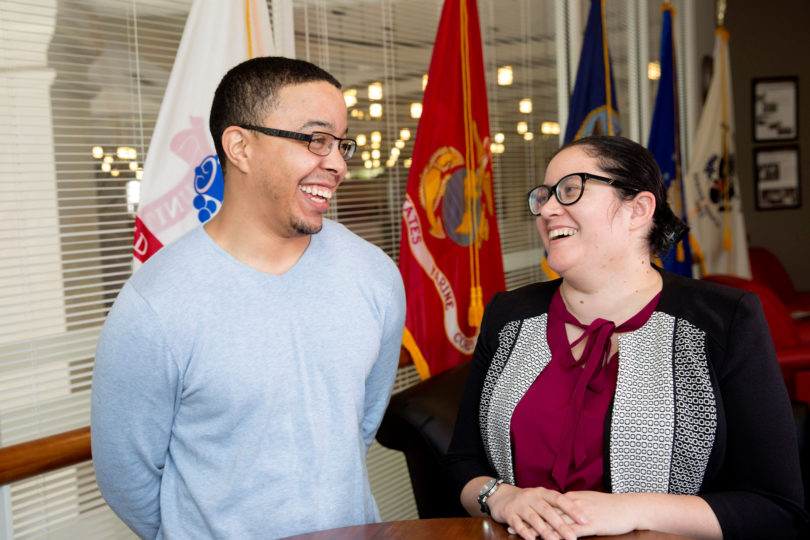 UGA has programs in place to help student veterans

Undergraduate Jamal Shelton spent most of his military career performing the difficult, but necessary, task of handling the remains of U.S. Marines killed in service.

Shelton, who plans to apply to the Terry College of Business, spent much of his time in the Marine Corps’ Mortuary Affairs unit in Marietta. But he also did a tour in Afghanistan. His unit handled the evacuation and receiving of remains of fallen service members in Afghanistan before they were returned to their families at Dover Air Force Base.

“The job was probably one of the most respectable and honorable things that I will ever do in my life,” Shelton said. “I was proud to be that buffer—that first line in the long process of giving the fallen hero a proper burial.”

Shelton is one of about250 student veterans who bring a range of backgrounds and ­experiences to UGA.

In recent years, the university has made a concerted effort to support its student veterans through work spearheaded by Ted Barco, a 32-year veteran of the national security community and current director of UGA’s Student Veterans Resource Center. Launched in 2013, the SVRC aims to ease veterans’ transitions onto campus and to help them make the most of their UGA education through integrated services like its career-readiness programs.

“As some of our student veterans move from a culture of structure to one of nuance, our programs strive to help them appreciate and then develop the trusted networks they will need to succeed at UGA and beyond,” said Barco. “These networks would not be possible without active partnerships, which we continue to build across UGA and the community.”

There are signs of success with a graduation rate among UGA’s student veterans at 85 percent—well above the national average of 48 percent for veterans and on par with UGA’s nonveteran students.

Shelton, who always dreamed of being a Georgia Bulldog, said his first few weeks at UGA were tough—especially with the size of the campus and so few familiar faces around him, a sentiment echoed by other student veterans. But having a place like the Student Veterans Resource Center and a student-run organization like the Student Veterans Association helped Shelton find people he could know and understand.

“I know there is a home base here,” he said.

The center is a home base for other student veterans, too.

Because she is a few years older than most of her classmates, Maria Munoz, a former Air Force intelligence analyst, gets most of her social interaction from other student veterans at SVRC.

“This place makes me feel like I belong on campus,” said Munoz, an anthropology major who expects to graduate in May. “This center has been critical for my continued success because of the resources and opportunities offered to me.”

Although she feels most comfortable with other student veterans, Munoz still has dived into the student experience at UGA. This fall, she joined the Student Government Association as a senator to provide a voice for veterans and other nontraditional students. Munoz also is strengthening her resume with undergraduate research through the Center for Undergraduate Research Opportunities.

Joe Mahoney, a combat veteran and management information systems major in the Terry College of Business, served seven years in the Army infantry, where he said he learned a lot about leadership. When he was discharged from military service, Mahoney worked at the UGA Police Department for five years as a detective in the investigation unit before committing to finishing his degree full time when his daughter, Lola, was born last year.The Student Veterans Resource Center has helped reinforce the belief that he needs to continue to challenge himself to ensure success. That’s why Mahoney already is looking for a summer internship and other experiential learning opportunities.

Once he combines a “pressure-tested ability to make decisions” with a high-quality education and experiential learning opportunities, Mahoney believes he’ll have the chance to compete for jobs in his field.

While student veterans may fall into the category of “unconventional students,” they really share some of the same goals as their classmates, Shelton said.

“We’re just like any other student in that we’re trying to be successful,” he said.