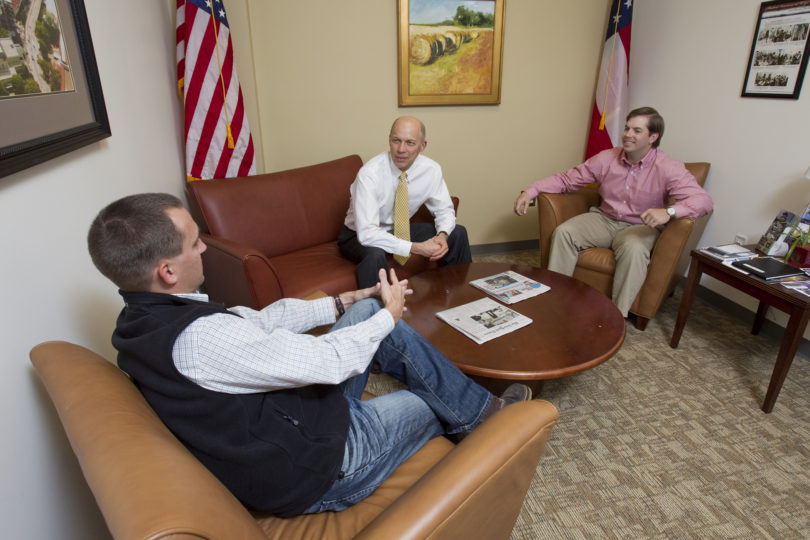 Matthew Fowler, a senior political science major from Loganville who served in the Navy for four years, was surprised when he enrolled at UGA in 2012 and could not find an organization on campus for students who were military veterans.

At the time, he said, there was no singular group with which student veterans could meet, socialize and share their experiences of military and school life.

To fix this problem, Fowler and Mike Lancaster, a military veteran who graduated from UGA in May, founded UGA’s Student Veterans Association in 2012.

But what started as an attempt to create a student organization turned into something bigger.

The student group subsequently worked with Dean of Students William McDonald to start a Student Veterans Resource Center, a new unit on campus dedicated to pairing student veterans with the campus services they may need.

“I am very excited about the efforts the University of Georgia has undertaken to recruit, retain and graduate student veterans,” McDonald said. “Student veterans have provided invaluable service to our country and the world. Because of their service, they bring a unique perspective to classroom discussions and out-of-class activities.”

Charles T. Barco, a retired lieutenant colonel for the U.S. Air Force, started as director of the SVRC in September.

According to the U.S. Defense Department, there are about 500,000 student veterans enrolled in undergraduate courses in the U.S.

Barco, who currently is trying to identify student veterans at UGA, estimates there are probably fewer than 250 enrolled, but a stronger support system for veterans at UGA could help that number grow.

Many student veterans, like Fowler, are beneficiaries of the Post-9/11 GI Bill. Those benefits help pay for Fowler’s tuition, books, supplies and living expenses.

Creating a home at UGA for student veterans is important not only from a recruiting perspective, Barco said, but it’s also good for increasing the diversity of the university’s student population.

The experiences veterans bring to UGA classrooms, Barco said, are an asset to the learning environment.

“They are very entrepreneurial,” he said. “They are great at adapting knowledge across disparate contexts.”

Still, despite the incentives for veterans to attend college, Fowler said coming to college could be a difficult transition for veterans.

For him, switching from a structured atmosphere in the military to living the more independent lifestyle of a university student was a difficult transition.

A good support system and understanding from university administrators can help that transition, Barco said.

On the other hand, Fowler-who admits he wasn’t a great high school student-said the military also gave him the confidence and self-discipline to do well in college. As a veteran and current Navy reservist, Fowler said veterans don’t think they deserve special treatment, but he was surprised by what seemed like a lack of an environment for veterans to fellowship.

“I just wanted to look out for the veterans who come after me,” he said.

When the newly formed Student Veterans Association approached the dean of students office about resources for student veterans, Fowler said, their ideas were welcomed.

“I would say they have gone above and beyond what would be expected from a university to serve veterans,” Fowler said.

Not only did the Division of Student Affairs establish a lounge in the Tate Student Center where veterans can meet and study, but it also created the SVRC with Barco as its director.

Barco, who served in the Air Force for 20 years and then worked for defense and national security agencies in Washington, D.C., for another 12 years, said the role of the SVRC is to bolster support for student veterans and raise awareness about their presence on campus.

In the beginning stages of his job, Barco is trying to connect with veterans and identify their needs.

Most of those needs-health care, tutoring, financial aid-he suspects, already exist for the general student population. Barco said his job is to build a bridge for those services to student veterans.

To do so, Barco is meeting with UGA faculty and staff who oversee functions that intersect with student veterans.

If he hasn’t engaged an office yet, Barco said, chances are he will.

“The university is exceptionally well positioned to support the veteran population,” he said. “The challenge is the veteran may not know those services are there.”