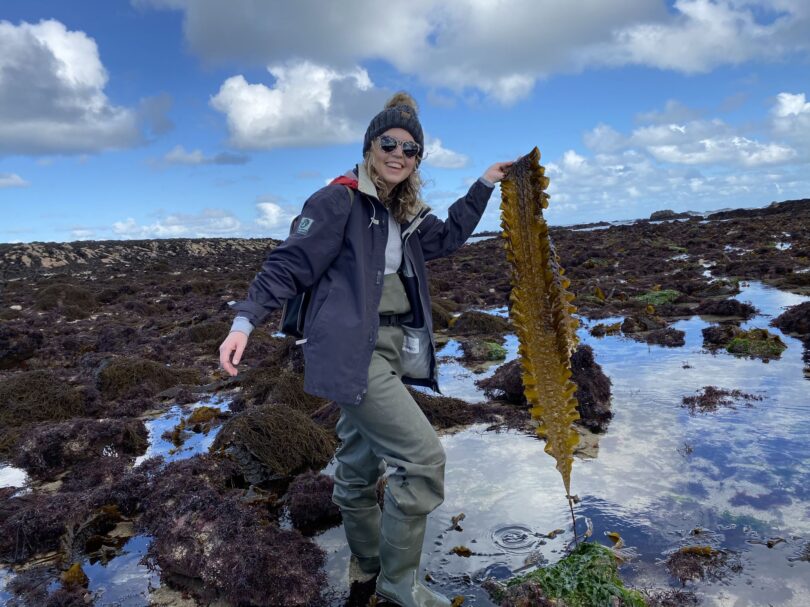 CAES alumnus Allison Fortner holds up a leaf of Saccharina latissima amidst a dense population of wild seaweed in Plougeurneau, France. (Submitted photo)

Her work with the Safe Seaweed Coalition is reaping dividends

When you hear the word agriculture, seaweed might not be the first thing that comes to mind.

But Allison Fortner, a University of Georgia doctoral student pursuing a degree in the Department of Agricultural Leadership, Education and Communication, is doing her part to help raise the profile of this important marine species.

Fortner recently completed an eight-week international internship both in Paris and on France’s Brittany Coast, where she worked as a science communicator with the Safe Seaweed Coalition, a global partnership established in 2021 to support a safe and sustainable seaweed industry. The internship fulfilled the requirements of Fortner’s International Agriculture Certificate in the College of Agricultural and Environmental Sciences. 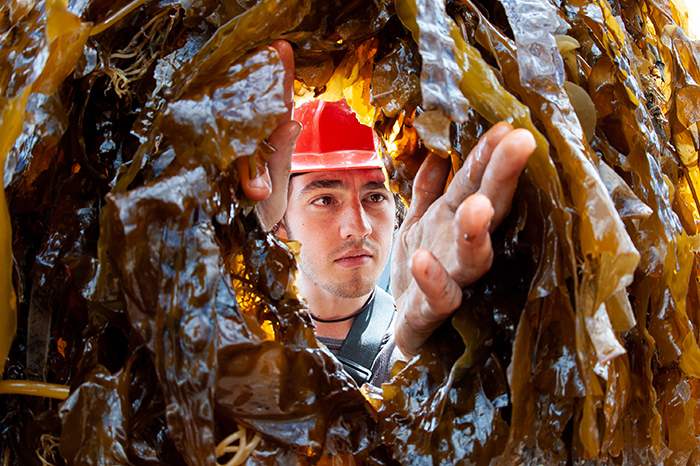 A seaweed harvester puts his hand through a large mass of Saccharina latissima. (Photo courtesy of the Scottish Association for Marine Science)

As the seaweed industry continues to expand worldwide, the coalition works to ensure safety for workers, consumers and the environment. One way they do that is by awarding targeted small grants twice a year to accelerate safety in the seaweed sector. Fortner helped facilitate communication with and about the grant recipients through press releases and social media posts.

Another goal of the coalition is to improve awareness of the applications and environmental significance of seaweed among global audiences. Fortner coordinated the group’s Seaweed Ambassadors, seaweed enthusiasts who want to be involved in the coalition’s advocacy efforts. 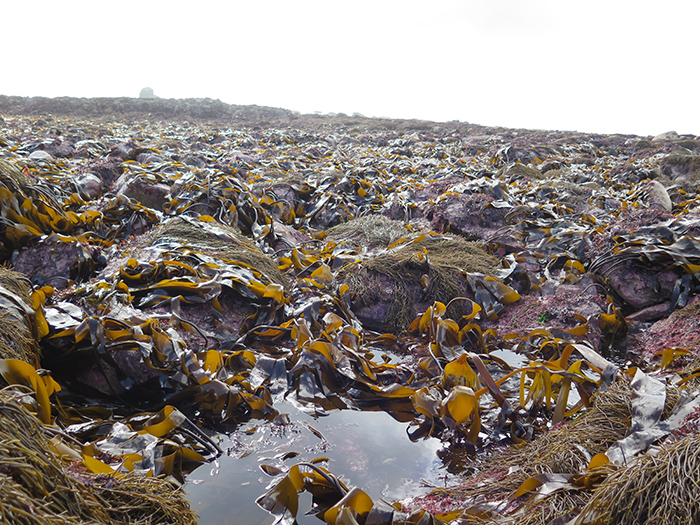 Several species of seaweed growing in the intertidal coastline. (Photo by the Safe Seaweed Coalition)

“I had the privilege of establishing the Seaweed Ambassadors Program, a group of people seeking to share evidence-based information about seaweed while using accessible language within their existing networks. I built a framework for and coordinated the activities of the first and second cohort of Seaweed Ambassadors,” Fortner said. “I used the skills learned in my communication, leadership and education classes to tailor messages to the ambassadors, create orientation materials and activities for them, and evaluate the success and engagement of our meetings.”

At the conclusion of her internship, Fortner continued working with the organization as a Seaweed Ambassador herself, joining 21 other ambassadors around the world, sharing information about the full potential of seaweed.

The many uses of seaweed

But what is the full potential of seaweed?

Seaweed, also referred to as macroalgae, is an incredible marine organism. Alongside microscopic algae, it is responsible for around half of the photosynthesis on our planet — which means it provides about half of the oxygen that we breathe, no matter where we live on Earth.

Fortunately, some species of seaweed grow incredibly fast — giant kelp for example can grow up to 24 inches per day in ideal conditions.

“Just like crops on land, seaweed has seasons. There are times of year when people who harvest wild seaweed are allowed to access the wild seaweed populations and collect them, while they have to leave them to optimize growth during other parts of the year,” said Fortner.

While it may not be typically associated with agriculture, seaweed has made important contributions to the agricultural field for hundreds of years. Long ago, farmers took seaweed that washed up on the beaches and put it onto their fields as a form of fertilizer. Fast forward a few decades, and this idea has transformed into applying seaweed extracts in the form of biostimulants on a variety of crops to enhance the plants’ nutrient uptake and drought tolerance. 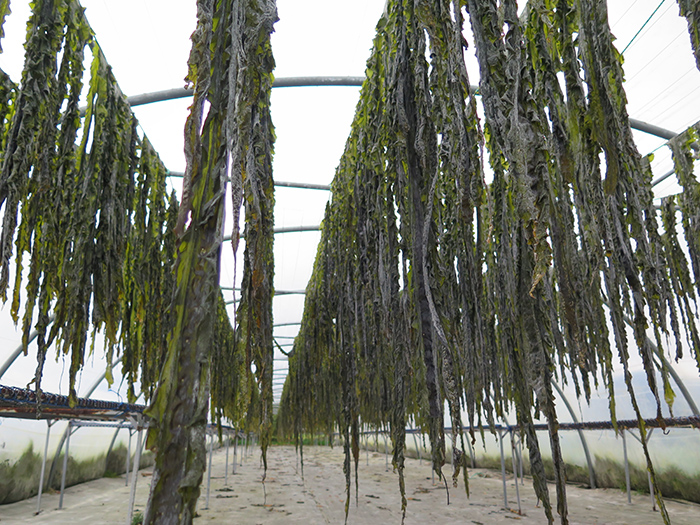 Seaweed drying on racks. (Photo by the Safe Seaweed Coalition)

Seaweed has myriad human uses as well. Seaweed as a food product is one of the fastest growing sectors, currently valued at $9 billion annually. Of course, if you’ve ever had sushi, you are well acquainted with seaweed.

And seaweed-based snacks are becoming more mainstream on grocery store shelves. There’s even a species of seaweed known as “sea truffle” because its flavor resembles that of truffles found on land. Seaweed has also long been used as a thickening agent in foods and is featured prominently in cosmetics, pharmaceuticals and vitamin supplements.

The plant’s potential is still untapped

There are big plans for the future of seaweed as researchers continue to unlock its full potential.

“We are still very much in the ‘hunter-gatherer’ stage of seaweed outside of Asia. While a select few species of algae have been domesticated and cultivated for commercial use, there is more work to be done to determine the best species that will serve specific needs and how best to grow those species,” said Fortner. “Understanding how to do this while not disturbing ocean ecosystems, using too much energy or introducing invasive species and disease may be a challenge.”

Despite the challenges, researchers and industries are working to tap into the full promise of seaweed. Seaweed is already being used by startup companies as a replacement for plastic packaging, and innovations in bioprocessing are being developed to extract high-value compounds from seaweed. 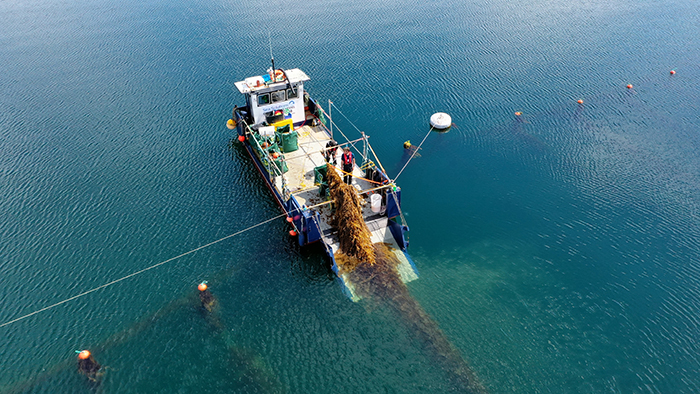 A boat harvesting the seaweed species Saccharina latisimma. (Photo by the Scottish Association for Marine Science)

It’s also being used as fibers in clothing and as a method of removing carbon from the atmosphere. And there’s a flurry of research being done with seaweed in animal agriculture — adding seaweed to livestock diets has been found to reduce the need for antibiotics and it may also reduce greenhouse gas emissions from some animals, including cows.

Seaweed has the potential to significantly contribute to at least nine of the United Nations’ Sustainable Development Goals. Increasing the growth and use of seaweed would provide employment for millions of people on every continent and serve as an important source of nutrition for the world’s growing population. As our climate warms, seaweed’s ability to absorb carbon can help fight the climate crisis, positioning it to become one solution to many of the problems our planet is facing.

And the Safe Seaweed Coalition and its ambassadors will be there along the way, ensuring that the industry will continue to be safe for consumers, workers and the environment as it scales up.