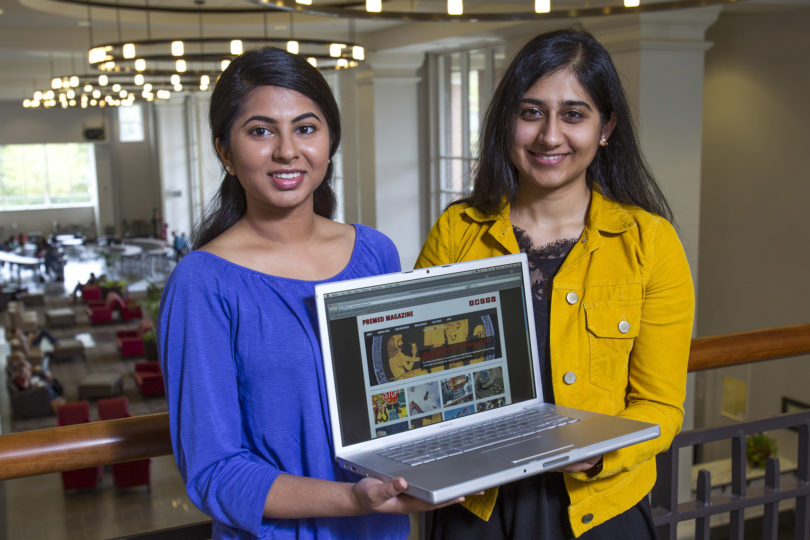 For aspiring medical doctors, the academic road to fulfilling their dreams takes years of hard work and planning.

For Shajira Mohammed, a biology and psychology major from Alpharetta, just figuring out which UGA premedical school student groups she should attend was mystifying for her as a first-year student.

“I was facing the idea of not knowing which meeting for all of these various premed clubs to attend-and many of them fall on the same day,” said Mohammed, now a third-year student. “I remember thinking, ‘I wish I had this source where I could read about the information presented in these clubs.’ ”
That idea-to help premedical students, like her, figure out how to prepare for medical school-drove Mohammed to create PreMed Magazine.

PreMed Magazine, available at http://www.premedmag.org, and it includes a story about bizarre medical careers by Linh Thanh Dinh, a second-year French and biology major, and a history of how the discovery of penicillin revolutionized medicine by Ahmed Mahmood, a third-year biology major.

The magazine, which is supported through the Franklin College of Arts and Sciences and the Grady College of Journalism and Mass Communication, is now in its third year of publication. In that time, PreMed Magazine has had more than 15,000 page views and is followed by a few hundred people through online social media.

Thus far, the magazine only appears online, but Aashka Dave, managing editor of PreMed Magazine and a third-year public affairs journalism and Romance languages major, and the rest of the student editorial board are looking for ways to get it in print.

Leara Rhodes, faculty adviser to the magazine and an associate journalism professor in the Grady College, said she is impressed with the work done by the editorial staff in taking Mohammed’s concept and turning it into a finished product.

Mohammed came to Rhodes upon the recommendation of another faculty member. Since Rhodes has expertise in magazine writing and production, she agreed to help Mohammed turn her goal into a reality.

Throughout the process, Rhodes has noticed Mohammed’s growth in public speaking, articulating her ideas and working with a diverse group of people-skills that should serve Mohammed well after graduation.

But Rhodes has gotten something in return for advising PreMed Magazine.

“What I’ve learned as a faculty member is to never say ‘It’s not my job,’ ” Rhodes said. “You can be really blessed by the excitement a student brings with an idea.”

Mohammed and Dave also can provide a list of lessons they’ve taken away from their experience with the magazine. Both students said that getting involved in the magazine has enhanced their student experience at UGA.

Dave said writing and editing medical stories has compensated for her lack of science coursework in recent semesters. But Dave said the magazine also is helpful exposure to potential career goals.

“It’s a great way to get actual practical experience doing what I possibly want to do with my life one day,” Dave said.

For Mohammed, the magazine not only allowed her to answer questions about being a premed student, but it also challenged her to stretch intellectual muscles that haven’t been exercised often in her coursework.

“As a science major, we’re just reading books and learning information. You don’t get to express that creative side of yourself,” Mohammed said. “In a way, PreMed Magazine has become the source of my liberal arts education.”