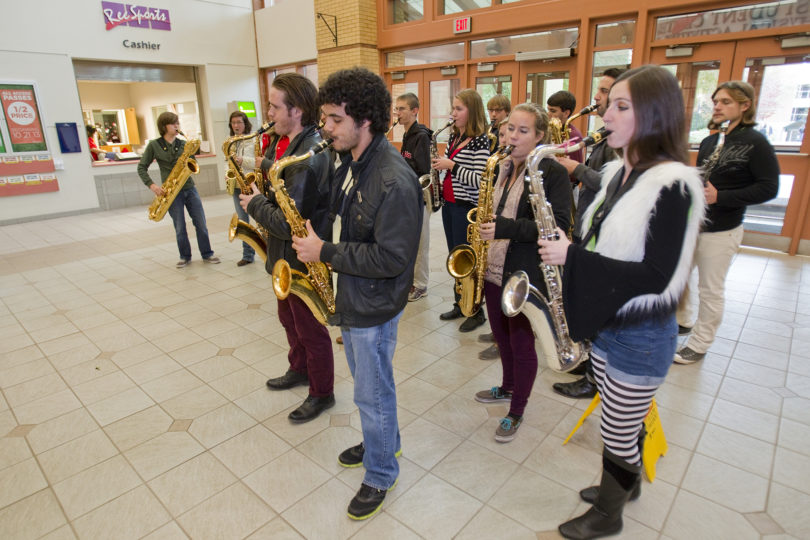 The UGA Saxophone Studio from the Hodgson School of Music performs at the Ramsey Student Center for Physical Activities. The Saxophone Studio toured the Athens campus as a saxophone flash mob as part of the Spotlight on the Arts.

The 2013 Spotlight on the Arts festival, like the inaugural Spotlight festival in 2012, attracted some 15,000 people from the university and surrounding community to a range of arts events and activities at venues on and off campus.

Member units of the UGA Arts Council presented more than 60 events from Nov. 7-15 highlighting the performing, visual and literary arts at UGA. Student groups also gave informal performances at indoor and outdoor locations, including a saxophone studio flash mob that brought students at the Ramsey Center and the Village Summit flocking to see what was happening.

Among the highlights of this year’s festival was a sold-out performance of Hal Holbrook’s one-man show as Mark Twain, plus popular productions of Carmen by the University Opera Theatre and Pride and Prejudice by the University Theatre. Film festivals, special events at the Georgia Museum of Art and Lamar Dodd School of Art, an induction ceremony for the Georgia Writers Hall of Fame, and a dirty book sale by the UGA Press also drew enthusiastic crowds.