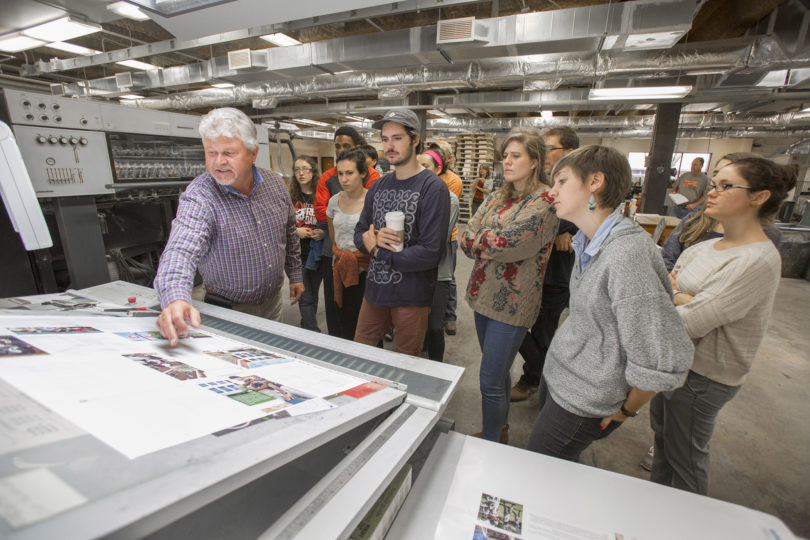 Surrounded by massive machines and piles of paper, the students in Julie Spivey’s graphic design class beamed with pride as they saw their hard work roll off the press during a tour of UGA Printing and Duplicating last month. The class had created individual business cards, and after a tour of the printer in the building next to the Performing Arts Center parking deck, the students were able to examine the end product.

Caitlin LeMoine, a junior, said she was pleased with how her cards turned out.

“Seeing the difference between what was on the computer screen and what was printed was really interesting,” she said.

Spivey, an associate professor of graphic design in the Lamar Dodd School of Art, said seeing those differences between on-screen design, ink-jet printouts and press-run products was one of the purposes of the UGA Printing and Duplicating tour.

“This is just completely eye-opening to them. They’ve been designing on a screen for an ink printer, so this is something totally new,” Spivey said. “You can talk abstractly about printing and such, but it doesn’t really register until they’re here smelling the ink and seeing the press in action.”

Prior to seeing their printed business cards, the students began the tour with an explanation about offset printing from assistant manager Jeff Allen. Offset printing is a process in which images or designs are transferred from a plate to rubber blankets or rollers, then the printing surface.

After the lesson on the printing technique, Ken Storey, a senior graphic designer at UGA Printing and Duplicating, showed the students some mistakes they made when designing their business cards and how to correct those issues. He also gave some tips on how graphic designers can work with staff at a printing press to keep the cost of a project low and save time.

Julie Rodriguez, a third-year graphic design major, said she learned a lot about the process of getting a final product.

“Being a designer doesn’t mean just coming up with ideas and making something,” she said. “You really have to understand all the steps of the process, all the way down to getting it in your client’s hands.”

Spivey said one of the reasons behind the press tour—something she does with her class every semester—is to show students that they will be working with other professionals to produce their work.

“It also makes them realize that as designers they would need to establish relationships with the printer they’re working with because they are the professionals who know all of this,” she said.

Allen, who has led many tours for Spivey’s classes, said that he enjoys showing the students around because not everyone understands what all goes into the printing process.

“It’s hard to design for printing, and I like that this tour shows the students how it’s different and what all they need to do to do it right,” he said.

Jake Green, a senior graphic design major, said he learned how complicated the printing process can be. He said the tour gave him a solid foundation for working with a printer, but he knows there’s still more he needs to learn.

“In my mind, I could just print it out at my home printer and everything will just be fine, but to get a bunch more prints out, I have to work with a printer, and to do that I need to know a lot more,” he said. “I feel like I’ll learn a big part of it by just having experience working with a printer though.”

Max Harrell, manager of UGA Printing and Duplicating, sees visits and tours as the perfect avenue to be more connected to students.

“We’re excited about being able to bridge the gap from being strictly a production area to being a positive experience for students and to be more student related,” he said. “More involvement with the student body will allow those who have an interest in this area to benefit from hands-on experience.”