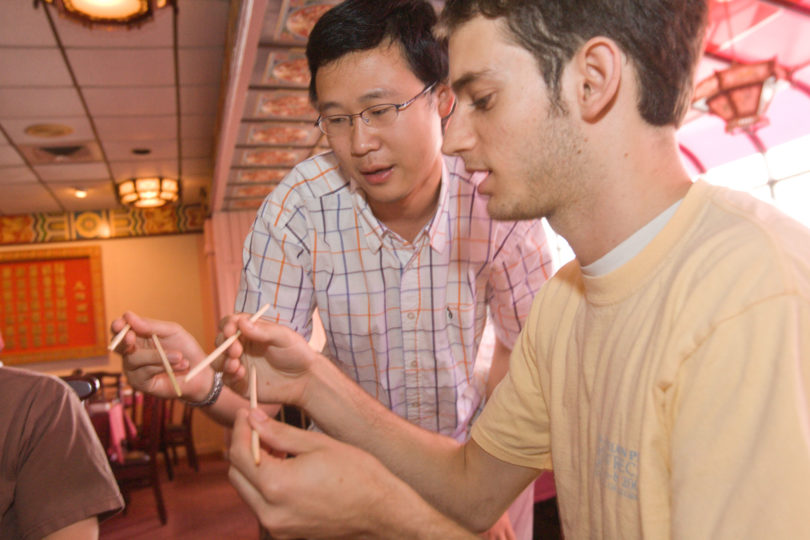 “Shee Shee” says Molly Freeman, a senior majoring in finance, as she strolls out of the lobby of the Peking Restaurant on Atlanta Highway the day before she and 12 other Terry College of Business students board a 15-hour flight to China.

The phrase she’s trying to say means “thank you” in Mandarin Chinese, and it carries weight in a society that prizes serving others and gift giving. She learned this at a lunch that brought together UGA students traveling to China with several Chinese students from various campus organizations.

The etiquette lunch’s goal was to let Chinese students tutor their Americans peers about special customs and Chinese culture to ease their transition to the famously walled-off country.

“In China, the tea is usually served hot; it’s not like the sweet tea you are used to,” said Huanyao Gao, a third-year graduate student in chemistry and president of the CSU. “But they will give you cold tea, but you have to ask for it.”

Gao also led a presentation on proper chopstick usage (“Don’t worry, there is no right way,” he said) and fielded questions about the proper way to greet adults in China and what American students can expect to eat while there.

“Let older people and those of high rank eat first,” Gao said. “And the white wine they serve with meals is much stronger than it is here, so be careful of that.”

Yan Li, another Chinese student, told her group about gift giving. While gifts are always appreciated in China, she said, there are certain rules to which students should adhere.

“Always give gifts in even numbers,” she said. “Except the number four. That is associated with funerals. Six and eight are lucky numbers.”

The students from UGA are going for five weeks to take a course in the globalization of information technology. In China they will be paired with Chinese students on a daily basis during their labs.

“I definitely think I feel a little more prepared for the actual interactions with people now,” said Brandon Smith. “I’m not as nervous about that.”

The university has upped its effort toward studying abroad recently, with about 30 percent of students who graduated in 2007 having done so.

Living and studying abroad is part of truly understanding the global economy, but it can start at home, said Sarah Park, the international student and scholar adviser who helped organize the lunch.

“Students can still have that international experience here on campus, which is part of what programs like the etiquette lunch are about,” she said. “We have so many groups of international students right here on campus, that experiences with foreign cultures don’t have to end when students return home. We’re hoping to bring these groups back together once the students return, and hopefully they’ll keep in touch.”

The etiquette lunch was sponsored through a grant from the UGA Parents and Families Association and represents collaboration between the Office of International Education, International Student Life and the UGA Career Center.