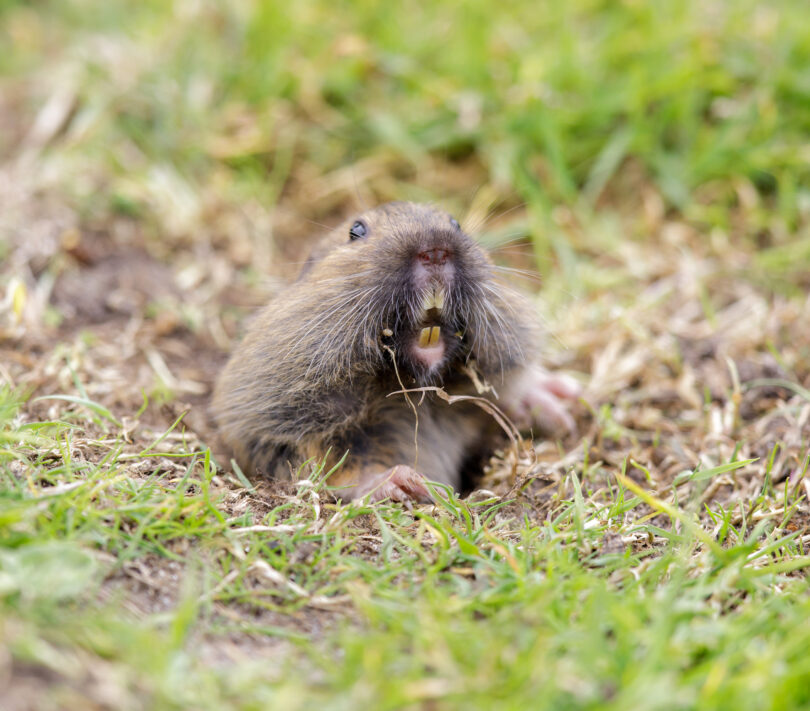 A pocket gopher peeking out of his hole. (Getty Images)

Researcher discovers that the underground species has a secret glow

You can learn a lot about animals by simply watching them. But some secrets can only be revealed in the dark … with an ultraviolet flashlight.

This happens to be the case for pocket gophers, small rodents that live underground in sandy soil. A new paper by University of Georgia researchers found that these feisty, solitary, round-cheeked animals have a special skill that’s only revealed under ultraviolet light: They are biofluorescent, giving off a colored glow when illuminated with UV light.

Published in The American Midland Naturalist, this is the first time biofluorescence has been documented in pocket gophers. J.T. Pynne, a recent Ph.D. graduate of the UGA Warnell School of Forestry and Natural Resources and lead author of the study, said he was inspired to shine a light on the possibility a few years ago, after reading similar studies documenting the phenomenon in flying squirrels and opossums.

“A bunch of people, myself included, were curious about other animals,” said Pynne, now a private lands wildlife biologist with the Georgia Wildlife Federation. So, he turned to Warnell’s collection of animal specimens.

“We tested it on the flying squirrels we had, and sure enough, it worked. So, I said, ‘Well, what else do we have?’” During his time at Warnell, Pynne focused his research on pocket gophers, which are short-tempered and live in underground tunnels. So, he turned his UV flashlight toward those he had on hand. “And it turned out, pocket gophers, flying squirrels and opossums were the only animal specimens that fluoresced. And I’m thinking, of course my strange little animals do this.”

This was in 2019. At the time, identifying organisms that glowed purple, orange or pink under a black light was a bit of a thing in certain scientific circles. What started with the revelation of the flying squirrel snowballed into several other fluorescent discoveries, such as the nocturnal springhare and the platypus. Biofluorescence has also been documented in birds, salamanders, spiders and scorpions, among other organisms, said Warnell professor Steven Castleberry.

A UV light is required for humans to see biofluorescence. 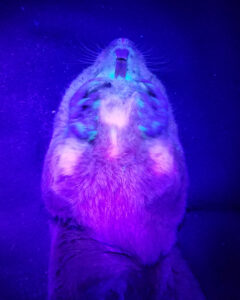 “Just in the past few years, there’s been this uptick of people shining UV light on mammals to see if they glow. So now people have started to ask, why do they fluoresce?” added Castleberry. Whether the fluorescence is a defense mechanism, a communication method, camouflage or simply a trait from earlier eras is anyone’s guess at this point. “There’s some speculation and hypotheses, but nobody really knows the truth.”

While the reason for pocket gophers’ and other animals’ ability to glow under ultraviolet light is still up for debate, Pynne said it can serve as a unique introduction to the animals’ world. With UV flashlights readily available, most anyone can highlight a foraging opossum in their backyard, for example, or watch how different insects light up at night.

“We have known for a long time that arthropods fluoresced. Any time I catch a scorpion or a spider or a millipede and I have my black light, they’re bright blue,” said Pynne, who keeps an ultraviolet flashlight in his backpack whenever he’s exploring new places. “It’s probably more of a cool teaching thing than anything.”

Although pocket gophers, with their long, curved teeth and penchant for burrowing, would rather be left alone, thank you very much.