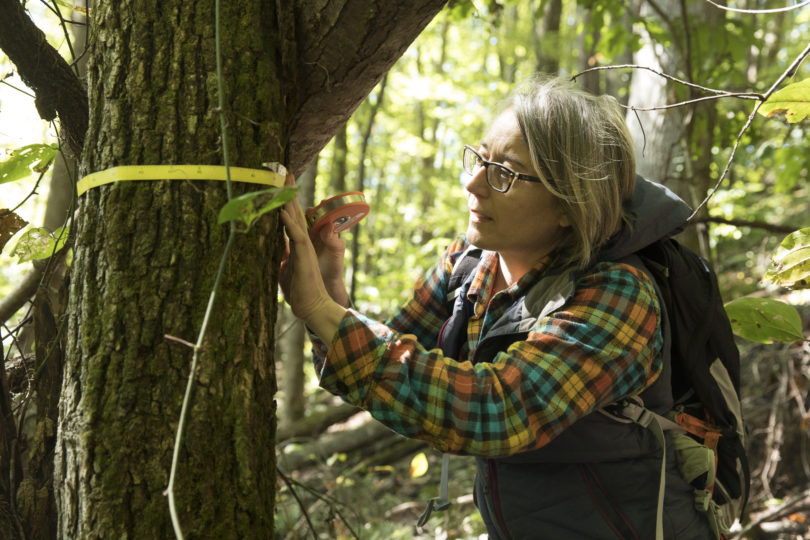 The longleaf pine forests of the southeastern U.S. depend on frequent fire to maintain their structure and the diversity of plants and animals they support. New research from the University of Georgia has found that fire may be playing another, unexpected role: releasing excessive nitrogen that appears to have accumulated as a legacy of prior land use.

The paper, “Nitrogen fixation does not balance fire-induced nitrogen losses in longleaf pine savannas,” was recently published in Ecology.

“It was not what we were expecting,” said senior author Nina Wurzburger, an associate professor in the Odum School of Ecology. “We first were wondering whether there was enough nitrogen fixation to balance nitrogen losses from fire, and now our hypothesis is that fire might be necessary to remove excess nitrogen from these ecosystems. We basically turned the question on its head.”

Longleaf pine forests are considered one of the most endangered ecosystems in North America. Once covering 90 million acres stretching from Virginia to Texas, they are now found on only about 3% of their original range. Much of the longleaf that exists today was planted as part of restoration efforts by public and private landowners. These forests are managed with controlled burning. 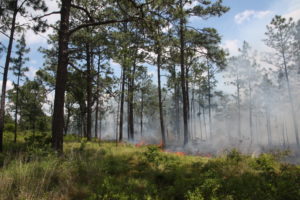 But fire, though necessary, removes nitrogen—a nutrient essential for tree growth—from the soil. Nitrogen is returned to the system chiefly through a process known as fixation, in which soil microorganisms take nitrogen from the atmosphere and convert it into forms usable by plants.

“One big hypothesis is that nitrogen-fixing organisms can replenish the nitrogen lost through fire in fire-dependent systems,” said lead author Julie Tierney, a master’s student at the Odum School of Ecology at the time of the research.

This was the idea that she, Wurzburger and their colleagues set out to investigate as part of a five-year study funded by the Strategic Environmental Research and Development Program of the U.S. Department of Defense—responsible for managing hundreds of thousands of acres of longleaf pine at southeastern military installations—in partnership with the U.S. Department of Energy and the U.S. Environmental Protection Agency.

The research was conducted at Eglin Air Force Base in Florida and Fort Benning in Georgia, on land that had been used for farming, grazing and forestry before its acquisition by the Department of Defense in the 1930s.

Wurzburger and her team established 54 2.5-acre plots, 24 at Fort Benning and 30 at Eglin. These included both planted and naturally regenerated stands of different aged trees, ranging from 2 years to 227 years old, and stands with different fire return intervals, from 1.5 to 20 years.

For each plot, they calculated how much nitrogen was being fixed by bacteria that associate with the ecosystem’s legumes, like indigo or prairie clover, or live in the soil. They also took into account atmospheric nitrogen deposited on the plots from sources like rainwater and fertilizer-laden dust from agricultural fields. Then they calculated the amount of nitrogen being lost to fire, comparing soil and vegetation samples from before and after each fire event from each plot.

While there were differences depending on site location, stand age and fire frequency, overall they found a substantial deficit in nitrogen inputs compared to outputs. On average, only 38% of nitrogen lost to fire was being replenished through fixation and atmospheric deposition. But they also found, to their surprise, that despite those losses there was plenty of nitrogen in the soil and no evidence of a decline in tree growth.

“We came to the conclusion that fire might be getting rid of excess nitrogen,” said Wurzburger. “Most of the longleaf pine that exists today has been planted, and those areas have legacy effects of agriculture or grazing or fire exclusion. Our research is suggesting that all those things, and nitrogen deposition too, have put too much nitrogen in the ecosystem. So maybe we should think about fire as a management tool to remove nitrogen that accumulated historically, and to help return these ecosystems to their natural nitrogen-poor state.”

Understanding the interacting role of fire and historical disturbances in longleaf ecosystems is important for several reasons, including carbon sequestration and the conservation of biodiversity: longleaf savannas can contain more than 40 species of plants in a square meter, and harbor a number of rare species of plants and animals, including the federally endangered red cockaded woodpecker.

“There have been tons of efforts for the past couple of decades to replant stands of longleaf pine and restore this important ecosystem for endangered species,” said Tierney, who is now at Princeton University. “In order to inform management decisions we need to understand what is happening to the biogeochemistry of this system, what’s happening to nutrients that supposedly limit the growth of these trees. This study provides the first rigorous test of inputs and outputs of nitrogen to these systems, and it got me to think about fire-dependent ecosystems in a new way.”

The study was co-authored by Lars Hedin of Princeton University.