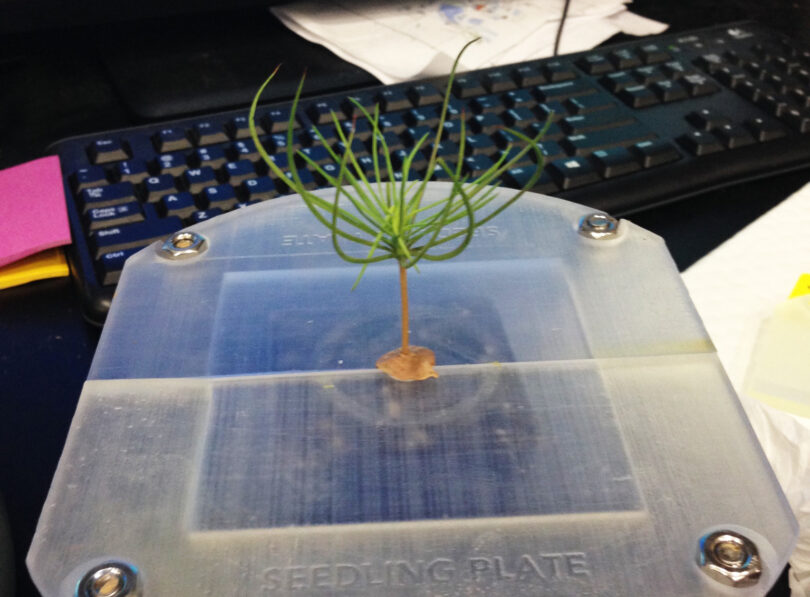 A seedling used in the study.

The first few weeks of a tree seedling’s life can be the most precarious.

As it pushes thin new roots into the ground it’s also reaching up with tiny new leaves. Water and energy are precious. Most seedlings never make it past their first month on the ground.

But while much is known about the growing process, there remains a layer of mystery around the mechanisms within these small plants. Now, a new study by a University of Georgia researcher sheds some light on the microscopic tissues that help tree seedlings grow. The results could change how researchers and growers view the first weeks of a tree’s life. 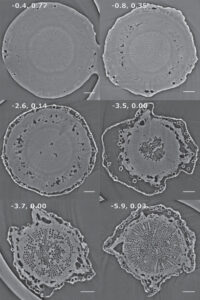 An image of what the seedling looked like over 24 hours or so without water. As it starts to dry out, the central core of it generally remains intact. (Submitted photo)

“I’ve been working on newly germinated seedlings for 20 years, and I feel this is one of the first breakthroughs for me about how different they are, even from a 20-week-old seedling,” said Dan Johnson, an assistant professor of tree physiology and forest ecology at the UGA Warnell School of Forestry and Natural Resources. “It’s these first few weeks of life that seem to be fundamentally different.”

Johnson and a team of researchers used a high-powered X-ray called a synchrotron to take extremely detailed cross-section images of ponderosa pine seedlings at various stages of hydration. Located at the University of California-Berkeley, the synchrotron accelerates electrons to nearly the speed of light, and while they will instantly kill a human cell, plants, it turns out, can withstand the intense power for a short period of time.

So, Johnson and his collaborators X-rayed the intact stem of the pine seedlings over several days, taking images of what was going on inside the plant. The pictures show extremely detailed black-and-white images that detail pockets of hydrated cells in gray. As the images progress and the seedlings dry out, black pockets of air can be seen on the images, almost as if the stems are being eaten from the outside in.

… what we found was, it wasn’t the xylem that dried out, it was all the tissue surrounding it.” — Dan Johnson

He and other researchers thought the plant’s xylem—a central nervous system of the plant, in a sense—would quickly dry up if it went without water. Turns out, they were wrong—and the resulting images offer never-before-seen insights into the first few weeks of a tree seedling’s life.

“The way we thought these seedlings were going to fail, hydraulically, as they dried out, was not at all how they failed,” he said. “We thought the vascular tissue—the xylem—was going to be filled with air. We call it embolism in humans. But what we found was, it wasn’t the xylem that dried out, it was all the tissue surrounding it. Even in some of the seedlings that looked like they were ripped apart (for lack of water), the xylem is fully hydrated.”

All plants have xylem tissue; it transports water throughout the plant. And in older plants, the xylem often does dry out as a plant faces drought. But the images that Johnson captured show that seedlings’ plumbing is completely different from their older cousins.

The findings were published in the August issue of the American Journal of Botany. The study was supported by two grants from the National Science Foundation.

“To me, this is the most vulnerable life stage. If a seedling is going to die, it’s going to die in the first few weeks of life,” said Johnson. “In the field, we see 99% of natural regeneration seedlings die—you’ll come back to the field one day and thousands have died. And they die in places where it just dries out too quickly.” 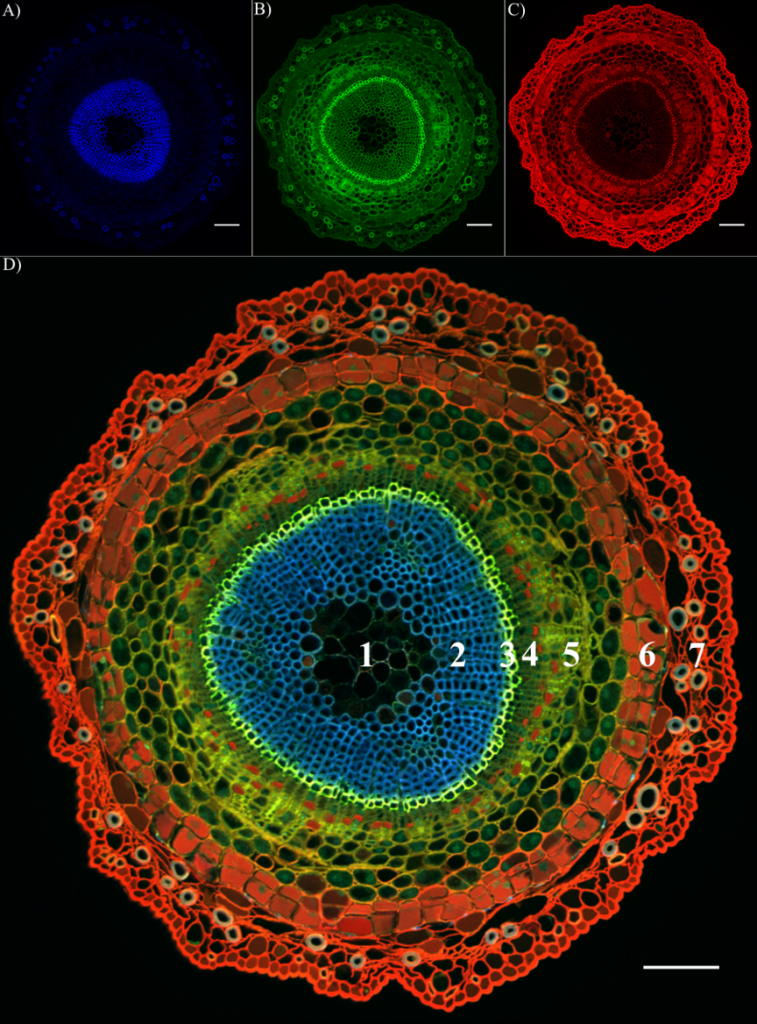 A color image made by shooting a laser at a cross-section of the plant. (Submitted photo)

Johnson said his findings point to how sensitive tissues outside the xylem are to water loss in the first few weeks of a seedling’s life. When a wild-sewn seedling survives, it’s often because that particular site had more favorable conditions, such as more moisture or the seed landed in a depression where it was more protected from the elements.

In addition to the detailed black-and-white images, the team also made corresponding color images of the seedling stems with a laser, using a process called confocal microscopy. Different cells reflect in different colors, creating a rainbow of circles that researchers can use to better identify parts of the stem.

But while the yellows, reds and blues are striking on the laser-produced images, the real eye-opener for Johnson was the black-and-white reality of the decimated, dried out stems and their central core, which was the last to give up.

“I was completely shocked. It was not what any of us on the paper expected,” said Johnson, pointing to one image of a withered stem that looks almost chewed up. “That’s at a desiccation level that would kill that plant. So, to have that xylem so full when it’s so dead is counter-intuitive.”

While the discovery may bring more questions than answers, Johnson notes that the survival of the xylem may change how plants’ first few weeks are understood. It’s almost as if, he said, the first leaves to emerge from a seedling are connected to a completely different set of tissues. “The xylem might not be the plumbing to the first few leaves of the plant, which is bizarre because that’s what we learned in plant physiology,” he added.