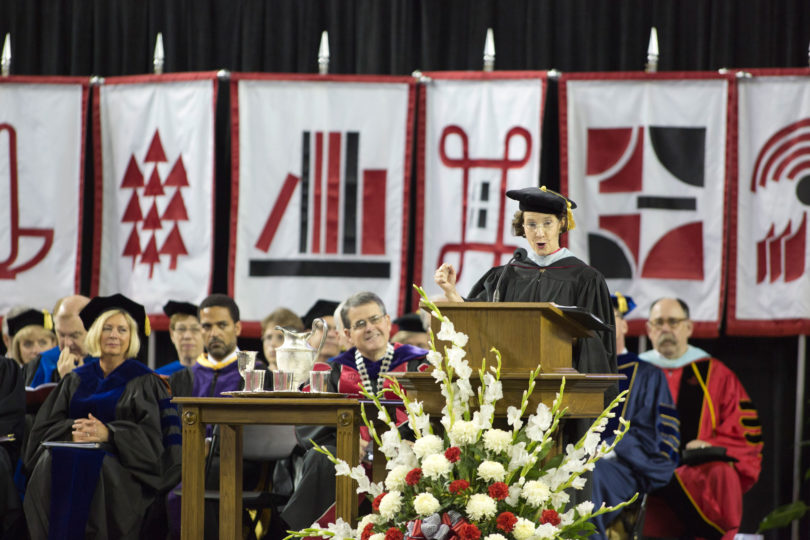 For the 1,499 UGA students eligible to walk in the 2013 summer Commencement ceremony held Aug. 2 in Stegeman Coliseum, their mission in recent years has been putting hours of studying into earning their degrees.

Commencement speaker Inez Moore Tenenbaum, chairwoman of the U.S. Consumer Product Safety Commission and a two-time UGA degree recipient, encouraged those graduates, who took to the coliseum floor in their caps and gowns, to be mission-minded as they now use their degrees to pursue the next stage in their lives.

“You’ve read the books, you’ve done the work, you’ve passed the exam. Now go out and use your University of Georgia degree and make a better world,” she said. “I know you can do it because the education you received at this university has given you priceless tools that you can use to be successful in fulfilling your own mission in life.”

Jere W. Morehead presided over Commencement for the first time as president of the University of Georgia.

In his opening remarks, Morehead encouraged graduates to keep their surrounding communities in mind as they pursue their careers.

“Make a difference, large and small, in everything you can and in every place that you go,” Morehead told them. “We now expect uncommon things from you because you are a graduate of the University of Georgia.”

Morehead introduced Tenenbaum, an alumna of UGA who received her bachelor’s degree in education in 1972 and her master’s degree in education in 1974. She also earned a Juris Doctor from the University of South Carolina in 1986. President Barack Obama appointed Tenenbaum in 2009 to chair the U.S. Consumer Product Safety Commission, a federal agency that regulates the manufacture and sale of thousands of consumer products. The commission has made headlines in the past for pulling unsafe items, like defective cribs and toys with lead, off store shelves.

Tenenbaum, who spent her early career teaching, was elected South Carolina’s state superintendent of education in 1998 and held the post until 2007.

“Welcoming back an alumna such as Inez, who plays such an important role in our federal government, is an honor for the University of Georgia,” Morehead said. “She has been an advocate both here and abroad for safer consumer products and has truly made our state and country a better place to live.”

In her address, Tenenbaum congratulated graduates on their academic success and told them their UGA degrees would work for them in pursuing their careers.

She encouraged the university’s newest alumni to dedicate themselves to a career-spanning mission while pursuing the next steps in their lives.

“If you approach your career mission-oriented, then your work will not be a job,” she said. “It will be your reason for living.”

Tenenbaum traced her own career path from fourth-grade teacher to federal commission chair back to her career’s mission.

“My passion has always been and continues to be improving the lives of children and families,” Tenenbaum said.

In addition to building a career based on a mission, Tenenbaum, like Morehead, also encouraged students to find their own ways to serve the community.

Before the graduates’ friends and families, she told them, “A fully realized life requires one that gives back to the community.”