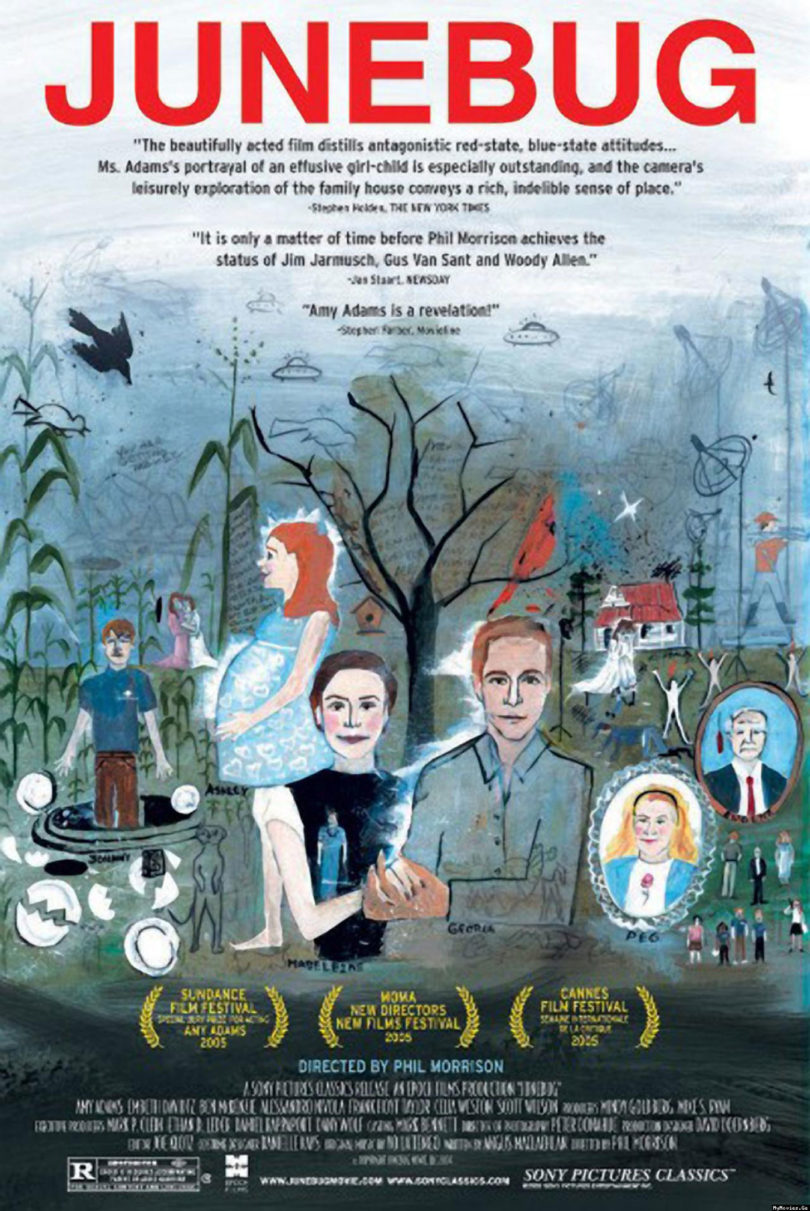 The film "Junebug" is part of the 2012 summer film series at the Georgia Museum of Art at UGA.

Athens, Ga. – The Georgia Museum of Art at the University of Georgia will hold a summer film series in June in conjunction with its “John Baeder” exhibition. Each of the films investigates an aspect of southern culture or the American roadside diner experience. The films to be screened are “The Rise of the Southern Biscuit” (June 7), “Waitress” (June 14), “Junebug” (June 21) and “Diner” (June 28). All films will be shown at 7 p.m. in the museum’s M. Smith Griffith Auditorium, and are free and open to the public.

“We are really excited to show the films in this series,” said Carissa DiCindio, curator of education at the museum. “They are meant to contextualize the exhibitions ‘John Baeder’ and ‘Southern Folk Art from the Permanent Collection’ and hopefully will help audiences see the works in new ways.”

“The Rise of the Southern Biscuit” is a documentary based on the book “The Biscuit Dive Guide” by Maryann Byrd. The winner of two Emmys and two Telly Awards, the film focuses on the history of the biscuit as a major part of southern culture. Famous biscuit makers will share their culinary secrets as biscuit eaters demonstrate their love for the iconic southern treat. The documentary is approximately 30 minutes long and unrated.

The museum also is organizing a biscuit-making contest featuring local restaurants to precede the film. Audience members will have the chance to sample biscuits and vote on their favorites, and Charles Doyle, associate professor in the UGA English department, will serve as the official judge. Both his selection and the audience choice will be announced following the film. Doyle studies foodways, among other genres of folklore, and he said he “…has eaten thousands of biscuits during his long life in the South.”

Kerri Russell stars as Jenna in “Waitress,” a story of a small-town woman who finds solace from her unhappy marriage in her love of baking pies. Jenna plots to leave her intolerable husband, Earl, by winning a pie-baking contest. Her plans go awry when she falls in love with the new doctor in town and finds herself pregnant. As her pregnancy progresses, a way out of her loveless marriage seems less and less clear. The winner of numerous awards, this 2007 film is rated PG-13 and runs for 108 minutes.

The 2005 comedy-drama “Junebug” stars Embeth Davidtz, Alessandro Nivola and Amy Adams. Newlyweds Madeleine (Davidtz) and George (Nivola) travel to South Carolina as Madeleine pursues a contract with an artist for her gallery and George seizes the opportunity to introduce his new wife to his family. Having only known him for a week before their marriage, Madeleine is shocked to discover how little she knows about George as his strong southern family values emerge. She befriends his high-school drop-out brother’s wife, Ashley (Adams), who believes that having a baby will solve all of her marital problems. When Ashley goes into labor and Madeleine chooses to meet with the artist instead, her commitment to family values is questioned. This R-rated film runs for 106 minutes.

Set in 1959, the classic 1982 film “Diner” features five male high school friends who struggle with the passage from youth to adulthood. Now in their 20s, the group reunites for the wedding of one of their friends. The film explores their changing relationships as they catch up in their late-night diner hangout. The American Film Institute ranked “Diner” 57th on its “100 Years, 100 Laughs” list. Written and directed by Barry Levinson, the film is rated R and runs 110 minutes.

Born in 1938, John Baeder was raised in Atlanta and is best known for his photorealist paintings and prints of mid-century diners. Baeder’s work shows his lifelong fascination with American diners and other roadside structures. The exhibition includes three major groups of his work: black-and-white photographs of Atlanta from the 1960s, photographs of handmade street signs over the course of 30 years, and photographs from the exhibition “John Baeder’s American Roadside,” organized by Thomas Paul Gallery in Los Angeles.