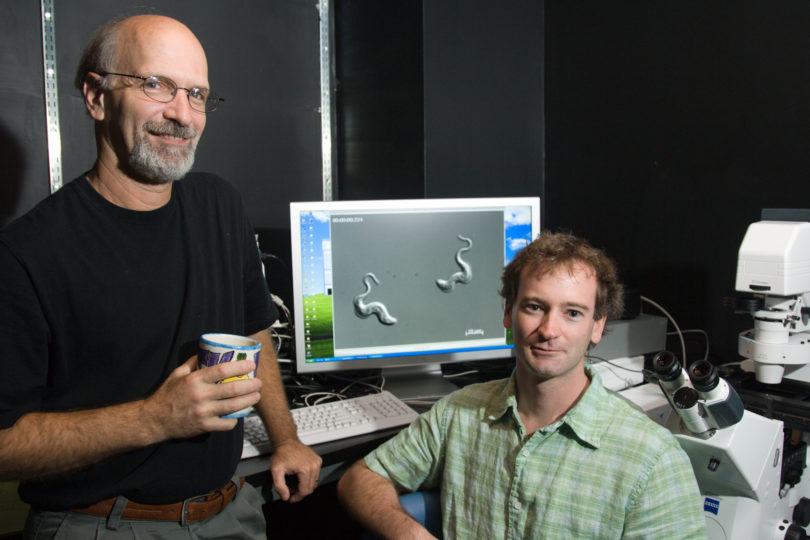 Trypanosoma is a nasty class of single-celled parasites that cause serious, even fatal diseases in humans and animals. Two species cause sleeping sickness, a disease that threatens all of sub–Saharan Africa. There’s a catch though: one parasite, Trypanosoma  brucei brucei (T. b. brucei), infects animals, but seems to spare humans, and scientists haven’t quite understood why.

Now, a team of researchers led by UGA biochemists propose that T. b. brucei actually does infect humans, but that the infection triggers release of hemoglobin from red blood cells. Hemoglobin appears to “arm” the human innate immune system by binding to a small fraction of high density lipoprotein, or “good cholesterol.” The hemoglobin-HDL complex then becomes a super toxin and clears the body of trypanosomes.

“This is a real paradigm shift in understanding what T. b. brucei does in humans,” said Stephen Hajduk, professor and head of the department of biochemistry and molecular biology at UGA. “It had always been assumed that it didn’t infect humans at all, but it now appears that it does and that the release of free hemoglobin leads to ­clearance of the infection. It was incredibly surprising to us.”

Lead author on the research is Justin Widener, a graduate student in Hajduk’s lab. The research was published in the Public Library of Science Pathogens. Widener is also a student at Brown University, where he began his work with Hajduk, who joined the UGA faculty in 2006. Other authors on the paper include April Shiflett of UGA and Marianne Jensby Nielsen and Søren Krag Moestrup of the University of Aarhus in Denmark.

Hajduk and his group are interested in a parasite that does not harm humans because they asked a simple question: why can’t T. b. brucei infect humans although it is nearly identical to the African sleeping sickness-causing parasite? After all, two cousins of T. b. brucei, known as T. b. gambiense and T. b. rhodensiense, cause, respectively, chronic and acute sleeping sickness in humans. The parasites, which are carried by the tsetse fly, have been a major health issue since the first recorded outbreak of sleeping sickness in 1906.

“We know that humans are protected against T. b. brucei by the action of a high-density lipoprotein called Trypanosome Lytic Factor,” said Widener. “We investigated the mechanism of how TLF kills the parasite by using a purification technique that allowed us to show that a protein associated with TLF strongly binds hemoglobin and that hemoglobin stimulates TLF to kill the parasite.”

Because all three strains are closely related—T. rhodensiense is different from T. b. brucei by a single gene—what is true for one species could be useful in understanding the others.

While human sleeping sickness has been an important human disease in Africa for more than a century, recent epidemics of the disease in five African nations underscore the potential threat of this disease to travelers and aid workers.

One interesting aspect of trypanosomes is their ability to infect a wide range of mammals, from humans to wild game. The severity of disease caused by T. b. brucei varies depending on the host; infections in humans are cleared while a fatal disease develops in infected cattle.

The application of the discovery by Widener on the mechanism of human protection may lead to better treatment of cattle infections by these parasites.

The value of the new research may lie as much in its potential as a model system for studying all trypanosomes as it does in specifically understanding why T. b. brucei doesn’t infect humans.