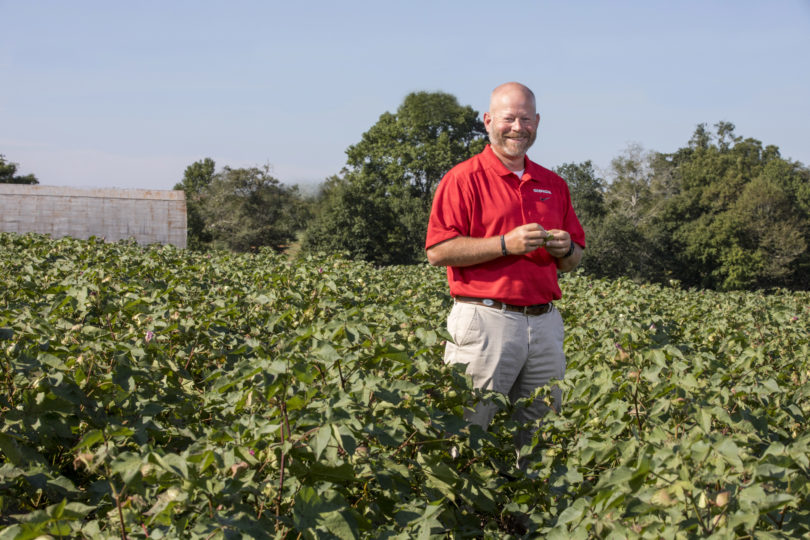 Eric Elsner is the superintendent of the J. Phil Campbell Sr. Research and Education Center, one of seven research centers in the College of Agricultural and Environmental Sciences. (Photo credit: Dorothy Kozlowski)

Yes, Eric Elsner’s office has a desk and a computer. But it also has more than 1,000 acres of land, a few hundred head of beef cattle and a tractor or two. 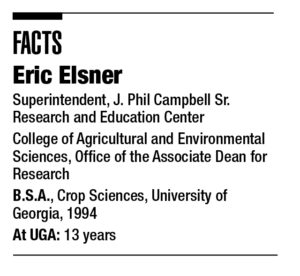 Elsner is superintendent of the J. Phil Campbell Sr. Research and Education Center in Watkinsville, one of seven research centers in the College of Agricultural and Environmental Sciences, and every day is a chance to get his hands dirty.

“I’m an agricultural person at heart,” Elsner said. “This job is  an opportunity to do what I love.”

Elsner grew up in an agricultural setting in Oconee County. His father, Earl Elsner, was a faculty member at UGA and farmed as a hobby. Following in his father’s footsteps, Elsner developed a love for farming, too, and studied crop sciences at UGA.

Elsner worked at the Campbell Center as a student in the mid-1980s, when it was a U.S. Department of Agriculture facility. Elsner’s first position at UGA was as a student worker in the soybean breeding program. After graduating from UGA, he worked in the agricultural industry for a few years before coming back to the Athens area in 2000, working at the center. By 2010, the facility was on the USDA’s closure list, so he took a position on campus with the Institute of Plant Breeding, Genetics and Genomics.

During that time, the center closed. But the legislation closing it included a provision that if a land-grant university was interested in the facility and completed the necessary requirements, the USDA would transfer the facility to the university. The transfer began in 2012, and the deed officially transferring the facility to UGA was recorded in 2013. Elsner has been with the center since then.

Each of the research and education centers at the agricultural and environmental sciences college represent different geographical areas of the state and their distinctive climates and soils. The centers are meant to build upon the research mission, the extension mission and the teaching mission of the college.

The Campbell Center’s proximity to UGA’s main campus puts it in a unique position to support the teaching mission, but its main function is to support the college’s research mission. In fact, there are 20 to 25 active projects at the center now.

The center sees a good amount of research on forages, grazing, sustainable row cropping and production of cotton and corn. Because it is predominately dry land, projects involving large-scale irrigation are out, but research on grazing and dry land row crops are ideal.

The center has been in continuous operation since 1937 and has been a staple in Oconee County, nestled along Highway 53. After Sept. 11, 2001, when stricter regulations for visiting federal facilities were put into place, the center became less accessible to local
residents.

“First and foremost, my goal is for the center to be a vital part of CAES’ mission by supporting the researchers who are striving to help farmers in the Southeast and across the U.S. and the world,” Elsner said. “It’s important to me that while doing that, we continue to be a contributing member of this community in whatever ways we can. The center is a part of this community. I hope we will be a part of the community for years to come, and I want the community to be better because of our presence.”