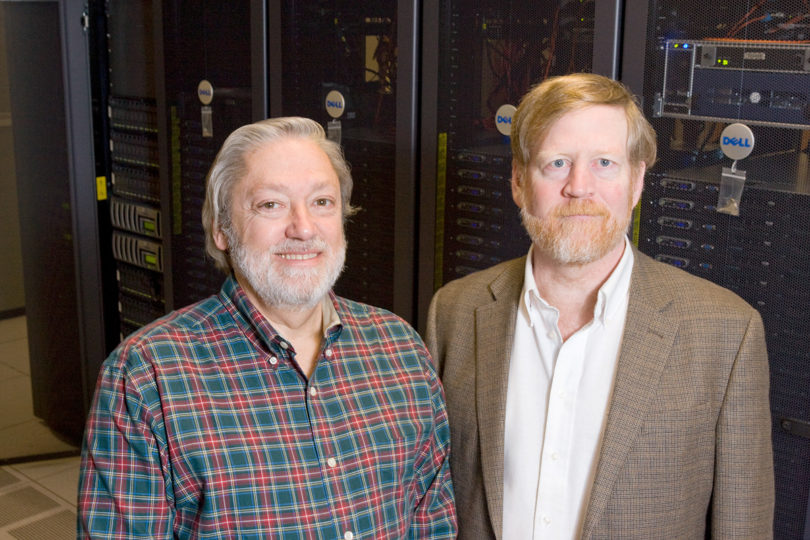 The UGA Research Computing Center can manage massive amounts of data for faculty and students, from mapping genomes to developing a digital atlas of spoken English—and more researchers across campus could benefit from this little-known resource that returns major results.

The RCC was established in the Boyd Data Center in late 2003. It is governed by the Office of the Chief Information Officer and the Office of the Vice President for Research, with a staff of six and guidance from a faculty advisory committee. Day-to-day leadership is provided by two co-directors, Matthews-Morgan (OCIO) and Jerry NeSmith (OVPR).

“We are involved in many projects at different levels of support,” said NeSmith. “For example, we played a big role in establishing the Institute of Bioinformatics cluster, and still support that system on a daily basis. On the other extreme, for some projects we primarily provide large-scale data storage.”

The heaviest users come from physics and astronomy, statistics and biochemistry, but researchers from units such as political science, business, and animal and dairy science also find the RCC useful.

“I have worked with researchers in the physical sciences, the biological sciences, accounting and education, among others,” said Shan-Ho Tsai, a scientific computing professional who provides support at the center.

Yet there is a perception that the RCC is not for everyone.

“We need to shake our image of being a South Campus resource,” said Jessica Kissinger, associate professor of genetics in the Franklin College of Arts and Sciences and chair of the Research Computing Advisory Committee. “Computers enter every facet of research now, from the arts and kinesiology to digital imagery and sound recording.”

The nine-member advisory committee, which meets monthly, helps establish policy and priorities such as determining which resources are most needed, issues of compliance with federally-mandated privacy and security rules protecting personal information and fee structures for allowable costs, Kissinger said.

“We also award grant assistance in the form of computer time (CPU hours) to help researchers when they are not currently funded by their departments or external sources,” she said.

Many researchers, such as Bill Kretzschmar, have found that mentioning the center as a resource in grant applications helps to secure funding.

“I received a very large National Endowment for the Humanities grant to do digital audio processing of historical audio tapes of American English speakers, in part on the availability of the RCC,” said Kretzschmar, an English professor who primarily used the facility for archival storage and Web services.

Support also can begin before the project receives funding.

“During the grant design and writing process,” said NeSmith, “RCC staff, in collaboration with the Office for Sponsored Programs in OVPR, can assist in estimating the level of storage, network bandwidth, software and services required to meet the objectives of the research project.”

“Groups also can organize themselves with the RCC’s help,” said Kissinger. “Members of the Institute of Bioinformatics ­submitted a coordinated major research instrumentation proposal to the National Science Foundation with assistance from OVPR and were able to obtain 10TFLOPS of computing power and significant storage—all located within and maintained by the RCC.”

Though use of the center is not free, it is far cheaper than most alternatives.

“The chief advantage is the pooling of resources among multiple researchers,” said Steve Rathbun, an associate professor of epidemiology and biostatistics in the College of Public Health. “It gives us a much bigger system than any single researcher can fund on his or her own. Without the RCC, I would have to fund my own Linux cluster. In our start-up college, this would be very difficult.”

“If I did not have access to the RCC resources, I would either have to build my own high performance computing cluster or look into buying processor time from computing centers at other universities,” said Jim Leebens-Mack, an assistant professor of plant biology in the Franklin College of Arts and Sciences.

“If the RCC didn’t exist, the budget for my grants would be much higher—at times prohibitively higher—because I would need to purchase the equipment, provide the air conditioning and power and hire a system administrator myself,” she said.

“The university community’s thirst for storage and high performance computing is growing more rapidly than any other resource need,” said NeSmith. “We are working on ways to provide that cheaply and conveniently for all researchers across campus.”