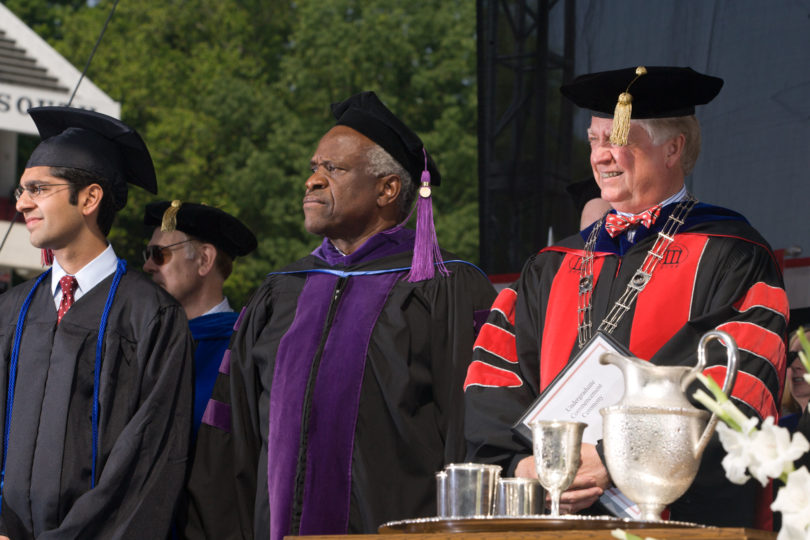 “Forty-one years ago, when I graduated from high school in Savannah, attending the University of Georgia was not an option,” he said. “Thankfully much has changed in my lifetime. Knowing what I know today, I would go to school here in a heartbeat. Georgia is home, and Georgia is where I belong.

“Monumental events involving constitutional and civil rights have made it possible for me to stand here today when I could not sit there as a college graduate years ago,” said Thomas, the fifth native Georgian to serve on the U.S. Supreme Court.

Deep Shah, the ceremony’s undergraduate speaker, shared a message similar to Thomas’. Recipient of both the Rhodes and Truman scholarships, Shah, who graduated with degrees in genetics and international affairs, spoke about the progress society has made and the privilege of education.

“So much of the world cannot dare to imagine to go through life the way we have, the way that we do and the way the we inevitably will,” he said.

“We can change the fate of those less privileged than us, if we work together,” he also said. “Well-being and providing it to others is a group task. It requires a community like that one we have been so fortunate to be a part of these four years. With so many of us dedicated to a cause, I cannot be convinced that any malady is too advanced for us to resolve.”

Approximately 3,500 undergraduates were eligible to receive degrees that Saturday.

For their post-collegiate journeys, Thomas said: “If you want to know what is down the road, ask the person who’s coming back. Today I am coming back down the dusty and difficult road of my life to meet at the commencement of your journey through the rest of your lives.”

Thomas, a speaker previously heralded by some as controversial, received a standing ovation for his remarks from a majority of the thousands of graduates and attendees in Sanford Stadium.

“You have come home,” said UGA President Michael F. Adams following the speech, referencing not only the justice’s homecoming to his native state, but to UGA.
In the graduate ceremony, held later that afternoon, an estimated 1,100 students were eligible to receive degrees.