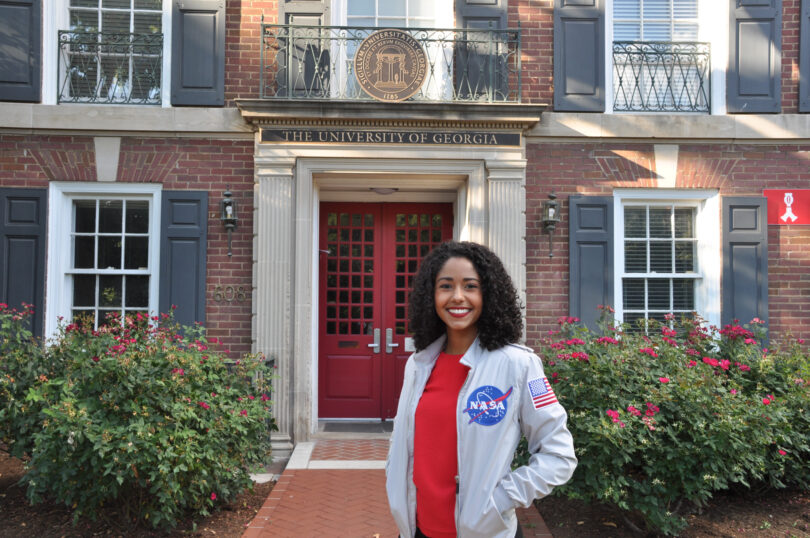 Interning and studying in Washington, D.C., catapulted a student’s dreams into reality

Tahira Allen AB ’18 never imagined she’d live in Washington, D.C., or work down the street from the National Mall. While growing up in Columbus, Georgia, her family wasn’t politically inclined, so when she decided to major in international affairs in the School of Public and International Affairs, she spent some time figuring out what she wanted to do.

A conversation with instructor Lee Lukoff PhD ’19 put everything into focus. He would be teaching at an innovative, UGA-exclusive program in Washington, D.C., the first semester of Allen’s senior year; it was a perfect fit for her, he said, and encouraged her to apply.

Allen took Lukoff’s advice, and she’s been in the nation’s capital ever since.

More than 550 students have participated in the Washington Semester Program since it began in 2008. It blends semester-long internships with classwork (often done at night since most students work during the day).

“Students in the Washington Semester Program have a distinct advantage from participating in fall and spring term internships,” says program director Don DeMaria. “In addition to working for about twice the duration of a typical summer internship with fewer interns in office, students are able to leverage their work experience and networking to establish their careers in Washington.  Each semester, it is common to have multiple students transition to full-time jobs before the end of term, and about one-third of all program alumni live in and work in DC.”

Adding to the program’s strengths was the opening of Delta Hall in 2015, a residence within walking distance of the U.S. Capitol in which up to 32 UGA students live during their semester in D.C. This impressive facility is the heart of the program and is the result of generous support from alumni in the D.C. area and across the country, and from a $5 million grant from The Delta Air Lines Foundation.

“They could not get me out of Delta Hall—I loved it so much,” Allen laughs. While the typical Delta Hall resident stays for one semester, Allen was there for her entire senior year. “Making the decision to go to Delta Hall changed my life.”

Allen, who received a scholarship to participate in the Washington Semester Program, credits her Delta Hall experience for introducing her to the friends who still make up the core of her social network and for opening doors to an impressive career in the nation’s capital.

Connections Allen made through Delta Hall helped her land an internship at Voice of America. That led to a full-time job at the VOA. After 13 months on the media resources team (where her responsibilities ranged from helping compile news pieces to interviewing members of Congress), Allen parlayed that experience to a job at NASA headquarters on Capitol Hill.

They could not get me out of Delta Hall—I loved it so much. Making the decision to go to Delta Hall changed my life.” — Tahira Allen AB ’18, Communications Strategist, NASA

Allen joined NASA in January 2019 as a social media specialist. She is the lead content creator on the agency’s Instagram page and manages its Tumblr. In September 2019, she was promoted to communications strategist, a broad title that basically means “storyteller.”

“We translate the science for a general audience,” she says. “We share NASA’s stories, but we also share the public’s stories about NASA. Not only are we trying to educate people, we are trying to inspire people. We want to inspire the next generation and give people something hopeful to think about.”

That sense of hope was on display in May during NASA’s launch of the SpaceX Demo-2. The launch was a welcome reprieve from what was a difficult spring for most Americans. Allen was the social desk host during the live broadcast of the launch and served as a conduit for the social media activity surrounding the event. Her team reached out to users, retweeted their posts, and live-shared conversations throughout the day.

While Allen’s job allows her to gaze constantly at the heavens, her eyes rarely stray too far from the University of Georgia.

Delta Hall’s alumni network is strong. Allen learned that when she was a student. Former residents turned D.C. professionals regularly reach out to UGA students to check in on their lives and offer advice or a morale boost if needed. Now an alumna herself, Allen is excited to give back.

She has served as a panelist for multiple Washington Semester Programs and is a mentor for current Delta Hall students, many of whom are balancing the same life, work, and interpersonal experiences Allen herself did just two years ago. With boundless energy and a talent for connecting with practically anyone, she is ideally suited to it.

“I love this role,” Allen says. “I’m very passionate about people. Whether it’s telling people’s stories, telling NASA’s stories, my own personal friendships, I hold people very close to my heart. Just being a friend or that person a student can come to—I love it.”