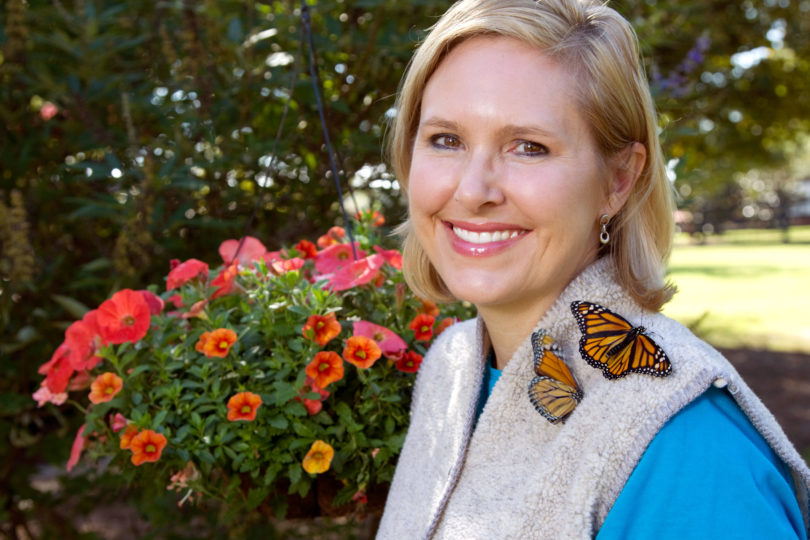 “Sonia, you’re interested in disease; can you figure out what’s killing these butterflies?”

Sonia Altizer, in her first year of graduate school, was drawn to the emerging field of disease ecology and was immediately intrigued by the request.

“I didn’t yet know what organisms I wanted to work on,” she said. “A professor who studied monarch butterflies came into my office and placed a pile of very sick butterflies on my desk.”

Altizer soon realized that nothing was known about the pathogen infecting the monarchs—and that she had found her study system.

“Here were these animals that undertake this amazing long-distance migration; it was a great way to tie together my interests in animal behavior and infectious disease processes,” she said.

Since then, Altizer, an associate professor and associate dean for academic affairs in the Odum School of Ecology, has expanded her research program to other animal-disease interactions, including studies of bacteria infecting songbirds and a global-scale analysis of diseases in wild mammals, all with the goal of understanding how animal behavior and ecology affect the spread and evolution of disease.

Her groundbreaking work has earned her both a National Science Foundation CAREER award and a Presidential Early Career Award for Science and Engineering, the highest honor bestowed by the U.S. government on scientists and engineers in the early stages of their careers.

Altizer places just as much emphasis on teaching and mentoring as on research.

“I’ve been fortunate to work with extremely gifted students in ecology,” she said.

One of her favorite classes covers the ecology and evolution of infectious diseases in human and animal populations, but she also enjoys teaching non-scientists in a course dedicated to environmental issues.

“Teaching non-science majors has changed the way I think about ecology,” she said. “I have to make the subject matter relevant and real to students with an amazing diversity of majors, tying headline issues to fundamental ecological concepts. It’s a fun class to teach.”

Altizer also goes far beyond the classroom to inspire and educate.

Project Monarch Health is a citizen-science project Altizer started in 2006 that recruits volunteers to monitor monarch butterflies—teaching them about scientific principles in the process.

“Monarchs are iconic insects that everyone recognizes,” Altizer said. “You can use them to teach people about anything from tri-national conservation of threatened species to development and metamorphosis of individual animals.”

Project Monarch Health volunteers  help Altizer monitor monarchs all over North America. “It’s given us a picture of where and when the infections are highest in the butterflies,” she said. And this data that can help inform monarch conservation efforts.

If teaching, research, and outreach weren’t enough, Altizer has also recently assumed the role of associate dean in the Odum School.

“It’s been exciting and eye opening,” she said. “I can’t imagine a place that could offer better colleagues, both within my own unit and across campus.”