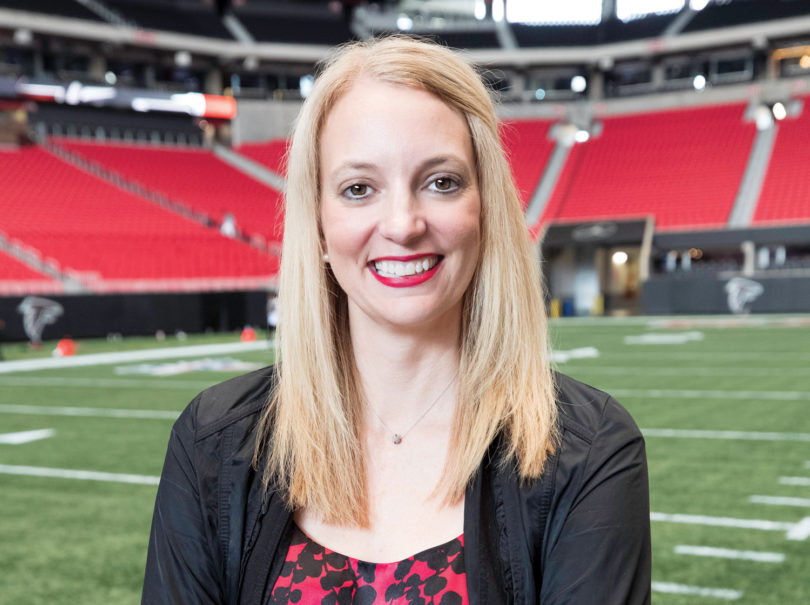 There are few moments of exhilaration quite like winning a major league championship.

While Tameka Rish wasn’t on the pitch when Atlanta United won the MLS Cup last December, she was in Mercedes-Benz Stadium as part of the front office staff that brought a major professional sports trophy back to Atlanta for the first time in two decades.

“I can’t describe the feeling of finally getting the championship. Nothing comes close to the Cup,” says Rish
MEd ’03, vice president of corporate partnerships at AMB Sports & Entertainment, the group that operates Atlanta United, the Atlanta Falcons, and Mercedes-Benz Stadium.

Rish leads a team that brings corporate partners’ brands to life in the new stadium. This architectural wonder, built around giving fans a unique experience, opened in 2017 with great fanfare. It has not disappointed, winning Sports Facility of the Year at the 2019 Sports Business Awards. Rish’s team played a key role in that success by working with corporate sponsors to build 31 engaging fan experiences throughout the stadium, including the AT&T Perch (where fans can sit on couches and watch the game from TV screens) and American Family Insurance Fan Village (where you can take selfies with a giant Falcons football helmet).

In her 15 seasons at AMB Sports & Entertainment, Rish has seen some ups and downs.

As passionate as she is about her football teams (American and otherwise), she’s found a deep commitment to another cause: human trafficking.

“I’ve always had a passion for fighting for people who don’t have a champion,” she says. Although Rish began her college career wanting to be a judge, she followed the path of journalism, which led her to sports publicity. She earned her master’s in sport management from UGA’s College of Education.

A few years ago, Rish attended an event that opened her eyes to the problem of human trafficking, and she wanted to do something about it. In 2014, she took a trip to Thailand, where she spent time in two of Bangkok’s red-light districts trying to understand the problem and helping the women and girls affected by it.

“That trip changed my life,” she says. She’s been on subsequent trips to Cambodia and the Philippines.

And when Super Bowl LIII came to Atlanta in February, Rish served on a committee tasked with raising awareness around the issue of sex trafficking. She helped host an event at Mercedes-Benz Stadium and became the marketing chair for the International Human Trafficking Institute, which launched a billboard campaign around Atlanta targeted at decreasing the demand for sex trafficking. She doesn’t think she would be able to do this kind of work had she taken a different path.

“I’ve realized I may be able to do more through a platform of sports than I could through a career in the justice system,” Rish says. “Because people are interested in the Falcons and Atlanta United, they listen and open doors for me when they wouldn’t for people with more expertise and experience in the issue.”