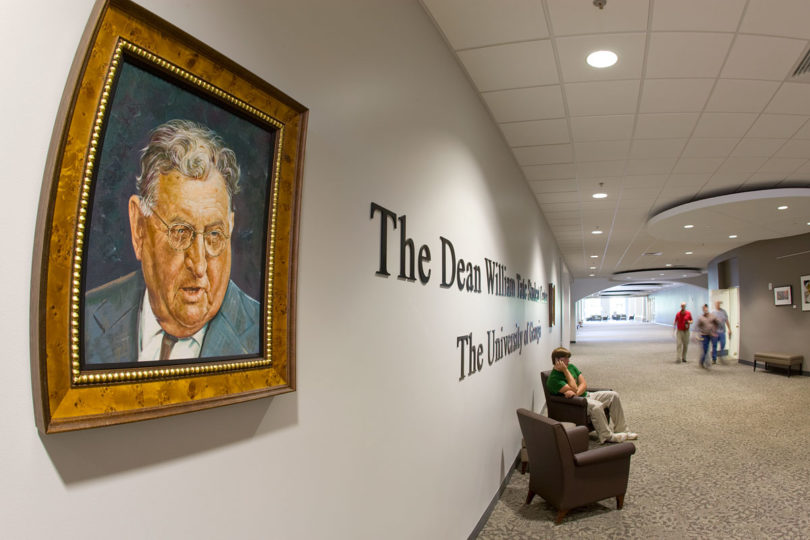 The university will officially open the Tate Student Center expansion and the Greek Park this week.

A dedication ceremony for the Tate Student Center expansion will be held Aug. 20 at 2 p.m. in the Grand Hall of the building. The dedication for the Greek Park, a new complex of fraternity houses, will take place Aug. 21 at 10 a.m.

After the ceremony, participants will move onto the west plaza facing Lumpkin Street for a ribbon-cutting ceremony led by Adams and UGA alumnus Holger Weis. As president of the University Union Student Programming Board in 1983, Weis participated in the dedication ceremony for the original Tate Student Center.

Students and other guests will be given commemorative scissors to help cut the ribbon. University Food Services will offer sample menu items from its four new restaurants: Taste of Home Café, Barberitos Southwestern Grill, Larry’s Giant Subs and Hotei’s Asian Grill. Campus Catering will serve dessert items. The UGA Pep Band will play on the plaza.

Open to the public, the dedication ceremony for Greek Park will take place at the complex, which is located on the newly-designated Greek Park Circle off River Road. The houses will be open to viewand tour.

Adams will preside at the ceremony. Bennett and Trevor Brightwell, president of the Interfraternity Council, will speak. A ribbon-cutting ceremony and reception will follow their remarks.

The Tate expansion opened on June 1 after more than four years of planning and construction. The 96,000 square-foot facility includes enhanced dining options for students, faculty and staff. Meeting and conference rooms for student organizations are available, including the 12,000 square-foot Grand Hall capable of accommodating up to 1,600 guests.

The dedication headlines a week of free events designed to welcome students back to UGA for the coming school year (see story, page 3).

Plans call for the South Lumpkin Street site, part of the university’s Northwest Precinct, to eventually become new locations for UGA’s College of Family and Consumer Sciences, Terry College of Business and other academic buildings.