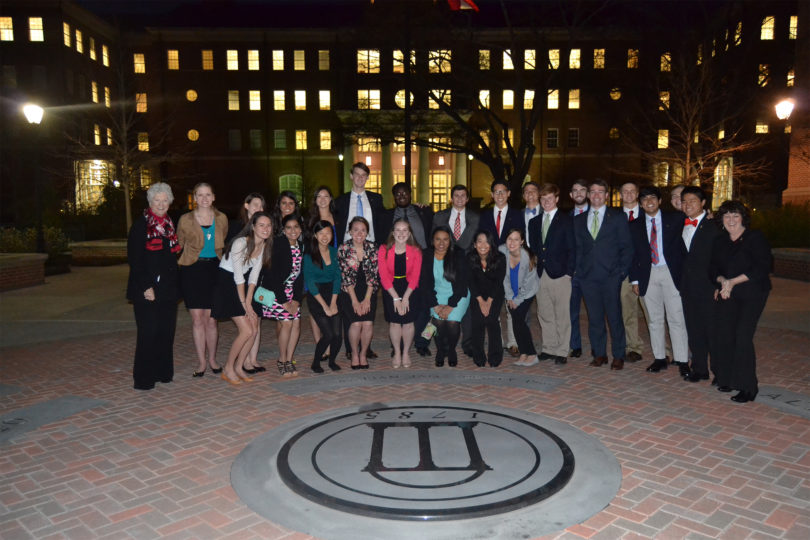 Students, their majors and hometowns are:

Additionally, three faculty members received honorary initiations for their contributions to student learning and development: Vikki Clawson, a professor in the Institute for Leadership Advancement at the Terry College of Business; Sylvia Hutchinson, a professor emerita in the Center for Teaching and Learning; and Maria Navarro, associate professor of agricultural leadership, education and communication in the College of Agricultural and Environmental Sciences.

“The Dean William Tate Honor Society 2014 initiates have majors ranging from sciences to Latin and economics and their leadership and service extends throughout many areas of campus and into the Athens community,” said Mary Martha Clark, co-president of the society. “This class is one of the highest-achieving classes academically that Tate Society has seen.”

Co-president Alex Moosariparambil said the society has high expectation for the new members.

“We are very proud of the new initiates and know that they will achieve great things and serve their communities humbly for the remainder of their time at the University of Georgia and beyond,” he said.

The society was formed in 1990 as a memorial to William Tate, UGA’s dean of men from 1946 until his retirement in 1971. The society seeks to spread Tate’s legacy by annually recognizing 12 men and 12 women of the first-year class who best exemplify the qualities he possessed.

Selection is based on academic achievement and extracurricular involvement. Tate Society members are involved in every facet of campus life, and accepted applicants are expected to continue their contributions throughout their tenure at the university.

UGA Student Affairs
The Division of Student Affairs comprises 20 campus departments that enhance the learning environment for students at the University of Georgia by stimulating the learning process, integrating the in-class and out-of-class experiences, promoting an environment conducive to growth and discovery and facilitating intellectual, spiritual, social, occupational, physical, cultural and emotional development. For more information, see http://studentaffairs.uga.edu.