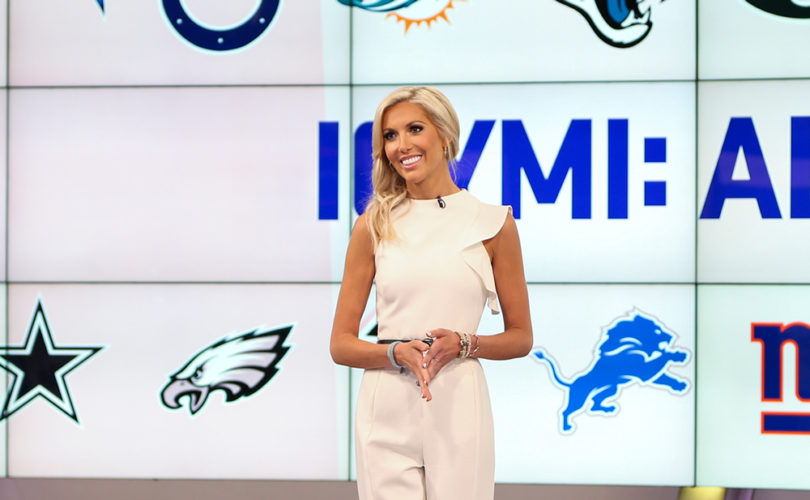 Taylor Bisciotti ABJ '15, BBA '15 is beginning her second full season as an anchor and reporter on the NFL Network. She currently hosts her own show "ICYMI: All 32," a whirlwind tour that covers each of the league's teams in a half hour's time. (Photo by Tori Richman.)

“There are times where you really question your decision about the job you’ve chosen,” she recalls. Bisciotti earned a marketing degree from the Terry College of Business and stayed an extra year to finish her degree in broadcast journalism at Grady. “You’re interviewing for full-time positions and nothing’s really happening, and you wonder if you are doing the right thing.”

Then in early 2017, she landed an interview at the NFL Network in Los Angeles. Bisciotti wasn’t sure what to expect, but the execs saw potential in the reel they’d seen and hired her. In July, she began doing news desk updates but quickly moved to field reporting. In time for the 2017 NFL season, she began hosting her own studio show, ICYMI: All 32.

“So many of the NFL’s players have great personalities and contribute so much to their communities,” Bisciotti says. “That’s what we try to show on ICYMI: All 32. We want to show the impact these players have on and off the field.” Bisciotti picks out the best content produced by the reporters for the league’s 32 teams and pulls it together in a fast-paced 30-minute package each week. That content ranges from Carolina tight end Greg Olsen inviting children who’ve survived cancer to Panther games to members of the Detroit Lions playing video games with the troops.

Throughout the year, Bisciotti continues to contribute to news updates and field reports. She experiences a difference between the two. “I find that you come off a lot more natural when you don’t have a script,” she says. “You’re able to present your information to the viewer in a much more relatable way.”

That relatability is something she sees as crucial to her job. Full episodes of ICYMI are available on YouTube, and she is a big proponent of social media communications. “You want to deal with viewers and fans personally,” she says. “They are the ones who consume your information and support and watch you. You want to be there to answer their questions.”

“Learn digital. It really is the future. You might think that’s the easier route, but I disagree. What I do at work during the day doesn’t get utilized nearly as much on broadcast, but if I put that clip on social, there is the potential for many more views.”

Bisciotti will be the first to say, though, that she is still learning on the job. She is quick to add that that’s the enjoyable part, too. “If you’re not getting a little bit nervous before you go on camera, is it worth it? The adrenaline rush is what’s fun,” she says. “Every day is a learning experience, and it’s an opportunity to grow. When you think you are at your peak, that’s probably the day to retire.”