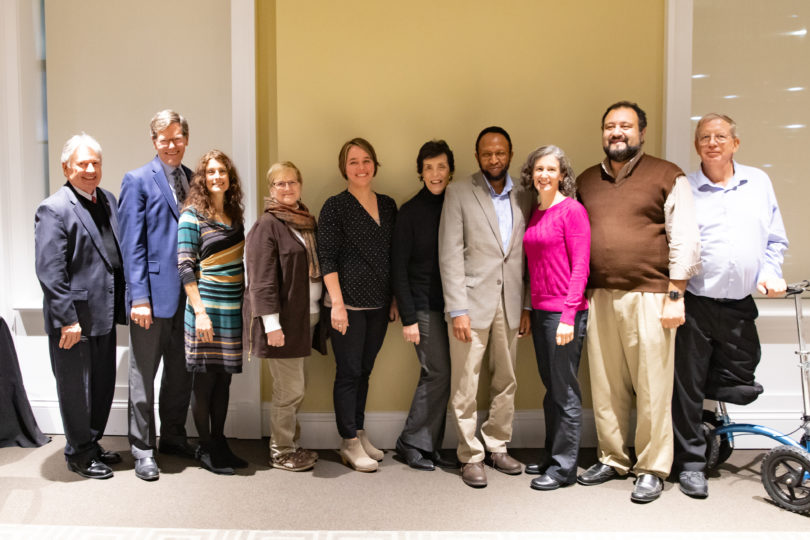 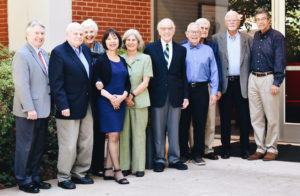 The University of Georgia Teaching Academy marked its 20th anniversary on October 27 with a luncheon union of its charter members. (Submitted photo)

Nine charter members of the University of Georgia Teaching Academy and its first inductee, Ron Simpson, professor emeritus of higher education and science education, gathered recently to commemorate the program’s 20th anniversary of engaging the larger university community to embrace the joy, passions and rewards of teaching and learning.

“[The impetus for the academy] wasn’t about one pendulum swinging between teaching and research,” said Peter J. Shedd, one of the Teaching Academy’s charter members and a professor emeritus at the Terry College of Business. “It was the recognition that there are several pendulums [for teaching, research and service] and all needed to be swinging toward excellence.”

In spring 1999, a small group of faculty met with Tom Dyer, then-vice president for instruction, to discuss a Carnegie Foundation for the Advancement of Teaching initiative to support institutional teaching academies. From this initial inquiry, an advisory committee formed, and on Oct. 27, 1999, the UGA Teaching Academy was established with 13 signatories of a preamble that remains the guiding vision of the academy’s work.

The original group intentionally had representation across the university. For members like Crim, it was especially rewarding to find kindred spirits who valued the effort needed to be better educators in addition to productive researchers.

“It was a way for us to connect the university quite literally,” he said. “We interacted with people beyond our departments and created a community that led to more interdisciplinary work.”

Libby V. Morris, the Zell B. Miller Distinguished Professor of Higher Education and director of the Institute of Higher Education,  is a 2004 inductee of the Teaching Academy. She said what the group had started in 1999 has had ripple effects throughout the university today.

Hutchinson, who is now a professor emerita of higher education, agreed.

“We could see people all over campus with an interest in teaching,” she said.

From the original 13 members, the Teaching Academy now has nearly 200 members still actively engaged throughout the university.

Under the leadership of Broder, an associate dean in the College of Agricultural and Environmental Sciences who currently chairs the Teaching Academy executive board, the Teaching Academy continues to promote excellence in teaching through workshops, symposia and assistance with the university’s instructional awards.

The Teaching Academy was instrumental in elevating the Meigs Teaching Award to bestow the title of Josiah Meigs Distinguished Teaching Professor to the recipients. It has produced books of teaching tips titled Chalk Talks, and in 2011, it expanded to develop a fellowship program for junior faculty known as the Teaching Academy Fellows.

As an instructor, Landers-Potts said it is most important to her to encourage and excite students about learning.

“I believe that a curious person—one who is genuinely interested in new ideas and new perspectives—is going to inherently be a better citizen,” she said. “I am grateful for a career in which I can be energized by people who are in such an exciting time in their development.”

More information on the membership and activities of the Teaching Academy is at http://teachingacademy.uga.edu/.