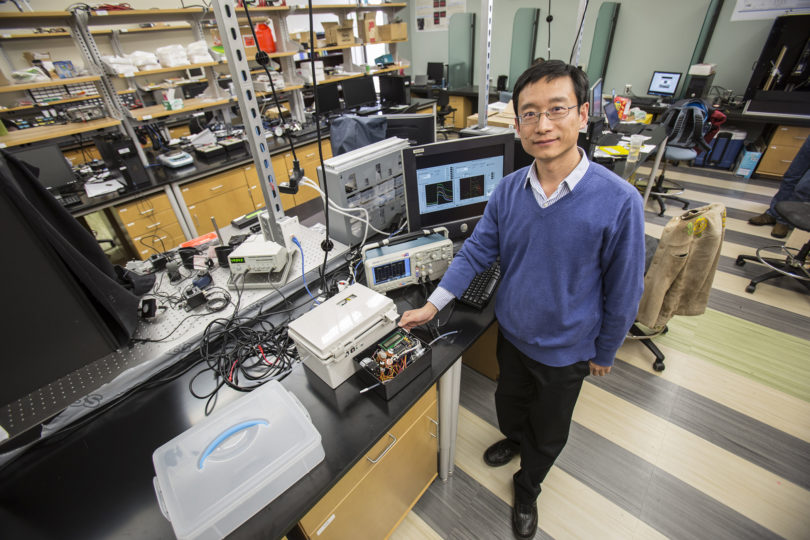 Changying "Charlie" Li of the College of Engineering stands with the device he co-developed with Glen Rains that detects gas given off by rotting onions. (Credit: Paul Efland/UGA)

Athens, Ga. – Onions, one of the biggest vegetable crops in Georgia, risk disease when they are harvested and stored. To solve this issue, University of Georgia researchers have developed new technologies, including a gas sensor and imaging methods, to detect diseases in onions.

Their study was published recently in the journal Sensors.

As part of a three-year grant, Changying “Charlie” Li, an associate professor in the College of Engineering, sought to find latent diseases in onions, ones not easily detected by the human eye. These diseases can spread to other onions in close vicinity, sometimes damaging half of the supply in storage.

“Most onions are harvested at the end of spring in Georgia,” Li said. “Some onions go to fresh markets, while others are stored for a few months. While in storage, some onions could already be infected with a postharvest disease. If it’s not caught, the disease can spread to the other onions in storage.”

Onions, which had a farm gate value of $93.1 million in Georgia in 2013, are susceptible to two major postharvest diseases, known as neck rot and sour skin, which cause crop damage and lost revenue each year. The diseases are difficult to naturally detect, so Li and his collaborators developed technologies that would monitor quality in onion storage facilities.

“Electronic noses can be a low-cost instrument for detecting smells,” Rains said. “There is precedent in using electronic noses to identify different chemicals in odors.”

Postharvest diseases cause onion degradation, rotting and a unique odor. The e-nose is able to monitor onion storage for the odor.

“We developed the sensor to detect the smells of diseased onions,” Rains said. “Using a microprocessor, the e-nose collects data and sends it to a computer. The computer then determines the results.”

“We worked with the farmers to get onion samples,” Li said. “We monitored the onions for internal quality, firmness and sweetness.”

In addition to the gas sensor, the three-year project also yielded other technologies to combat the spread of postharvest diseases.

Li’s group developed an imaging system for quick detection of sour-skin-infected onions on packing lines to potentially reduce the reliance on human inspectors. The imaging system prevents infected and low-quality onions from being packaged and sold to consumers. Another imaging system screens onions with high dry matter content, which has the practical value to the onion powder industry and annually is more than $100 million in revenue.

“Our goal is to cut economic losses and reduce labor costs for onion growers and packers, and to provide quality products to consumers,” Li said.

Now at the conclusion of their project, Li and Rains hope to continue to find ways to help the onion industry.

“The life of this project was three years, and we largely accomplished our goals,” Li said. “There’s still more work to do. We want to make the gas sensor more robust and available to growers. We want our technology to benefit growers and consumers.”

The study’s co-author is Tharun Kondaru, a former graduate student in the College of Engineering.

The study was supported by a grant from the U.S. Department of Agriculture National Institute of Food. The full article is available online at http://www.mdpi.com/1424-8220/15/1/1252.