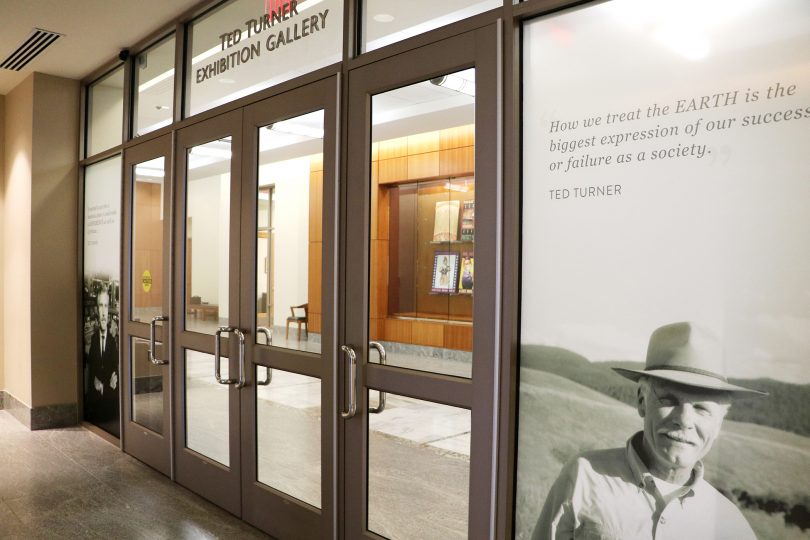 The entry space for the museum level of the UGA Special Collections Building has been named the Ted Turner Exhibition Hall and Gallery, thanks to donations from the Turner Foundation and WarnerMedia, the company that now owns a variety of Turner-created broadcast stations. (Photo by Camie Williams)

From his cowboy hat to his Lifetime Achievement Emmy Award and his World Series trophy, the life of CNN founder and environmentalist Ted Turner is on display at the University of Georgia Special Collections Libraries. 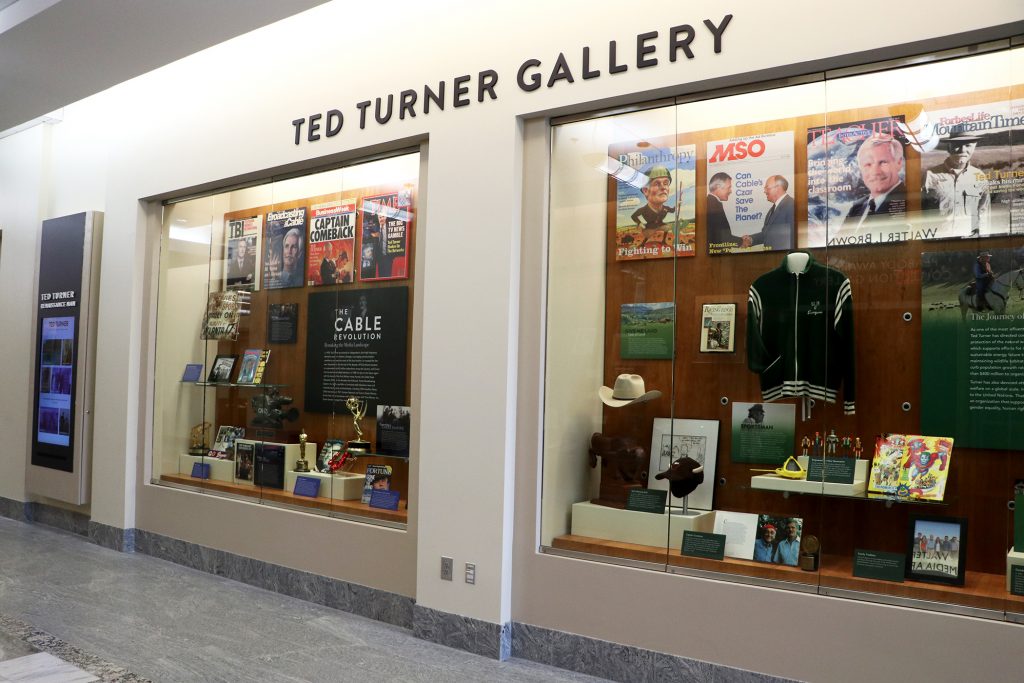 The Ted Turner Gallery at the UGA Special Collections Building showcases the life and legacy of Turner, the Atlantan who revolutionized journalism with the advent of 24-hours news broadcasts, through memorabilia, photographs and other items. (Photo by Camie Williams)

The permanent exhibit, installed this spring, is part of a tribute to the longtime Atlantan who revolutionized the television industry. Thanks to donations from the Turner Foundation and WarnerMedia, the company that now owns a variety of Turner-created broadcast stations, the entry space for the museum level of the Special Collections Building has been named the Ted Turner Exhibition Hall and Gallery. 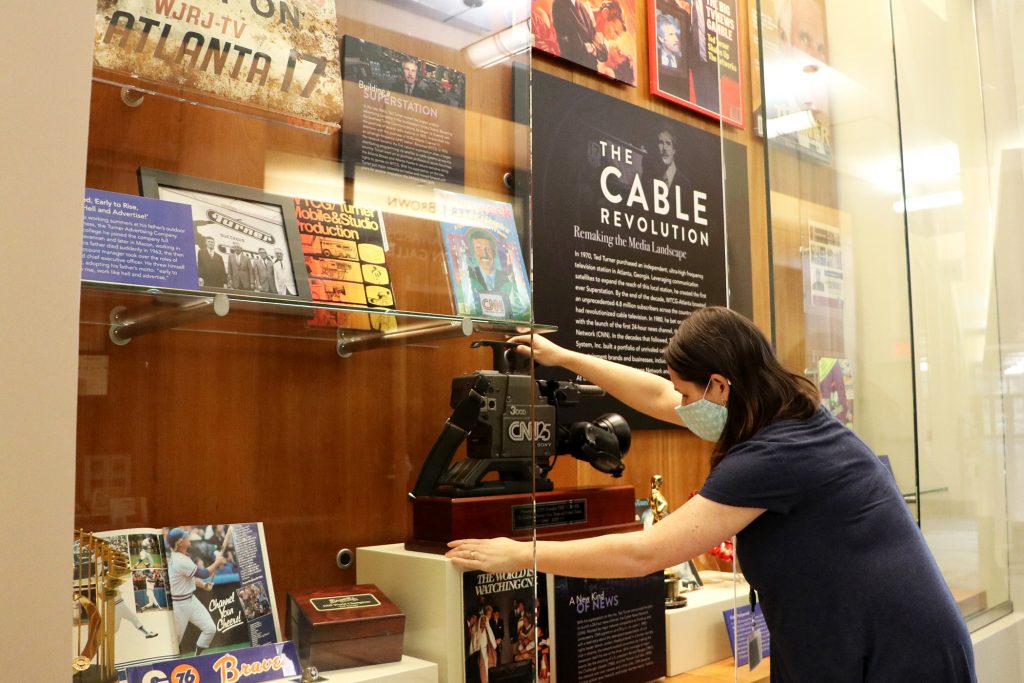 Jan Hebbard, exhibition coordinator for UGA Libraries, adjusts a commemorative CNN camera on display at the UGA Special Collections Libraries as part of an exhibit tracing the life and legacy of the network’s founder and environmentalist Ted Turner. (Photo by Camie Williams)

“Ted Turner’s influence has been felt in fields from broadcast media to ecology, and he has taken part in countless history-making moments,” said Toby Graham, university librarian and associate provost. “It is particularly appropriate that Turner’s legacy and eventually his archives will have a home as a part of the University of Georgia’s nationally significant collection on the history of American broadcasting. We look forward to showcasing these artifacts for years to come.”

The exhibit showcases Turner’s life and legacy through memorabilia, photographs and other items, such as a 1970s metal sign from the first television station that Turner purchased. WJRJ-Atlanta was later renamed to WTCG, and Turner transformed it into the first national superstation to distribute programming via satellite to cable systems throughout the country. The venture led to his launch of CNN, the first 24-hour news station that revolutionized journalism. 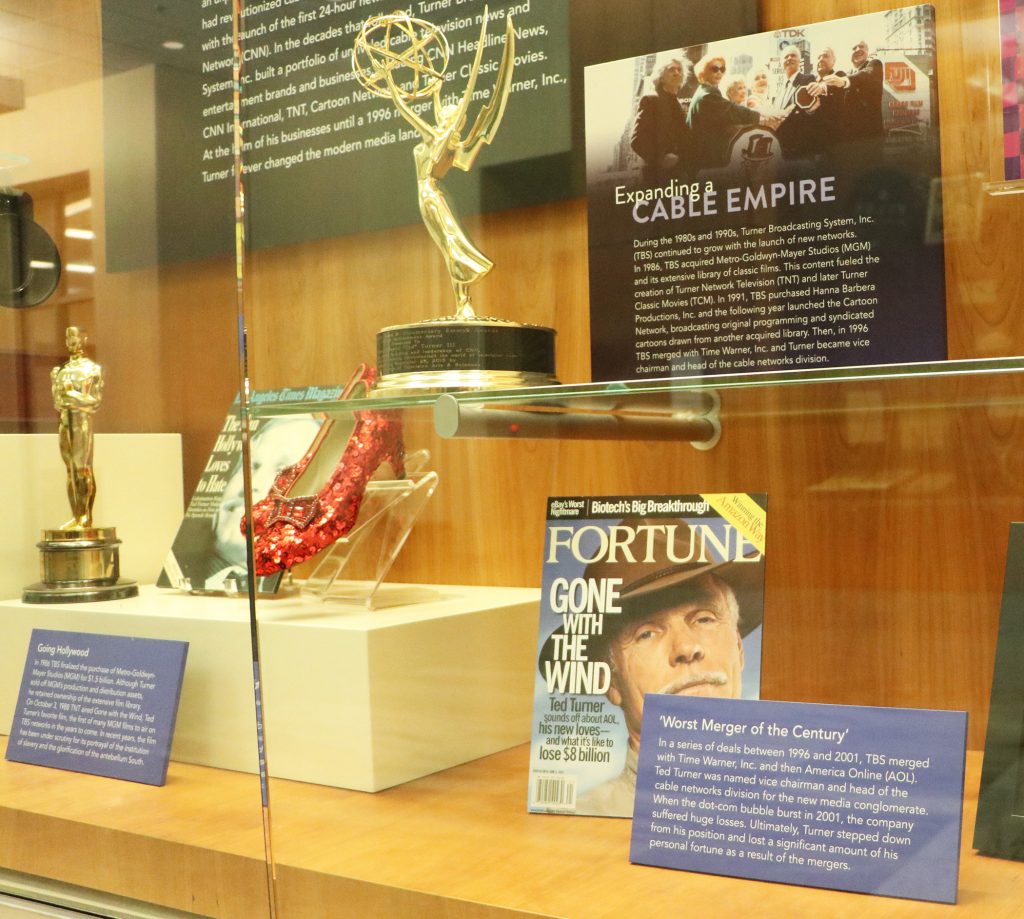 Items on display in the newly established Ted Turner Gallery at the UGA Special Collections Building trace the growth of Turner Broadcasting System, Inc. (TBS), including the 1986 acquisition of Metro-Goldwyn-Mayer Studios (MGM) and its library of classic films, which led to the creation of Turner Classic Movies (TCM). The exhibit includes Turner’s Lifetime Achievement Emmy Award. (Photo by Camie Williams)

Other highlights include the 1996 World Series ring and trophy that Turner received as the owner of the Atlanta Braves baseball franchise, and press materials and action figures documenting the cartoon Captain Planet, co-created by Turner to educate young people about the importance of environmental issues. 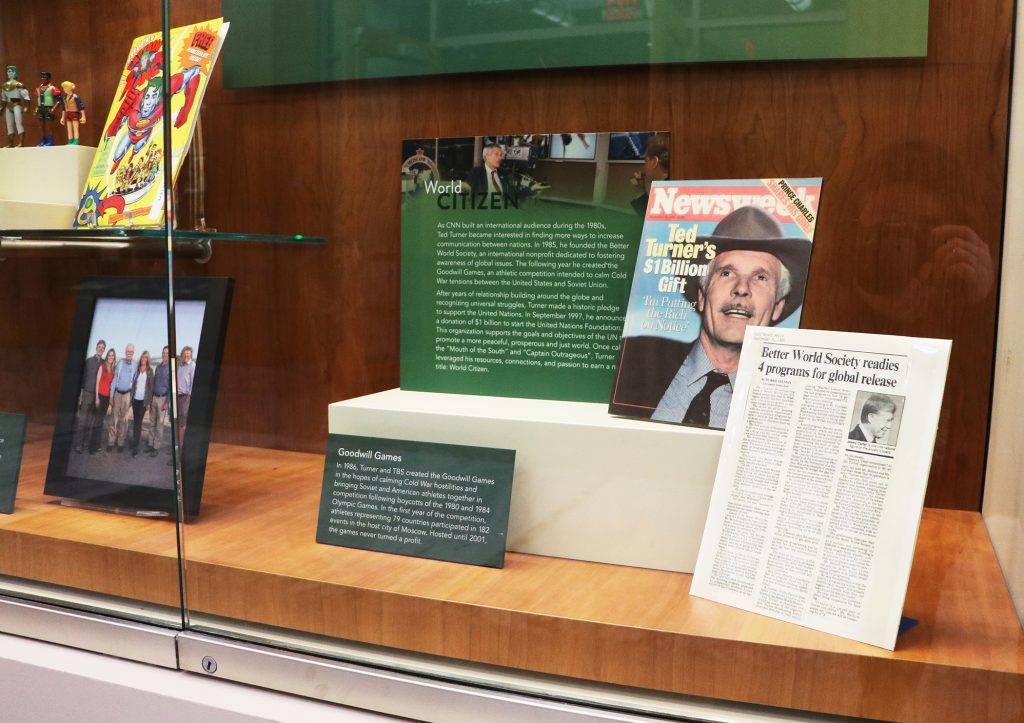 Memorabilia on display in the Ted Turner Gallery at the UGA Special Collections Building illustrate Turner’s philanthropic and humanitarian efforts, including a $1 billion pledge that established the United Nations Foundation, an organization that supports UN causes across the globe, including health, gender equality, human rights and humanitarian response. (Photo by Camie Williams)

The exhibit fills two large marquee spaces in front of the gallery dedicated to the Brown Media Archives and Peabody Awards Collection, one of three special collections units in the building and the only archives in Georgia devoted to preserving the state’s moving image heritage. In addition, an interactive kiosk next to the display cases showcases photographs, video clips and text describing Turner’s contributions to the media, entertainment and sports industries as well as his environmental and conservation activism. 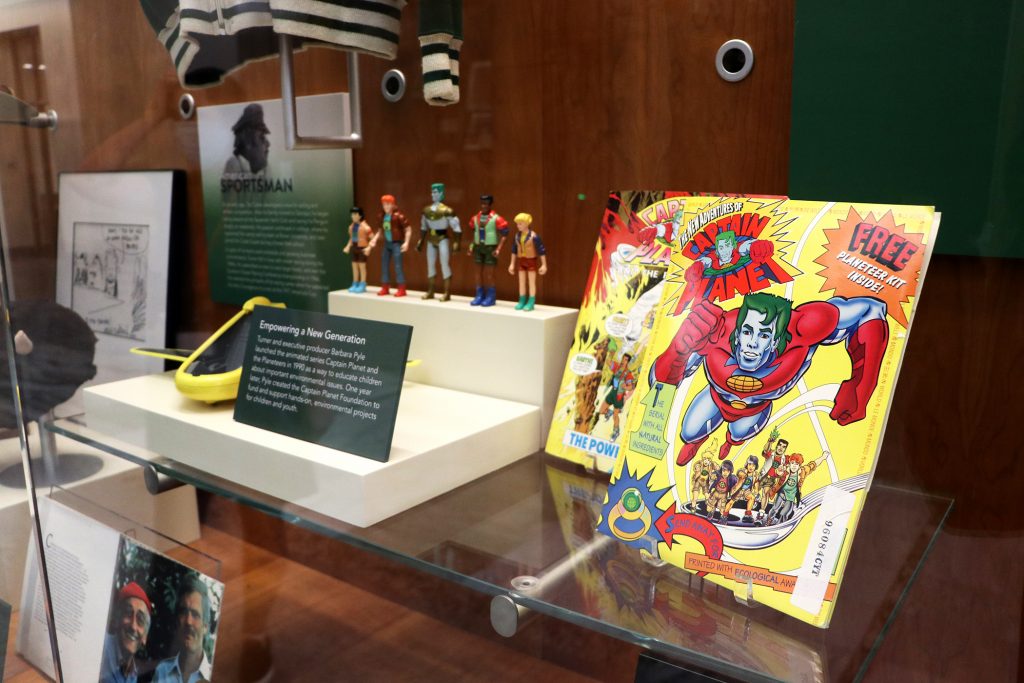 Toys and other memorabilia from the animated series Captain Planet and the Planeteers on display in the Ted Turner Gallery at the UGA Special Collections Building demonstrate how Turner merged his broadcast and philanthropic interests to educate children about important environmental issues. (Photo by Camie Williams)

The current display of items, some of which are on loan from the Turner family and the Turner Foundation, will remain on view through 2022. Future rotations in the space will continue to highlight the businessman and philanthropist and the fields that he influenced. Items from the Peabody Awards Collection and the Sidney Pike Papers complement loaned items and demonstrate how Turner’s career and interests fit into ongoing collection initiatives of the Special Collections Libraries.

Footage from the interactive kiosk is now available online.

Before arriving to UGA’s campus, visitors should check their symptoms via UGA’s Dawg Check tool. Masks are required and visitors must follow social distancing guidelines in the galleries.