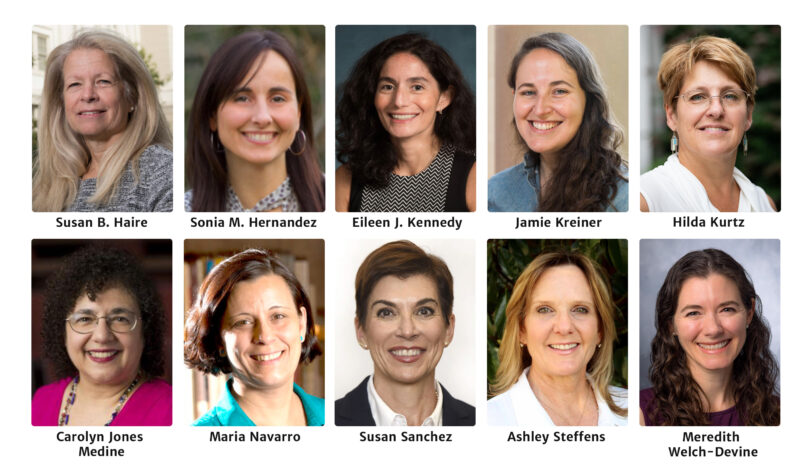 Ten University of Georgia faculty and administrators have been named to the 2021‑2022 class of the university’s Women’s Leadership Fellows Program.

The new cohort includes representatives from nine schools and colleges. Throughout the yearlong program, the participants will attend monthly meetings to learn from senior administrators on campus as well as visiting speakers from academia, business and other fields. The program, which was created in 2015 as part of the university’s Women’s Leadership Initiative, is being expanded this year to start in early fall and run through the spring semester.

“The University of Georgia is proud of the talented faculty members who comprise this year’s class of Women’s Leadership Fellows,” said S. Jack Hu, the university’s senior vice president for academic affairs and provost. “They are leaders in their respective fields and on our campus, and I look forward to the additional contributions they will make to our academic community following their experiences in this valuable program.”

Susan B. Haire, professor of political science and director of the Criminal Justice Studies Program, a joint program between the School of Public and International Affairs and the Franklin College of Arts and Sciences. Her research focuses on judicial decision making, lower federal courts and identity politics. Haire has received multiple grants from the National Science Foundation for her research on federal courts. She is the recipient of the J. Hatten Howard Award and the American Political Science Association Law and Courts Section Teaching and Mentoring Award.

Sonia M. Hernandez, professor of wildlife disease, with a joint appointment in the Warnell School of Forestry and Natural Resources and the College of Veterinary Medicine. She is also the graduate coordinator for UGA’s Center for Integrative Conservation Research Ph.D. Program. Hernandez’s research examines how anthropogenic activities impact wildlife ecology and health, as well as how resource provisioning by humans impacts the ecology and health of various species. Her honors include the Richard B. Russell Award for Excellence in Undergraduate Teaching.

Eileen J. Kennedy, Dr. Samuel C. Benedict Professor and interim associate department head of the department of pharmaceutical and biomedical sciences in the College of Pharmacy. Her research focuses on the development of inhibitors of protein-protein interactions for critical targets that are involved in the regulation of cellular processes, with the goal of discovering new therapeutics for cancer and other diseases. Kennedy is a Fellow of the American Heart Association and of the American Cancer Society. She serves as a council member and international liaison for the American Peptide Society and as a committee advisor for the Federation of American Societies for Experimental Biology.

Jamie Kreiner, professor and head of the department of history in the Franklin College of Arts and Sciences. Her research focuses on the mechanics of culture and narrative, cognition, the interplay between science and religion, and animals. Kreiner has received awards from the Medieval Academy of America, the American Society for Environmental History, the Society for French Historical Studies, the Agricultural History Society and the Whiting Foundation. She is also a recipient of UGA’s Michael F. Adams Early Career Scholar Award.

Hilda Kurtz, professor and head of the department of geography in the Franklin College of Arts and Sciences. Her research focuses on the geographic dimensions of political practice, with attention to how groups of activists draw on a geographical imagination to strategize for social change. Kurtz is a recipient of the American Association of Geographers Susan Hardwick Excellence in Mentoring Award, the Southeastern Division of the Association of American Geographers Service Award and the Franklin College of Arts and Sciences Excellence in Diversity Leadership Award.

Carolyn Jones Medine, professor of religion and director of the Institute for African American Studies in the Franklin College of Arts and Sciences. Her research focuses on Southern American literature and religion, with an emphasis on women’s literature and theories of religion, as well as postmodern and postcolonial theory. Medine is a recipient of both the Sandy Beaver Teaching Professorship and Excellence in Teaching Award from the Franklin College, as well as the American Academy of Religion Excellence in Teaching Award and was a Center for Teaching and Learning Senior Teaching Fellow.

Maria Navarro, professor of agricultural leadership, education and communication in the College of Agricultural and Environmental Sciences and former associate director of the Morehead Honors College and the Center for Undergraduate Research Opportunities. She has worked in international development and agricultural education in the U.S., Europe, Latin America, Africa, the Middle East and Western Asia. Navarro is a recipient of the D.W. Brooks Faculty Award for Excellence in Teaching and the D.W. Brooks Diversity Award, the President’s Fulfilling the Dream Award and the Richard B. Russell Award for Excellence in Undergraduate Teaching.

Susan Sanchez, professor of infectious diseases in the College of Veterinary Medicine, director of One Health, and assistant director of the Biomedical and Translational Sciences Institute. She leads the Microbiology and Molecular Diagnostic Laboratory of the Athens Veterinary Diagnostic Laboratory. Her research is focused on providing diagnostic tests, exploring emerging clinical problems, and understanding the development and spread of antibiotic resistance. Sanchez is a Royal Society of Biology Fellow and serves on the NIH Council of Councils. She is the recipient of the Charles Dobbins Award for excellence in service for leading the operationalization of UGA’s CLIA-certified COVID-19 testing laboratory as its technical director.

Meredith Welch-Devine, assistant dean in the Graduate School and adjunct professor of anthropology in the Franklin College of Arts and Sciences. Welch-Devine’s research focuses on climate change adaptation, impacts of sea level rise and extreme weather events on coastal populations, collective management of common-pool resources, and policy and practice related to conservation and sustainability. She is the recipient of several grants from the U.S. Army Corps of Engineers, the National Science Foundation and the Andrew W. Mellon Foundation.

“The Women’s Leadership Fellows program gives participants a deeper understanding of the challenges and opportunities facing institutions of higher education,” said President Jere W. Morehead. “By recognizing and promoting excellence, it plays an important role in advancing the university’s missions.”

The Women’s Leadership Fellows were chosen from nominations from deans and other senior administrators as well as from self-nominations. The program is administered by Meg Amstutz, associate provost for academic programs and chief of staff in the Office of the Senior Vice President for Academic Affairs and Provost.