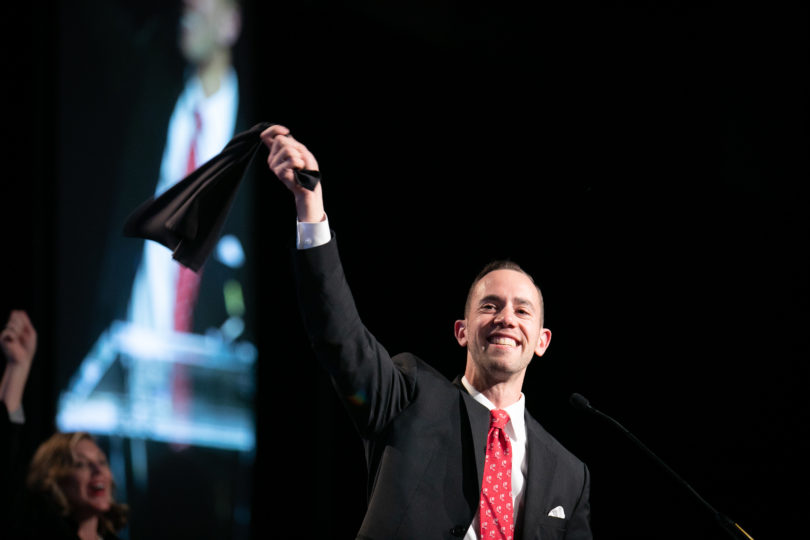 The University of Georgia Alumni Association recognized the fastest-growing companies owned or operated by UGA alumni during the 10th annual Bulldog 100 Celebration on Jan. 26 at the Hyatt Regency in Atlanta.

The 2019 fastest-growing business is Terminus, led by CEO Eric Spett, who earned his bachelor’s degree in business administration in 2010. Terminus is a business-to-business advertising platform that empowers marketers to achieve the highest return on investment on their digital advertising investment. The platform contains a comprehensive suite of advertising tools that makes it simple to launch, manage and measure ad campaigns that result in more revenue for their clients.

“I’m so proud to be recognized alongside all these great businesses,” said Spett. “My entrepreneurial journey started in earnest at UGA. Being honored nine years later as the fastest-growing Bulldog business is a huge honor.”

“On Saturday, we celebrated a decade of recognizing more than 650 business leaders and the economic impact their businesses have had on our state and country. The Bulldog 100 program continues to show both the power of small business as an economic driver as well as the amazing accomplishments of UGA alumni,” said Meredith Gurley Johnson, executive director of the UGA Alumni Association. “We are proud to celebrate their achievements.”

The Atlanta office of Warren Averett CPAs and Advisors partnered with the UGA Alumni Association to review nominated businesses’ financial records to determine the ranked list. Nominations were accepted between February and May 2019. Approximately 500 nominations were received for the 2019 Bulldog 100. Each organization must have been in business since 2013, experienced revenues in excess of $100,000 for the calendar year 2014, and be owned or operated by a former UGA student who owns at least 50 percent of the company or is the CEO, president or managing partner.

This year’s keynote speaker was Alan Masarek, CEO of Vonage and a 1982 graduate of UGA. Masarek is an innovator with deep experience in mobile, SMB and enterprise sectors, serving most recently as Google’s director of Chrome and apps. Masarek also co-founded Quickoffice Inc., a two-time Bulldog 100 business, and served as its CEO from 2007 until 2012.

During the event, the UGA Alumni Association also presented the second annual Michael J. Bryan Award to 1983 graduate Ron Holt, CEO and founder of Two Maids and A Mop, in Birmingham, Alabama.

Bryan, the co-founder and managing partner of Vino Venue and Atlanta Wine School in Dunwoody, Georgia, passed away in 2017 after a long battle with cancer. The award recognizes a returning Bulldog 100 honoree whose business has not only sustained growth, but also demonstrates entrepreneurial spirit and commitment to UGA that was a hallmark of Bryan.

For more information about the Michael J. Bryan Scholarship or to view the complete list of 2019 Bulldog 100 businesses, visit www.alumni.uga.edu/b100.