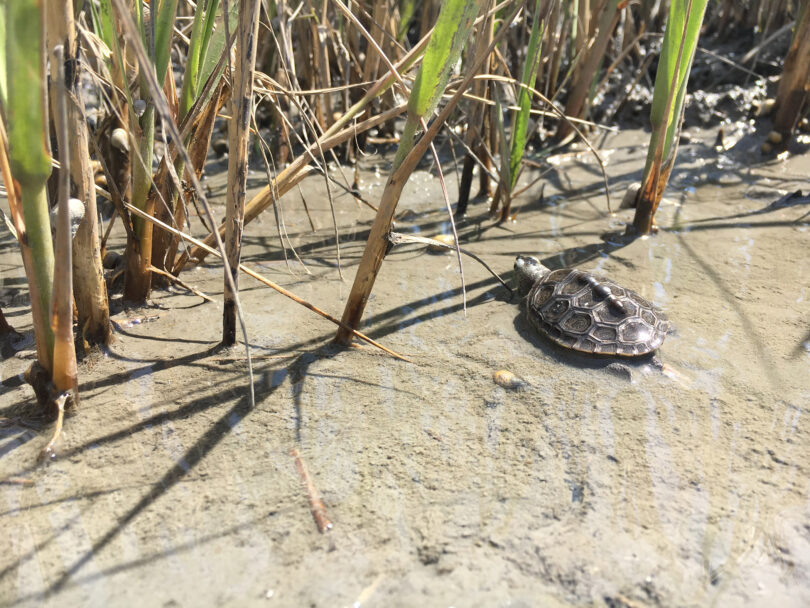 Adult terrapin turtles have a superpower: Unlike most land-dwelling animals, they prefer the slightly salty water found in marshes up and down the East Coast.

But while adults can survive in a variety of salinity levels, little is known about hatchlings, which are born from nests laid on land above the tide. If salt water inundates a nest, the turtles die. Recently hatched terrapins don’t show the tolerance to salt water that adults do. So how do these little turtles manage in salty marshes? 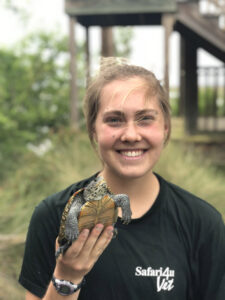 John Maerz, professor of wildlife at the UGA Warnell School of Forestry and Natural Resources who mentored the undergraduate-led research project, said this knowledge of juvenile terrapin behavior helps understand how the species persists in high-salt areas of marshes. It also illustrates the potential negative effects of sea-level rise and droughts on terrapins and the importance of managing for freshwater sources for terrapin populations.

“We don’t know much about the upland habitats of these tiny turtles, but little pockets of areas that get freshwater from time to time are going to be important habitats. These turtles show the capacity to learn where they have access to these little pockets of water—even if it’s ephemeral. They learn where these things are if they encounter them,” said Maerz. “But there’s a limit. If human activities push salinity levels up, those juvenile behaviors can’t fully compensate for the stress of those high-salinity levels. After a while, juvenile terrapins just stop feeding and they become fixated on finding water.”

The primary goal of the study was to understand physiological and behavioral responses of recently hatched terrapins to salinity levels. Researchers found too much salinity creates stress, which in turn causes young turtles to eat less and grow slower. This has the potential to cause higher mortality in the wild. 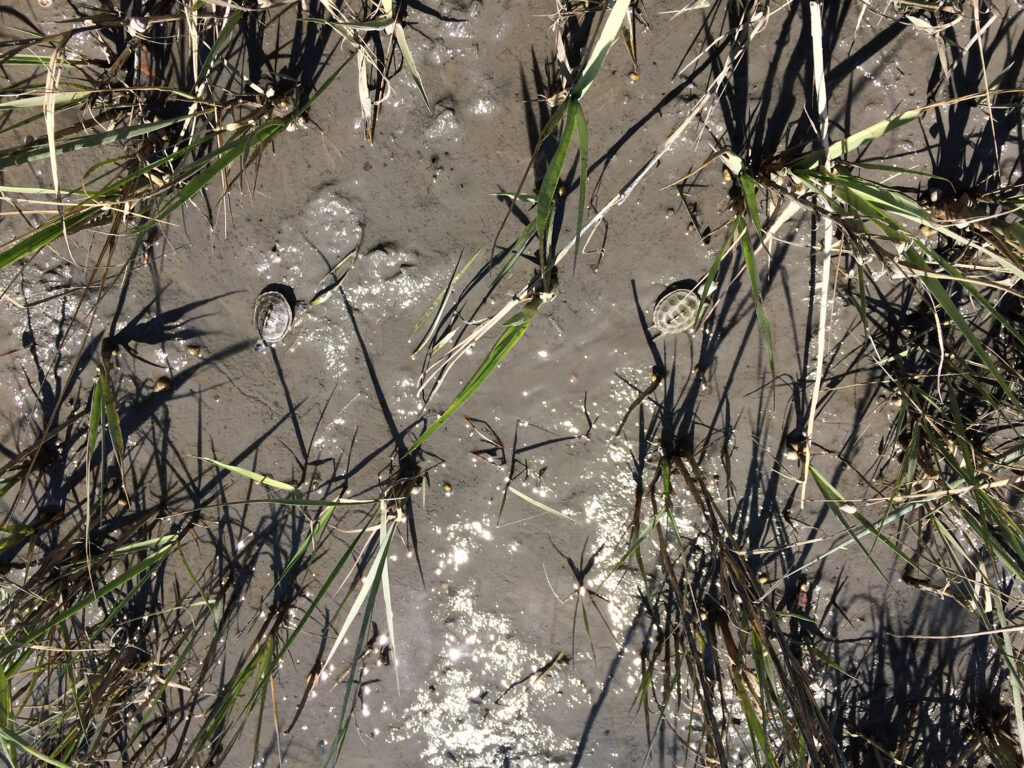 Juvenile terrapins in the pluff mud as the research team collected them for their study. All the terrapins collected were safely returned to their habitat. (Photo courtesy Lizzy Ashley)

Then, the team began to notice something unexpected: The stressed turtles would go to the empty pools where they’d previously been provided freshwater. They had learned where to find the freshwater source—even though it was dry—and opted to wait there for more freshwater rather than return to the salty solution.

“It was really interesting to watch the way the turtles in different salinities behaved,” said Lauren Head, one of the undergraduate students who contributed to the project. “Because we started to notice the ones in higher salinities were spending more time out of the water and were eating less and growing at a slower rate. There was a noticeable size difference between the turtles, and it was obvious which ones were in the higher salinity because they were hanging out in those kiddie pools.”

Elizabeth Ashley, an undergraduate Honors student who launched the project under the guidance of Maerz, recalled being able to watch the turtles gulping freshwater once it was added. 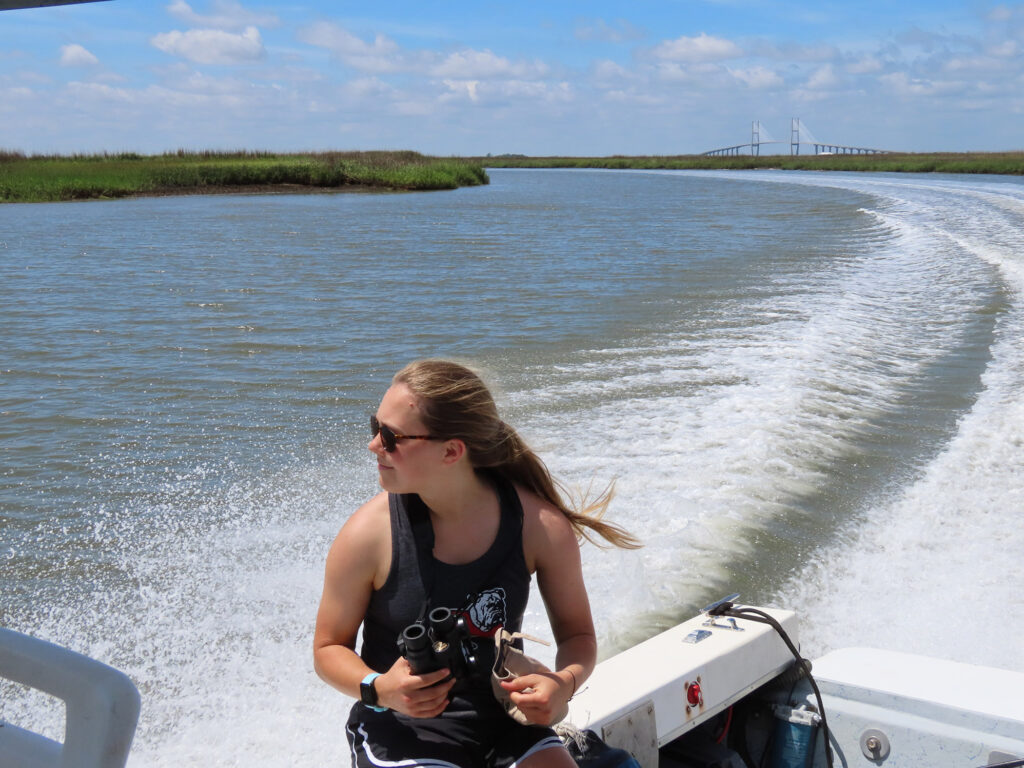 “When we would fill the water dishes they would go up and dunk their heads in and you could see them physically drinking—that was kind of crazy,” she said. “We ended up truncating the experiment a little bit—we intended it to last around 90 days, but we decided to prioritize terrapin well-being and stop on day 75.”

At that point, with behavior and growth documented, all the turtles received an extended “spa treatment” of shrimp, turtle food pellets and ideal water conditions. The turtles that had been stressed and showed slower growth were allowed to recover and catch up to the others before all were released back to Skidaway Island, where they had been collected as part of an ongoing turtle conservation project.

Terrapins can be found in marshy areas along the East Coast between Florida and Cape Cod, but not consistently. “Terrapins are present or abundant everywhere. We’re trying to figure out what part of that pattern is natural and what part is related to human activities,” Maerz added. “We’ve worked on how human activities affect adult terrapins. This was our first chance to dive into a factor that may be affecting the youngsters.” 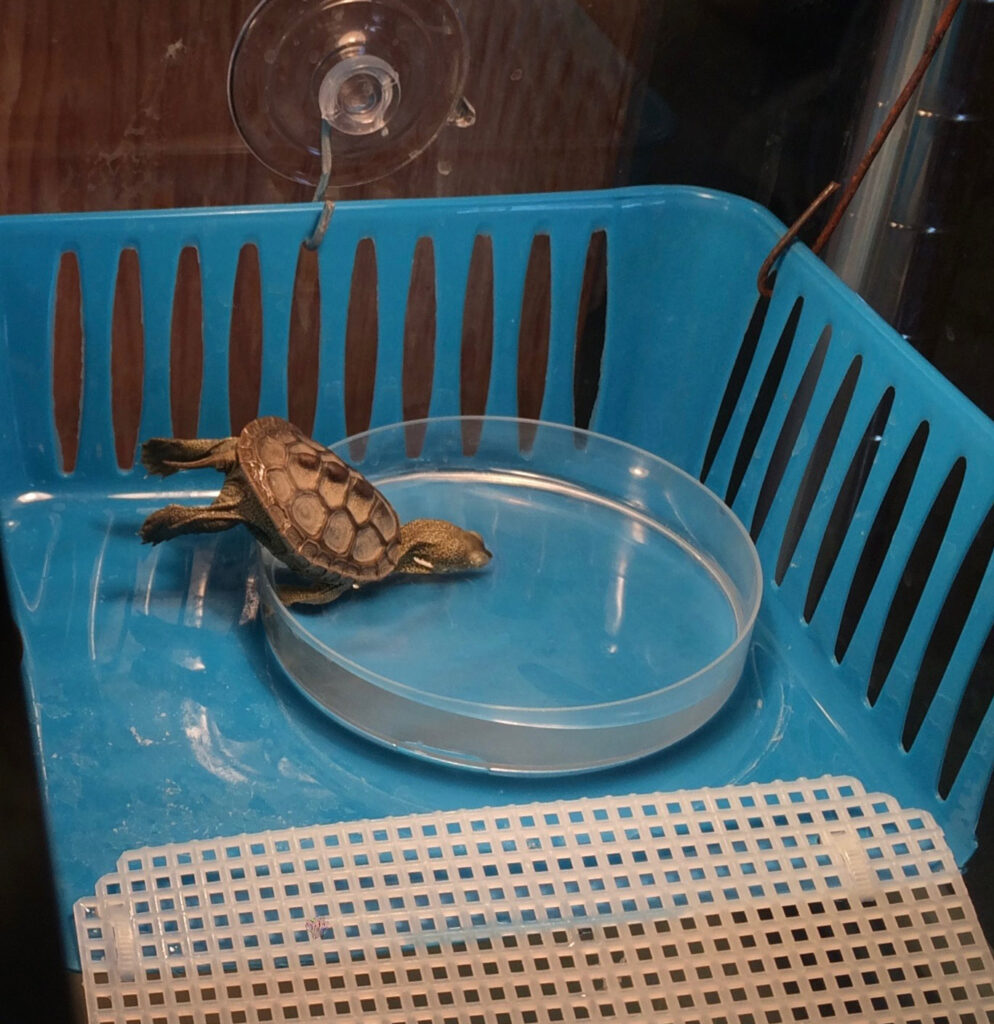 A juvenile terrapin drinks from a dish of freshwater as part of a study on the turtles’ salinity tolerance. (Photo courtesy Lizzy Ashley)

Ashley is now pursuing her Doctor of Veterinary Medicine at the University of California-Davis. She was the lead author on the study, which started as her Honors thesis. The study was supported by a fellowship from UGA’s Center for Undergraduate Research Opportunities.

“I was interested in the project because I was thinking about hydrologic land use changes around marshes, and how climate change will affect the composition of the habitats that terrapins use,” said Ashley. “So, knowing that they can use ephemeral water sources—pools of rain or areas where there’s more river inundation—was kind of a relief. We can identify important water sources for terrapins, in addition to safe places for them to nest, and to find the perfect formula for terrapin persistence in a changing world.”