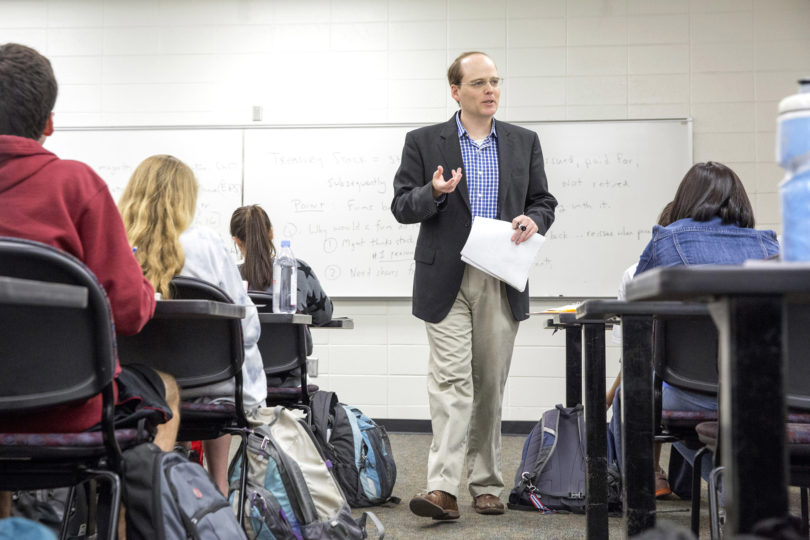 There’s a stereotype of the introverted, dull accountant.

Then there’s John Campbell, associate professor of accounting in the Terry College of Business. The two couldn’t be more different—and he has the data to prove it.

“In my senior year of college, I had to take a personality test for my management class. My Myers-Briggs type was ENFP (extroverted, intuition, feeling, perception), which I quickly saw was the exact opposite of an accountant on all four dimensions,” Campbell said. “But I was an accounting major. So I thought, how can I combine this knowledge of accounting with a career path that might be more suitable? And the personality tests were suggesting that a teaching career was the best fit for me.”

The data bears that out.

Campbell has received the Outstanding Undergraduate Teacher of the Year award in his department for four straight years. Since starting at the Terry College in 2010, he has received numerous research and teaching awards, including the university-wide Lilly Fellows Teaching Award, a program for 10 junior professors across the university who show promise in research and teaching.

There’s no denying that his energetic approach resonates with students. It might be a product of his unique worldview, which sees human connections as the common denominator in both accounting and teaching.

“I look at accounting—and the capital markets more broadly—as connecting people in the world who have money (i.e., investors) with people who need money (i.e., entrepreneurs), all through the provision of financial statements,” Campbell said. “The common language they share is accounting.

“If students really understand how financial statements are put together—all their strengths and all their limitations—they become so valuable that they can literally pick where they want to live and who they want to work for,” he also said.

Every new concept that’s covered in Campbell’s classes is explained in the same manner, using a pedagogical technique he learned from former accounting professor and mentor Dan Smith.

“No matter the topic, Smith taught it the same way: (1) A definition of the transaction we’re talking about, (2) the economic intuition and incentives behind the transaction, and (3) the potential problems these incentives might create if we let firms present the information however thy want,” Campbell said. “Once you understand those three things, more times than not, the accounting rules will fall out. You’re not memorizing rules. You understand why it is set up the way it is.”

Understanding the material, Campbell said, is only half of the equation. Students also need motivation to work hard so they can make a difference in the world.

“My PhD advisor at the University of Arizona, Dan Dhaliwal, said that a good professor does two things: (1) You push your students as hard as they’re capable of being pushed, not how hard they want to be pushed. (2) Then, after you push them, and they do their best, you tell them how good they are, because they need to hear it. It’s a very empowering message and I say it to my students each semester,” Campbell said. “For our students, the biggest thing they need is for someone to convince them how good they can be, and then get out of the way.”

Before joining academia, Campbell was an auditor with PricewaterhouseCoopers, a financial reporting manager for Remington Arms, and a mergers and acquisitions analyst for Wachovia’s investment banking division. These practical experiences have helped Campbell in two ways. First, they help him better understand the working world his students face. Because accounting students are in such high demand, Campbell often provides his students with advice on finding that first job.

“Students put a lot of pressure on themselves to get that first job right,” he said. “I tell them, your career is 30-40 years. Start with whatever it is that you think suits you best. Along the way, other opportunities will come up. Follow the ones that seem right, ignore the ones that don’t. Eventually, your career of ‘mini-decisions’ puts you exactly where you’re supposed to be. That’s what happened to me.”

Second, Campbell’s time in the private sector informs his research at UGA, where he tackles questions that he believes have an impact on the accounting profession at large (rather than just academia). He investigates an unusually broad range of issues—derivatives and pensions, executive compensation, voluntary disclosure—all of which arose from questions he faced in the field.

“Almost every one of my research papers comes from my time in professional practice when I’d think, ‘Gee, I wonder if anyone cares about this?’ ” he said. “I’m interested in accounting for very complex transactions, whether investors understand those transactions, and when they incorporate the accounting information related to these transactions into stock prices.”

“I used to think that teaching and research were different, but now I don’t think they are,” he also said. “The goal of both research and teaching is for the instructor (or researcher) and student (or reader) to help each other better understand how the world around us works. Both involve developing relationships with others, listening and learning together.”