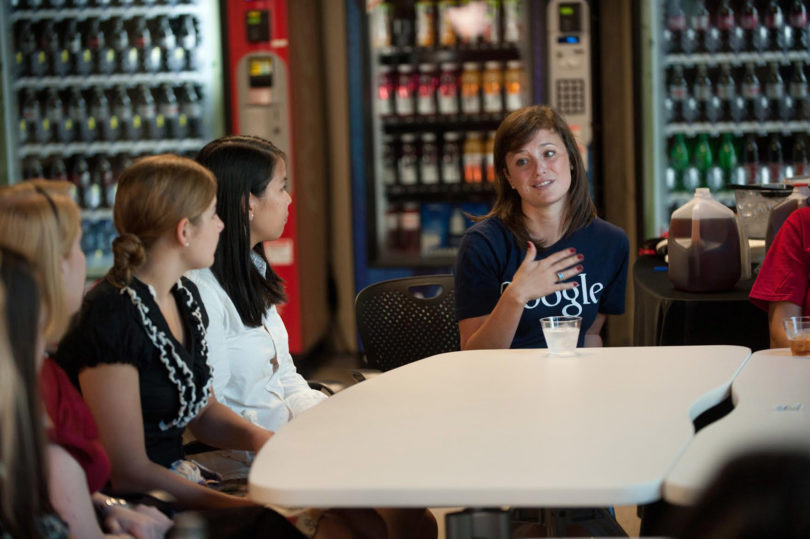 Athens, Ga. – The University of Georgia Terry College of Business has launched the Terry Women’s Initiative, a program committed to the recruitment, retention and advancement of students that aims to inspire confidence and advance students’ academic and professional goals.

Funded by a donation from Terry College alumna Betsy Camp, the Terry Women’s Initiative is open to all UGA students regardless of gender or major. By providing an array of resources and experiences, the program supports students throughout their college careers, from helping them choose and prepare for the right major to providing valuable insights on classroom engagement, the job search and more.

“The inspiration behind the Terry Women’s Initiative came from a 2014 Atlantic Monthly article entitled ‘The Confidence Gap,’ which documents the fact that success in work and life is as much a function of confidence as of competence,” said Betsy Camp, who serves as president and CEO at DF Management Inc. “According to research, confidence comes from the lessons learned taking risks and leaning into opportunities as they present themselves. It is the mission of the initiative to be a resource so that every Terry woman has the confidence, as well as the competence, to reach her full potential.”

The program relies on the involvement of Terry students, alumni, faculty, staff and recruiters, who assist students in picking out their best-fit major, building classroom confidence, finding internships and succeeding academically.

“The ultimate goal of the Terry College of Business is to nurture well-rounded, successful students who can positively contribute to our state and nation,” said Benjamin C. Ayers, dean of the Terry College. “The creative and supportive programing of the Terry Women’s Initiative helps to further prepare our students to be the absolute best they can be. I am extremely grateful to Betsy Camp for creating and funding this dynamic and ambitious program.”

Through the initiative, students can attend roundtable discussions with successful businesswomen, join book clubs, attend lectures, connect with alumni and employers and more. Interested students can also join the program’s Listserv to learn about upcoming events and opportunities.

Senior Vice President for Academic Affairs and Provost Pamela Whitten noted that the Terry Women’s Initiative aligns with the campus-wide Women’s Leadership Initiative that she and President Jere W. Morehead launched last year. The campus-wide initiative has addressed issues such as recruitment and hiring, created the Women’s Leadership Fellows Program for faculty and sponsored events such as a summit on women in agriculture that drew participants from 13 states to campus.

“The fact that many of the University of Georgia’s schools and colleges have made leadership development a priority bodes well for the future of our state and nation,” Whitten said. “Betsy Camp’s support of the Terry Women’s Leadership adds to the university’s momentum and will have a transformative impact on tomorrow’s leaders.”

For more information about the Terry Women’s Initiative, visit http://www.terry.uga.edu/womens-initiative.