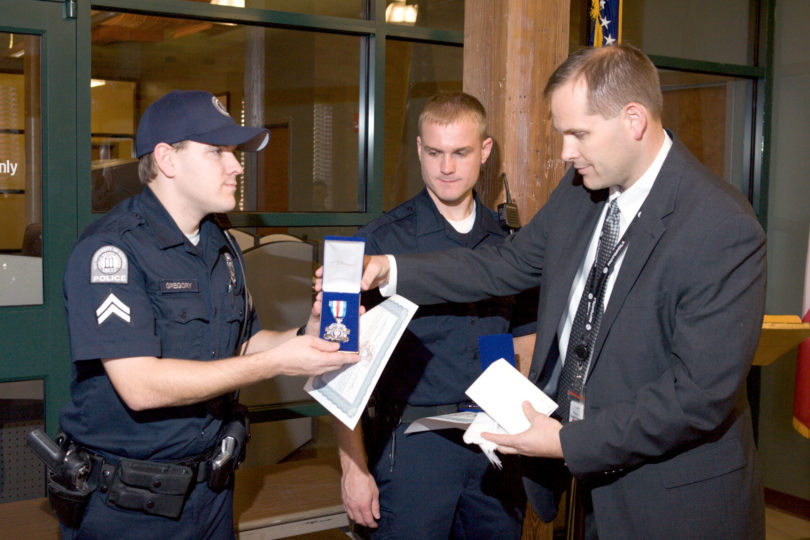 UGA police department honors its own

For UGA police officers, going beyond the call of duty is a tall order. On a daily basis they confront disorderly or violent people who are often a threat to themselves and others.

It’s reasonable then, that reaching beyond everyday bravery is cause for tribute.

One such instance happened during the early morning hours of Dec. 3, when Cpl. Derrick Gregory and Officer James Simons dashed into a burning fraternity house to save its residents.

“You served us on a much higher level that night,” says UGA Police Chief Jimmy Williamson, who handed the officers the rare Medal of Valor award for the actions regarding the incident.

“This is the first time since I’ve been here that we’ve given this award,” he also says.

Simons and Gregory noticed the fire on a routine patrol of campus. Gregory says they dashed toward a gray column rising from the Tau Epsilon Phi house on Baxter Street.

Arriving before Athens-Clarke County responders, the UGA officers went into the house without fire gear to help residents still inside.

“There wasn’t any hesitation. We both saw the situation and responded. We wanted to get everyone out as quickly as possible,” Gregory says.

All 22 people in the house escaped without injury. The incident is still under investigation. The fire caused an estimated $100,000 of damage to the house.