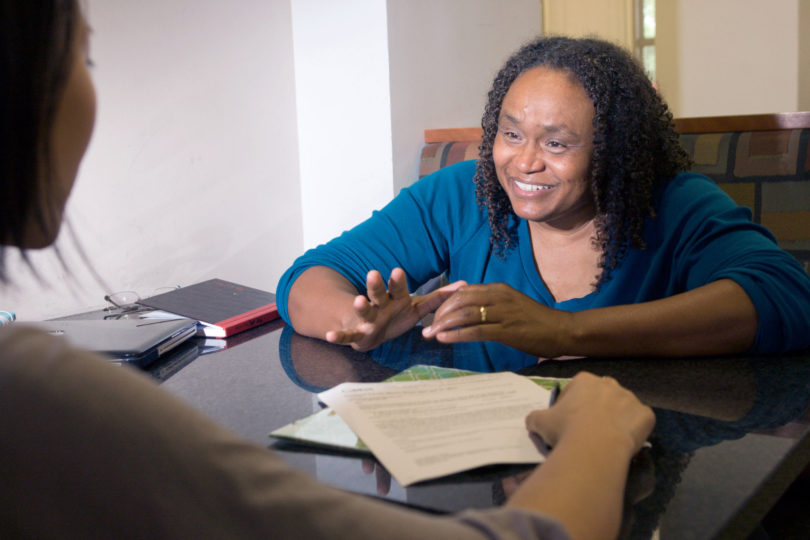 No, the professor of epidemiology and biostatistics isn’t taking on the mysterious question of the afterlife. Instead, she’s looking at the health risks and problems that family members suffer after losing a loved one.

Dubbed the Mortality Project, Miles and other researchers at UGA and beyond are studying how the process of losing a family member-and the legal and financial burdens that follow-negatively affect one’s health. They also are looking for ways to better prepare patients and their families for death.

“Simply put: It’s the effect of mortality on the bystanders,” Miles said.

“Usually in a mortality study, we think of death as an endpoint,” she said. “If you smoke too much, you die; or if you eat fatty food or don’t exercise, you die. So we’re always calculating the risk for dying on individual behavior. This project asks the question: If you experience the loss of someone else, what does that do to your own health?”

Miles suspects that mortality is having negative health consequences on family members and that there is room for improvement in public health policy to address that.

“I’m making the argument that mortality is driving public health,” she said. “That’s how the project came into being.”

The timing is important since the baby boomers are nearing old age­-the oldest have turned 66; the youngest are 45. That age range means that the sizable boomer population is at a higher risk for medical problems­-and, yes, death.

With that, Miles believes more bystanders will be exposed to health risks associated with the loss of a family member.

“We can do something about that risk if we acknowledge that it exists,” she said.

The Mortality Project is Miles’ first big research undertaking since she worked on health care legislation in Washington, D.C., for one year in 2009 as a Fellow on the Senate Finance Committee. After the passage of the Affordable Care Act, she penned the book Health Reform and Disparity, which recounts what she learned during her time in the nation’s capital.

“It’s not perfect,” she said of the health care law, “but it goes a long way toward fixing what ails us.”

After joining the Institute of Gerontology, her work in Washington, D.C., prompted her to consider broader problems needing to be addressed in public health.

“I spent the year thinking about what an institute of gerontology does in our current environment,” Miles said.

Under the direction of professor emeritus Leonard Poon, the institute previously had completed the celebrated Georgia Centenarian Study, which analyzed the longevity of Georgia’s oldest residents.

Looking for fresh ideas, she decided to steer the institute toward “looking at the older population in a societal or environmental context.”

That means looking at how geriatric patients affect the broader society and, with that, looking at what can be done to improve that aspect of public health.

One of the early undertakings of the Mortality Project focuses on whether pastors can improve their service toward grieving families-rather than expecting hospitals to handle these sensitive matters after the fact.

“We started with them because they are very involved (with dying patients and their loved ones), but they’re not medical,” she said.

Miles is collaborating with UGA’s Obie Clayton Jr., the Donald L. Hollowell Distinguished Professor of Social Justice and Civil Rights Studies in the School of Social Work, on this portion of the project. In November, they received a small grant from the Decatur-based Association for Clinical Pastoral Education to develop training to help pastors better prepare their parishioners to better handle the complexities of dying. The grant came after Clayton and Miles led a survey of Georgia-based ministers to talk to them about their role in guiding parishioners through the process of dying.

“Most of the ministers wished they had more training in the end-of-life care,” Clayton said.

Beyond this initiative, Miles envisions the Mortality Project eventually covering a broad scope of topics surrounding loss, including survivor health, health care fraud, public safety and community stability. Miles hopes that some of her work will encourage other researchers to conduct their own studies on this topic.

“We can do something about that risk,” she said, “if we acknowledge that it exists.”