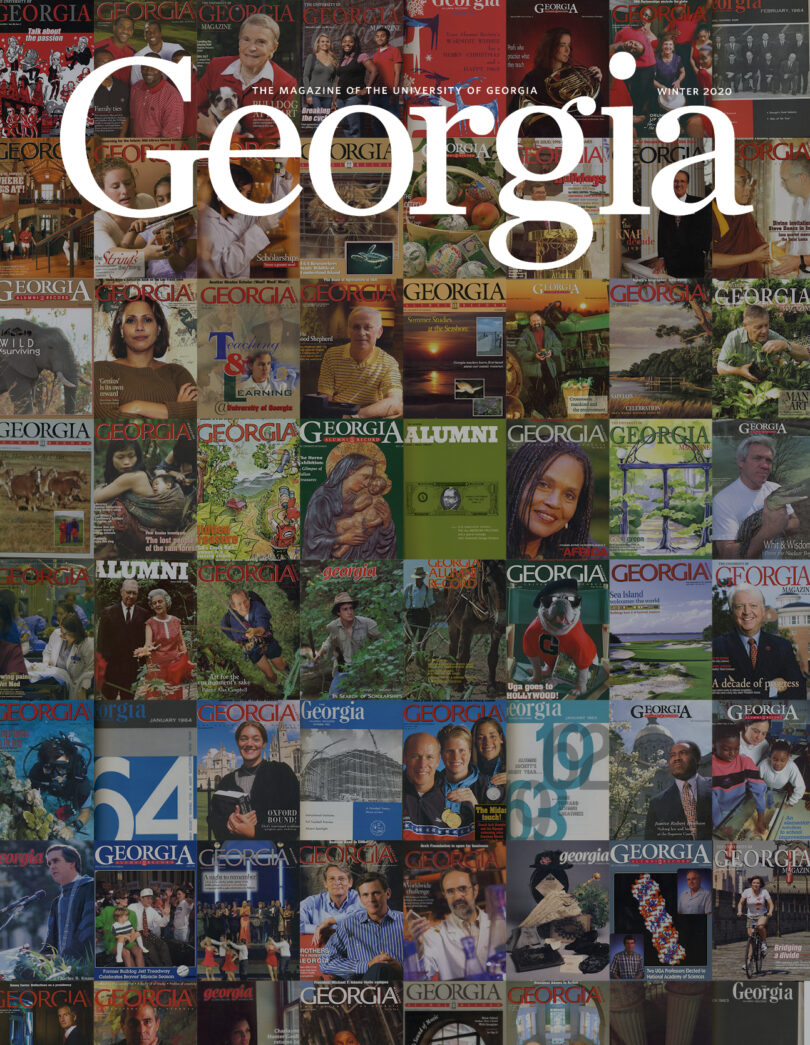 Just a few of the more the 400 covers that have adorned Georgia Magazine since its founding in 1920. (Photo illustration by Jackie Baxter Roberts/UGA)

Happy 100th birthday to us!

On Aug. 15, 1920, 4,000 copies of a new publication were distributed to University of Georgia graduates and other supporters. One hundred years later, that publication—the one you are holding right now if you are looking at a print version—is still covering the Bulldog community. In tracing its 100 years, what stands out is how Georgia Magazine represents the times and culture of the University and society at large through the years. 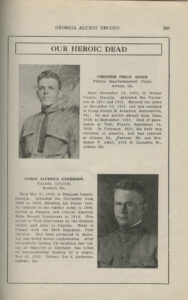 More than 40 UGA alumni died in World War I. They were remembered in the pages of the Georgia Alumni Record.

The Georgia Alumni Record, the forerunner of Georgia Magazine, launched with a very specific purpose: to help the War Memorial Fund raise $1 million in honor of the UGA students and alumni who fought and died in World War I (see right). The fundraising campaign was Georgia’s first, and it exceeded expectations. By the time the campaign closed on Nov. 11, 1921—the third anniversary of the armistice that ended the war—the fund had raised $1.12 million, and part of that money went to build Memorial Hall.

With the money in hand, that could have been the end of the Record, but founding editor Robert P. Brooks AB 1904 (the namesake of Brooks Hall) saw value in continuing the publication. The Record could be an essential tool in keeping UGA’s 7,000 alumni connected to the university—and encourage them to donate to it. It could also promote university priorities and market the institution (even though that term was decades from coming into vogue).

The administration agreed, and the Record not only continued but expanded. An advertising manager and four associate editors were hired—including Nell Upshaw MA 1923, who focused on women students and alumnae; she would eventually join UGA’s faculty. Subscriptions for the 12 monthly issues were $1.50 a year.

The stories were a grab bag, and some had a distinct activist bent. Faculty members wrote detailed essays asking for new facilities or additional program funding. Campus speeches were reproduced verbatim, and in 1928 a story announced a stadium was proposed for Athens. That would not be the last we’d hear of that project.

Now that the campaign is behind us, however, and Alumni Record has become the regular organ of the Alumni Society, the editor feels that it should be made more truly representative of the University than it has hitherto been.” — Robert P. Brooks, founding editor and business manager of the Georgia Alumni Record 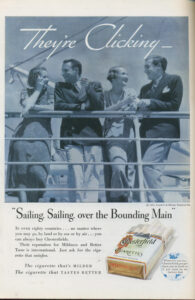 The magazine began accepting advertising in the 1930s. The products that appeared have changed through the years.

The Great Depression hit the magazine just as hard as it did the rest of the country. The Record suspended production for much of 1933, and when it came back, it was shorter and combined issues weren’t uncommon. Its focus turned to themed issues that promoted university strengths like agriculture, journalism, and the sciences.

Editor Thomas Gray worked without a salary for a time since there was no money to pay him. On the production side, color began to make regular appearances on the cover, and the first color ad appeared in 1932—for Chesterfield cigarettes (left). It was a different time.

Beginning in February 1941, the Record listed alumni serving in the military, including their rank, branch of service, and domestic station. After the United States entered World War II, the long lists went away and were replaced with news briefs on the accomplishments of individual alumni fighting overseas.

Alumni killed in action would often receive a small profile along with a photo. That continued until the numbers grew so much that a war obituaries section was added to the Class Notes. The practice would continue into the late 1940s as alumni who had been missing in action were declared dead. 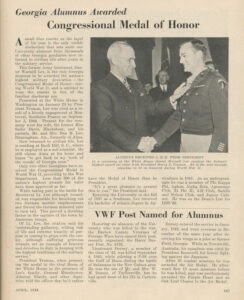 While the Record maintained its focus on the campus and state following World War II, there was significant curiosity about the wider world. Each year brought features and photos about exchange students studying on campus (mainly in agriculture).

The magazine underwent a major redesign in October 1956. The covers became flashier, and there was a new focus on off-campus features. While alumni obituaries remained in the magazine, the Class Notes section, which previously took up half the publication, went away. Readers didn’t appreciate the change. In November, one letter writer asked, “What happens to classmates short of death?” Class Notes returned in December.

In 1961, Charlayne Hunter-Gault ABJ ’63 and Hamilton Holmes BS ’63 enrolled as UGA’s first African American students, forever changing the university. The Record did not cover their admission directly. But in January 1962, a story about a meeting of the Southern Regional Educational Board—a group working to improve college education in the Southeast—included this phrase: “Everyone who can profit from a college education should have a chance to get that education.”

That was far from a declarative statement promoting inclusion as we know it today, but rather a quiet call to open higher education’s doors to all.

The Record may not have taken a direct stand on race relations in the 1960s, but it dove deep into other subjects that remain relevant today. Its highly detailed articles could just as easily have been written last week, with stories like “The Plight of the Humanities”; “To Keep Pace with America,” which detailed how colleges were adapting to modern society; and “Life with Uncle [Sam],” which explored federal influence in education. 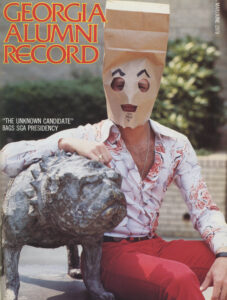 In the 1970s, the magazine shifted from big thematic pieces and got more personal. Faculty profiles and student profiles became regular elements of the publication. Alumni stories were not just about the featured but about what they were doing to change the world.

The Record didn’t shy away from showing a sense of humor, either. The May-June 1978 issue featured “The Unknown Candidate” on the cover, complete with a paper bag over his head, similar to The Unknown Comic, a popular comedian of the day. He ran a joke campaign for SGA president and actually won. 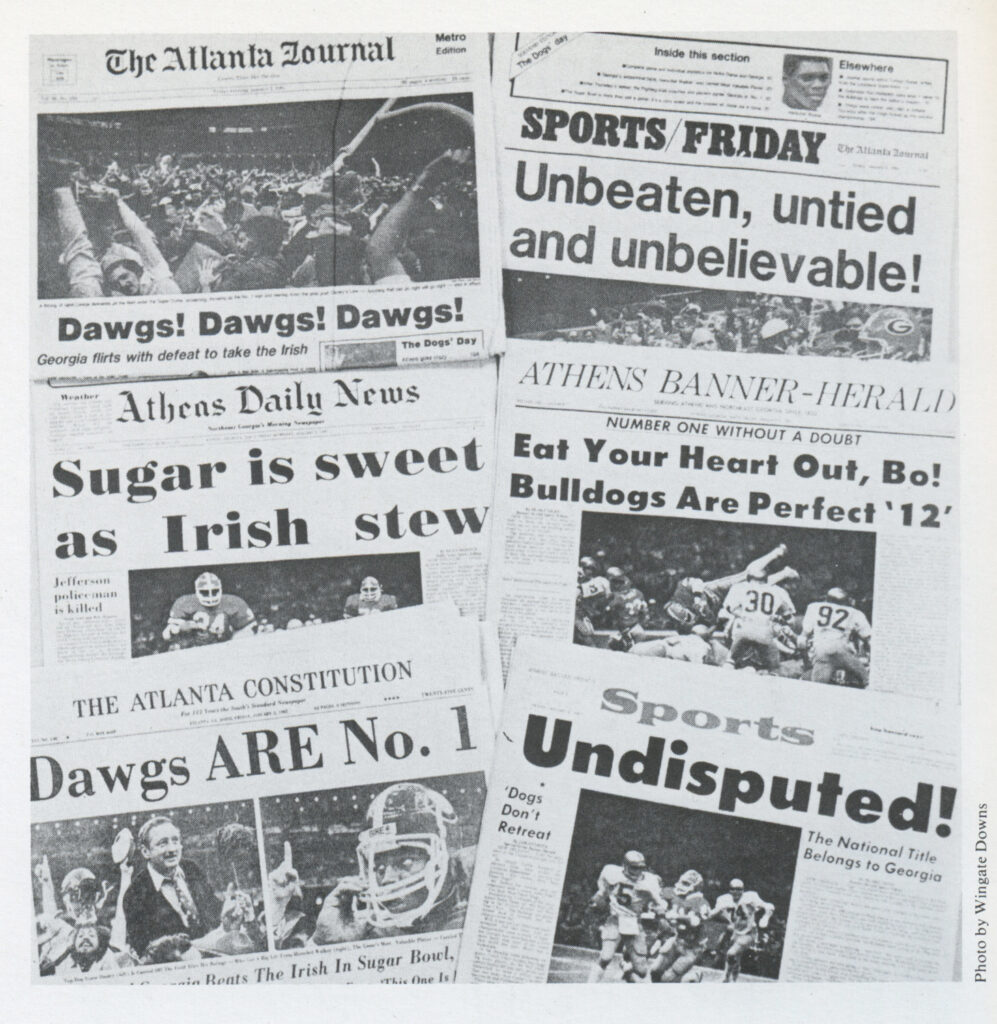 Since the 1920s, Georgia Bulldog football has been a staple of the Record. Most every year, the football team appeared on at least one cover. But when the Bulldogs finally won their first undefeated national title following the 1980 season, the cover of the Alumni Record went in in a different direction.

Instead, the January-February 1981 Alumni Record cover featured a Bulldog legend from a different time: Fran Tarkenton BBA ’61, pictured with then-President Fred Davison in front of the Coliseum. The issue kicked off the university’s upcoming $40 million campaign. Tarkenton would be inducted into the Pro Football Hall of Fame in 1986 and the College Football Hall of Fame in 1987, and he remains a much-beloved and dedicated supporter of the university, especially the Terry College of Business. 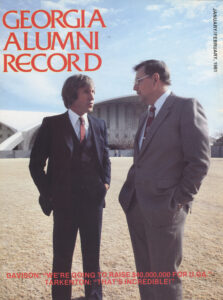 Inside, the Record detailed Georgia’s Sugar Bowl win with reprints from The Atlanta Journal or The Atlanta Constitution. (They were separate newspapers at the time.) One of the pieces was written by the legendary Lewis Grizzard M ’84.

For the rest of the decade, the magazine continued the 1970s editorial mix of general university stories and alumni profiles. The publication’s biggest changes were yet to come.

The 1981-82 academic year is when the Record moved to the quarterly publication schedule Georgia Magazine uses today.

In September 1995, the Georgia Alumni Record became Georgia Magazine. For years, the publication reached beyond the alumni audience; renaming the publication finally acknowledged that fact.

The 1990s also saw a rise in ambitious storytelling. Case in point, the March 1995 cover story “UGA & That Psychedelic Year: 1970” explored one of the most turbulent times in our nation’s history. Eight authors contributed to the 15-page spread, one of the largest in the publication’s history. 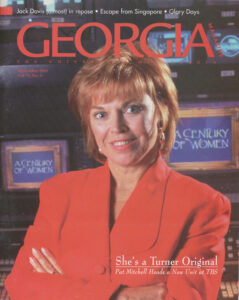 On a more positive note, the Summer 1996 issue was dedicated to the 1996 Summer Olympics in Atlanta (and Athens, which hosted volleyball, rhythmic gymnastics, and soccer). The issue was notable not only for its content but also because it was the first to feature color photos exclusively. While color photos were part of the magazine since the 1960s, for cost reasons, the majority of pictures continued to run in black and white. After 1996, though, color was the way to go.

All of the varied influences and priorities of Georgia Magazine’s previous 80 years seemed to come together at the beginning of the 21st century. Faculty research, alumni accomplishments, the importance of a college education, the student experience on campus, and the University of Georgia’s influence on the world all blended to create a thoroughly modern publication for an increasingly media-savvy audience.

UGA faculty went to the Amazon, Antarctica, and the bottom of the sea, and Georgia Magazine went with them.

Bold cover imagery, which began in the 1990s, really hits its stride in the 2000s as many of that decade’s images remain exciting today.

It eventually had to happen. In the 2010s, UGA’s flagship print publication went online in a PDF format. In 2018, the magazine launched the current electronic version that’s hosted at news.uga.edu/georgia-magazine. This digital format complements the print product, which is cherished by generations of UGA alumni, parents, faculty, friends, and other supporters. Those 4,000 readers from 1920 have grown to 150,000 in 2020.

Georgia Magazine was last redesigned in 2017. The change coincided with the kickoff of the public phase of the Commit to Georgia Campaign, and it helped carry forth a new university visual identity. Whether this new design lasts for the next 100 years remains to be seen. Change does happen. 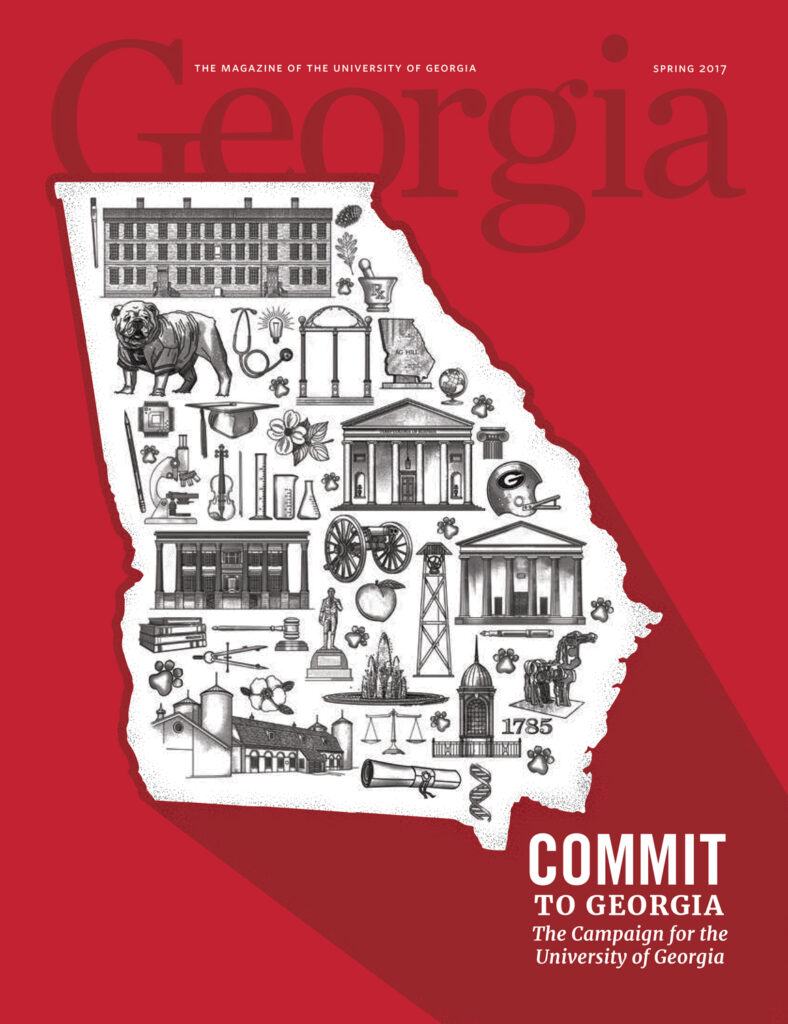