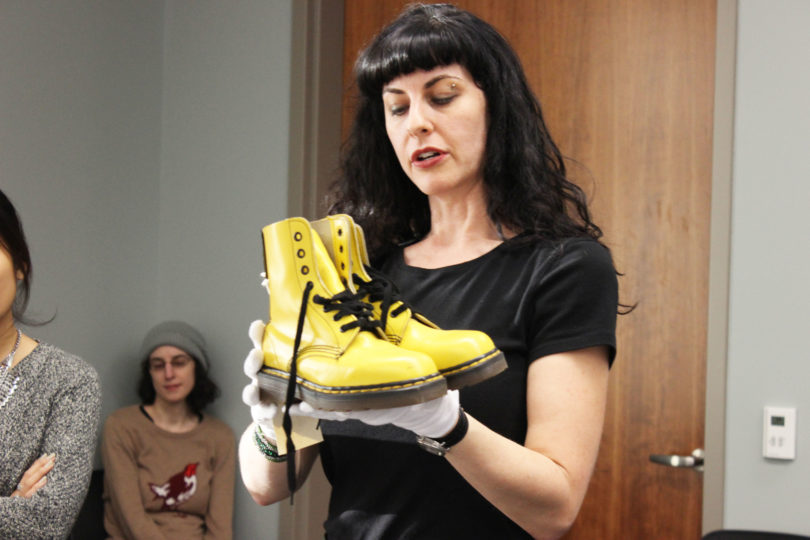 Sklar shows her class a pair of Dr. Martens from the 1990s.

Monica Sklar teaches and writes about punk style, the history of fashion and more.

Fashion has more of an influence on your daily life than you might realize. Just ask Monica Sklar, who is dedicated to studying the many ways fashion, history and culture intersect.

Sklar is an assistant professor at the University of Georgia’s College of Family and Consumer Sciences and teaches courses such as “The History of Dress and Fashion,” “Promotion and Visual Display” and “Pop Culture and Merchandising.” She also is the liaison to UGA’s 3,000-piece Historic Clothing And Textiles Collection. 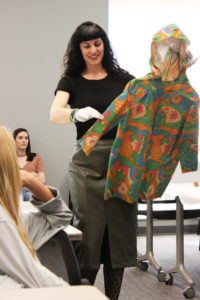 Monica Sklar holds up a multi-colored paper raincoat from the clothing collection while teaching a class.

“You will probably see 1,000 people today and you’ll be communicating with all of them nonverbally. You’ll determine a fact about them based on what they’re wearing. We all talk to a lot more people visually during the day than we do with our voices,” Sklar said.

“Everybody thinks fashion is either removed or highbrow,” Sklar said. “I was at a birthday party this weekend and multiple people told me that if they had known the fashion professor was coming they would’ve dressed differently! There’s this notion of fashion that it’s judgmental and hierarchical. Everybody wears clothes. Everybody does body modifications – be it their hairstyle, accessories, glasses or choice of cosmetics. These things are all communicating nonverbally.”

Sklar specializes in subculture, especially punk fashion. Her first book, “Punk Style,” was published by Bloomsbury Academic in 2013 and she has spoken and published widely.

Growing up in Detroit

Sklar has known she wanted to work in fashion from a very young age. “I was the kid who had a ton of Barbies and made all of their clothes and cut their hair. People used to tell me when I was in elementary school, ‘You’re going to be the editor of Vogue.’” 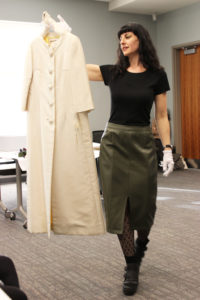 Her love of fashion was cemented on a trip with her family to Michigan’s Mackinac Island at the age of 4 when she found a book of Erte paper dolls. Erte was a Russian-born French artist and designer who is often called the father of art deco. “I was pretty much hooked from there on out,” said Sklar, “in terms of what fashion could be.”

“In metro Detroit you get a flavor for everything,” said Sklar, whose tastes are eclectic. “I like everything from basement shows with anarchists to going to the ballet. I’ve always been an arts and culture person.”

Between her master’s and her Ph.D., she worked in a wide variety of positions: wardrobe styling for video shoots and rock bands, ad agency campaigns for automobiles, editorial for newspapers, a small film, and window displays. She also wrote about fashion for regional newspapers and magazines, curated a large show in Detroit, then managed a gallery with a $200,000 budget before deciding to earn her Ph.D with a design-history and culture emphasis from the University of Minnesota in 2010.

This year marks the 100-year anniversary of the College of Family and Consumer Sciences, and Sklar said the fashion program has been around in some capacity since the college’s founding as the division of home economics in 1918.

UGA’s program covers textiles, merchandising and interiors, a broad scope of study for a fashion program. “Here, you can get a well-rounded education or you can focus in on the thing that suits you, and that’s not true everywhere,” Sklar said.

The program has seen a lot of growth and transition in the last few years, with the addition of several new faculty, including Sklar, who was hired three years ago as a tenure track research professor and to curate the clothing collection, which has pieces that date back to the 1800s. 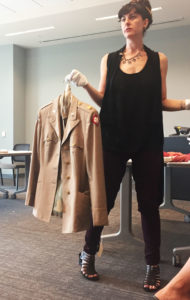 Sklar is working on a large-scale research project that is resulting in multiple journal and book chapter manuscripts and oral presentations. It will be pulled together as her second book and covers the history of punk retail and merchandising and its impact in the U.S.

“It’s a discussion of the production and consumption of apparel styles in punk, how that is tied to the development and maintaining the lifestyle and its ethos, and a chronicle of some of the key stores, brands, designers and style leaders in the movement. It’s been well-documented in the U.K., but not here,” Sklar said. “I realized while writing my first book that merchandising could be an entire book. We can chronicle a band over and over along with their impact, and yet the boutique or space where everyone hung out or the method used to develop a style related to the lives gets forgotten to history.”