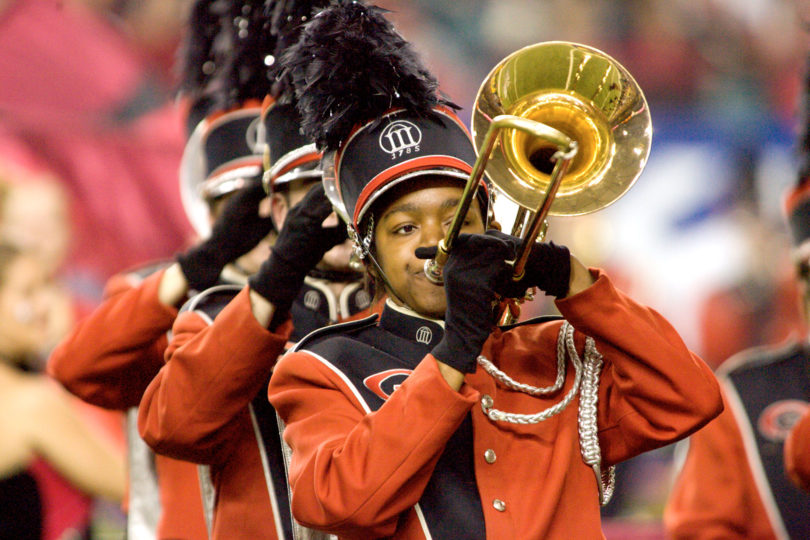 The UGA Redcoat Band, recognized recently with the Sudler Trophy as one of America’s top collegiate marching bands, will make a two-week concert tour of China this spring. A 250-member ensemble will travel to five Chinese cities May 15-27 at the invitation of the U.S.-China Cultural and Educational Foundation.

The tour includes concerts in Beijing, Chengdu, Shanghai, -Suzhou and Nanjing. The Redcoats and their directors will have opportunities to interact with their musical counterparts at Sichuan University and Nanjing University and will give marching performances in several stadia.

“This is an extraordinary -opportunity for our students to participate in what may be UGA’s most unique study-abroad experience,” says David Romines, director of the Redcoat Band. It was through Romines’s professional association with Song Yang of the U.S.-China Cultural and Educational Foundation that the invitation came to pass.

“The foundation in recent years has invited smaller groups, such as a wind ensemble from the University of Kansas, but this will be the first time a full American collegiate marching band has made a tour of China,” Romines says.

While some of the costs are being underwritten by the foundation and private sponsors in China and the U.S., each Redcoat also will pay $1,600 in airfare.

“Our expenses once on the ground in China are covered by our hosts,” Romines says, “but it is our responsibility to cover travel costs over and back.”

The trip for the Redcoat Band, a component of the Hugh Hodgson School of Music, has been approved by UGA’s Office of International Education as a “non-traditional” study-abroad program, bringing the trip under UGA study-abroad guidelines. The university already ranks eighth among American universities in the number of students who study abroad annually. The Redcoats are drawn from across the university representing a cross-section of UGA academic disciplines.

“This is unique in my experience,” says Judith Shaw, associate vice president for international education and director of UGA’s study-abroad program. “I don’t know of another university that has sent this large a group of students on a two-week trip to China, much less a full-blown marching band with all its equipment and uniforms. One of the institution’s signature organizations will be traveling as a wonderful ambassador of the university.”

Romines and the Redcoat staff are accustomed to the logistics and materials-handling that surrounds movement of the band from city-to-city across the Southeastern conference.

“It’s nine buses, 150+ hotel rooms, 400+ meals several times over the course of an overnight trip—and now we’re going to do that for two weeks on the other side of the world,” Romines says.

Once in China, the band will travel by plane, bus and even an overnight train trip across the country. The performance venues range over an 1,800-mile distance from Beijing. There are other daunting details to be ironed out—such as how to line the Chinese stadia with the yard-lines grid of an American football field.

“We’re going to send them a diagram converted into the metric system, and they assure us they can get it done,” Romines says.

The concept of an American marching band performance should translate well to the Chinese culture, he also says. “The Chinese enjoy mass performances of intricate dance with costumes and props—so our half-time show will be similar, with the addition of individual musical instruments for each performer.”

The group will travel with its own physician and interpreter and plans to keep a structured schedule throughout the tour.

“There will be plenty of opportunities for the Redcoats to sightsee in the cities we visit,” Romines says, “but we’ll be doing it as a group. China is not as easy to navigate alone for English-speakers as, say, Italy or France.”

In preparation for the trip, each Redcoat already has applied for a passport. Those will be sent as a group to the Chinese embassy for issuance of travel visas.

Contributions are being sought to help further defray the cost of the trip for individual Redcoat members. Contributions may be made to the Arch Foundation, designated for the Redcoat China Tour, in care of Jeffrey Delk, Hodgson School of Music, Campus Mail 7287.