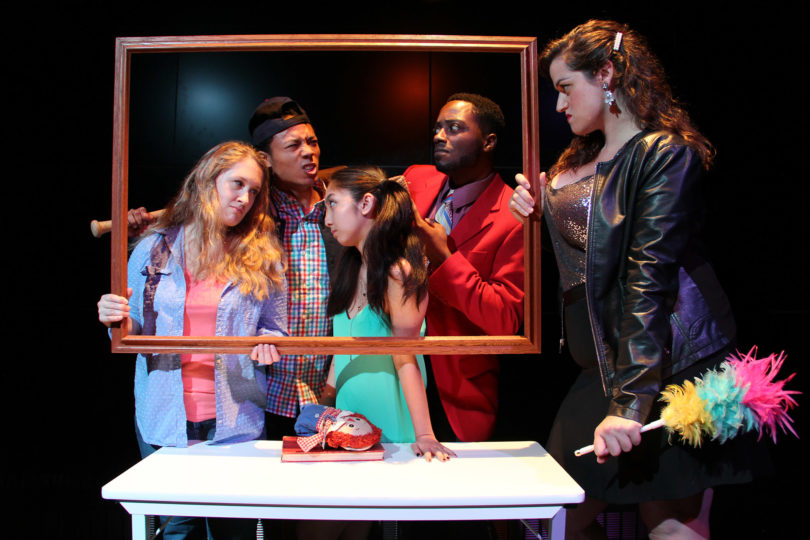 University Theatre's production of The Skin of Our Teeth runs from Oct. 7 through Oct. 16.

University Theatre is presenting The Skin of Our Teeth by Thornton Wilder, a studio series production directed by George Contini, professor of acting in Franklin College’s theatre and film studies department.

An unconventional comedy about the end of the world and the Antrobus family, who live only to end it all over again, The Skin of Our Teeth is a play encompassing all eras and ages. Since the dawn of mankind, the Antrobuses have been a typical, Homo sapien, nuclear family.

George Antrobus, played by second-year MFA acting student Marlon Burnley, provides for his family by inventing the alphabet and the wheel, and despite the occasional affair and feral rage, he cares for his wife, children (Russell Scott, senior risk management and insurance major, as Henry Antrobus and Crystal Le, senior theatre and advertising major, as Gladys Antrobus) and species with staunch dedication.

Maggie Antrobus, played by second-year MFA acting student Taylor Wood, holds the family, the house and the world together. The housemaid Sabina, played by second-year MFA acting student Anna Pieri, works for her living, aspires to greater things and constantly breaks character to comment on the absurdity of the play in which she lives. Through natural disasters, climate changes, extinctions and wars, the Antrobuses persevere and rebuild.

“I love the absurdity, the wackiness and the theatricality of the play,” said Contini. “This play was written so that audiences living in any time period could still relate to it.”

The Skin of Our Teeth was written in response to World War II, but it addresses human crisis as an ongoing epidemic, a repeating cycle faced by every generation, Contini said.

“The Skin of Our Teeth was a play ahead its time,” he said. “This show laid the groundwork for the archetypes that we’ve come to love in shows like The Simpsons and Modern Family. No one had ever done that before.”

“This is a play that allows us to embrace our anxieties and still laugh at them,” he said.

According to David Saltz, head of the theatre and film studies department, “the stripped-down spirit of the studio series is ideal for this play,” allowing for a flexibility with both the material and the conventions of theater.

“George Contini, who is one of the most inventive directors I’ve ever seen, is the ideal director for this wildly radical play,” Saltz said. “He explores ways of dissolving the fourth wall, experiments with breaking out of the theater space and resists the urge to get stuck in specific roles as he creates an immersive experience where there is—literally and figuratively—no wall between the audience and the actors.”

“Like the actual experience of crisis, the show becomes about human connection—we’re all in this together,” Contini said.