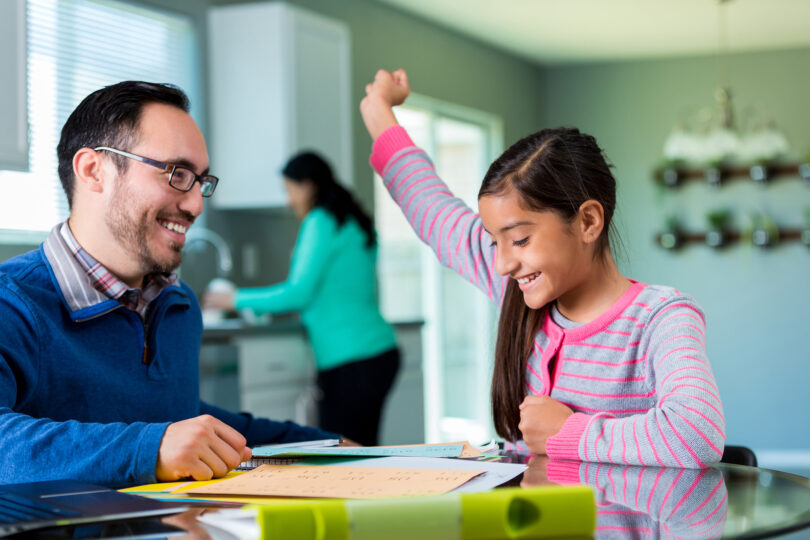 This encouraging response may actually do more harm than good to children’s math performance, according to a new study by the University of Georgia.

Co-conducted by Michael Barger, an assistant professor in the Mary Frances Early College of Education’s Department of Educational Psychology, the study found that encouraging children with responses related to their personal traits or innate abilities may dampen their math motivation and achievement over time.

Parents who make comments linking their children’s performance to personal attributes like intelligence (e.g., “You’re so smart” or “Math just isn’t your thing”) are using what’s referred to as person responses. In contrast, parents who link their children’s actions, such as effort or strategy use, to their performance (e.g., “You worked hard” or “What might be useful next time you have a math test?”) are using process responses.

“Person-focused praise sounds good on its face, but ultimately, it might undermine students’ motivation if they run into challenges,” said Barger. “Because if you run into challenges after being told you’re so smart, you might think, ‘Maybe they were wrong.’ We also know that people tend to think about math as something that some people can do and others can’t, and that language is pretty common, whether it’s among parents or teachers, even with young kids.”

For the study, researchers asked more than 500 parents to report on how they respond to their children’s math performance and their math beliefs and goals. Students were assessed in two waves across a year to measure their math motivation and achievement.

The results showed that parents who viewed math ability as changeable were more likely to give process responses focused on their children’s strategy use and efforts rather than their intelligence or other personal attributes.

In contrast, parents who believe math ability is unchangeable and that math failure can’t be constructive gave more person-oriented responses. Parents with high expectations for their children gave a combination of both responses.

While responses highlighting strategy and effort were not related to any achievement outcomes, children who received more responses about their personal traits—in particular, related to failure—were more likely to avoid harder math problems, exhibited higher levels of math anxiety, and scored lower on a math achievement test.

“There are a couple possible reasons process messages aren’t necessarily improving math achievement,” said Barger. “It could be that they’re just so frequent now that they just kind of wash over, and that doesn’t have as much of an impact. And it could also be that some of these messages don’t land correctly if they’re not authentic. However, with person responses, we saw clear links to anxiety and less preference for challenging math problems.”

A boost to math motivation

Because person responses predict poor math adjustment in children over time, researchers recommend limiting this type of response at home and in the classroom.

“There’s not necessarily any benefit to talking about whether people are or are not math people because if you’re a student who starts struggling, you’re going to start thinking that maybe you’re not a math person,” said Barger.

The second recommendation for parents is to think about their own beliefs and goals for their kids and examine how these might lead them to respond in person or process ways. Simply telling parents to refrain from talking about math ability may not be enough.

Instead, convincing parents that math performance can improve could go a long way.

Many parents praise their children’s individual characteristics as a form of encouragement, but focusing less on how students perform and more on their strategy and enjoyment of math might be a more effective way to enhance motivation.

“We should also be asking whether parents believe that math ability can change and if they view failure as an opportunity to learn, as this seems to be related to less person responses,” said Barger. “This is more effective than just giving a checklist of things to say.”