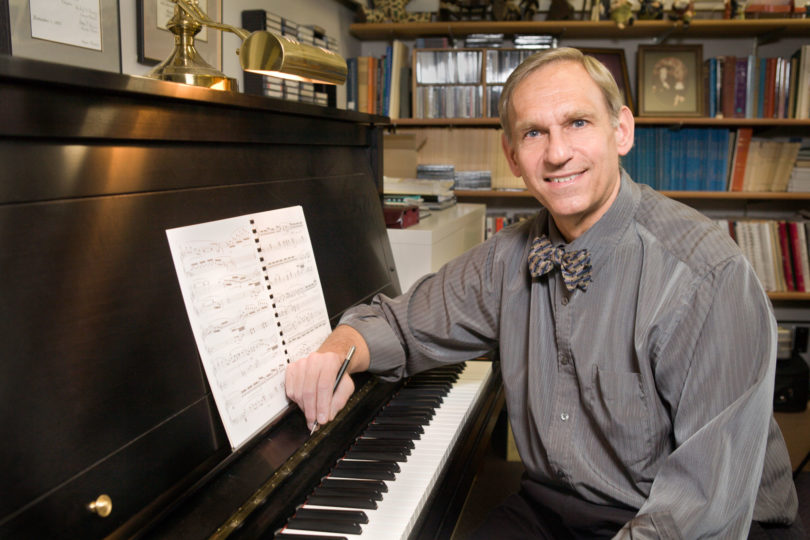 Athens, Ga. – “Things Fall Apart,” a song cycle by University of Georgia’s Roger C. Vogel based on excerpts from Chinua Achebe’s novel of the same name, will premiere Sept. 6 at 8 p.m. in the Ramsey Concert Hall of the UGA Performing Arts Center. The concert is free and open to the public.

The English-language novel “Things Fall Apart” was written by Achebe, a Nigerian author. Originally published in 1958, the narrative tells the story of Okonkwo, a leader and wrestling champion from his village. The plot follows a series of unfortunate events, including the coming of European government and religion, which end tragically with Okonkwo’s self-inflicted death.

Vogel’s song cycle “Things Fall Apart” was written in 2011 and commissioned by international bass-baritone soloist Odekhiren Amaize, an associate professor at Zayed University in Abu Dabi, United Arab Emirates. Amaize has served as a Fulbright Senior Scholar at the Moscow State Conservatory and has performed widely throughout the U.S., Europe and Asia. His performance at UGA is supported by a department invited lecturer grant from the Willson Center for the Humanities and Arts.

“It was especially rewarding to work with Odekhiren Amaize in selecting the excerpts to best portray the events, and it was challenging to write music that has some of the exotic character of Nigerian music,” said Vogel, a professor emeritus in the Hugh Hodgson School of Music who joined the UGA faculty in 1976. A native of Cleveland, Ohio, he has written more than 100 original works for a wide variety of performance, publishing and recording projects.

“It will be a thrill to premiere this new work at UGA with Amaize and other colleagues from campus,” he said.

Jones-Reus and Thomas are on the faculty of the UGA school of music. Jones-Reus is recognized for her multi-faceted career as a soloist, chamber artist, orchestral player and teacher. A graduate of the Juilliard School and recipient of a Fulbright-Hayes Scholarship, she has been a professor of flute at UGA since 2000. Thomas has been on the piano faculty since 1986 and maintains an active performance schedule as recitalist, chamber musician and orchestral soloist throughout North America.

Mueller is a faculty member at Gwinnett Georgia College.