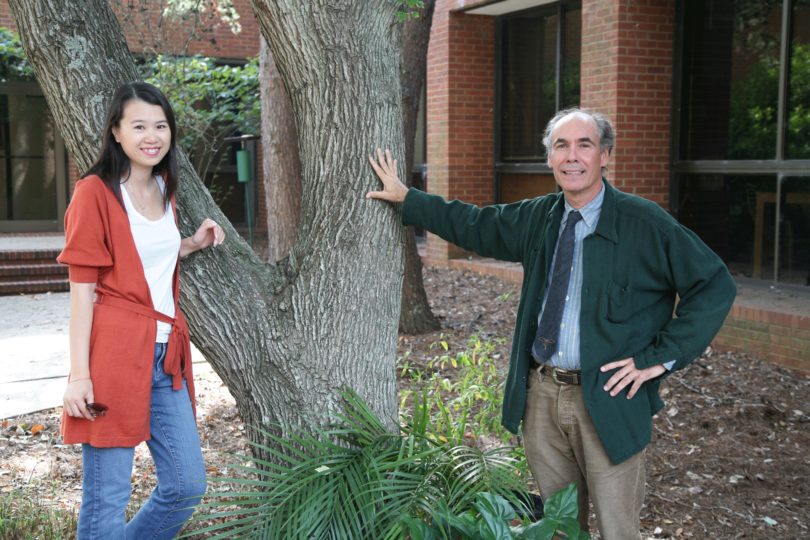 Study finds considerable regional variation in the impacts of extinction on biodiversity.

Athens, Ga. – While a species’ extinction affects global biodiversity, its loss may have even greater impacts at the regional level, according to a new study by University of Georgia researchers. The crucial factor is how closely related the lost species is to others nearby.

The findings, published in the early online edition of the Royal Society journal Biology Letters, could help conservation organizations become more effective in their efforts to preserve biodiversity around the world.

According to Shan Huang, a Ph.D. student at the UGA Odum School of Ecology and lead author of the study, earlier efforts by scientists to predict the effects of extinctions looked at species loss on a global scale. But because both biodiversity and the threats to it vary so much by region, Huang and her colleagues wanted to know what such losses would mean at the regional level.

“We wanted to see if biodiversity-by which we mean not only the number of species but also their genetic and functional diversity-would be affected differently in different places,” she said.

To find out, the researchers combined three massive databases of information about the world’s mammals: the “tree of life” of all known mammals, the International Union for Conservation of Nature’s Red List of Threatened Species and a comprehensive distribution database showing the geographic range of mammals around the world.

Huang explained that “tree of life” is a term used to describe a diagram of evolutionary history. “You can think of each species on the mammal ‘tree of life’ as a leaf at the end of one of the many branches growing from the trunk,” she said. The pattern of branching indicates how species are related to one another and how they change over time in terms of genetics, behavior and interactions with others.

The IUCN Red List is maintained by an international consortium of researchers and classifies species according to their risk of extinction. Thousands of species are listed as threatened, including approximately 25 percent of the world’s known terrestrial mammal species.

The group also used the IUCN’s worldwide mammal range database, which was first developed by John Gittleman, dean of the Odum School of Ecology. Gittleman and his research team, including study coauthor Jonathan Davies of McGill University, spent over six years compiling the database.

“Reducing current rates of biodiversity loss represents one of the biggest ecological challenges of our time, but scientists have previously been hampered by a lack of appropriate data to address critical questions,” said Davies.

Gittleman agreed, adding “By combining the mammal tree of life with information about species range and threat status, we were able to look at the impact of extinction by specific regions, which no one had done before. It wouldn’t have been possible without these enormous data sets.”

The researchers found the effects of extinction on biodiversity in different parts of the world varied considerably, in large part due to how closely related the lost species were to others in their region.

“The tree of life is not symmetrical; not everything has a close relative. Species at the ends of long branches with few offshoots have few or none, while those at the end of shorter branches with many connections have a lot,” Huang said.

“Even if it’s a small number, when we lose species at the ends of long branches on the tree, we lose a lot of diversity, because there are no other closely related species with similar genetic, ecological or behavioral traits. That is generally the case in the Amazon, for instance.”

A different mechanism is at work in southern Asia, where the team found the greatest loss of biodiversity was likely to occur.

“In southern Asia, there are lots of closely related species that are under threat,” said Huang. “The threats in that region tend to have very similar effects on close relatives. When we lose several closely related species, we may lose everything descended from a common ancestor and therefore the entire ancestral branch, too.

“What’s important is that the impact of extinctions in certain regions might be very different from what you’d expect when you only look at the number of threatened species there.”

The team’s findings highlighted the importance of looking at biodiversity in a spatial context and also suggest more research questions. “We need to look at the effects of extinction on ecosystems,” Gittleman said. “If we think of ecosystems as functional units, what happens in southern Asia or the Amazon as we lose these particular species?”

The results could also help conservation groups in their efforts to protect biodiversity. “This is another piece of information that can be used to help guide decisions and focus attention on certain critical areas and species,” he said.

Funding for the research was provided by the National Science Foundation.