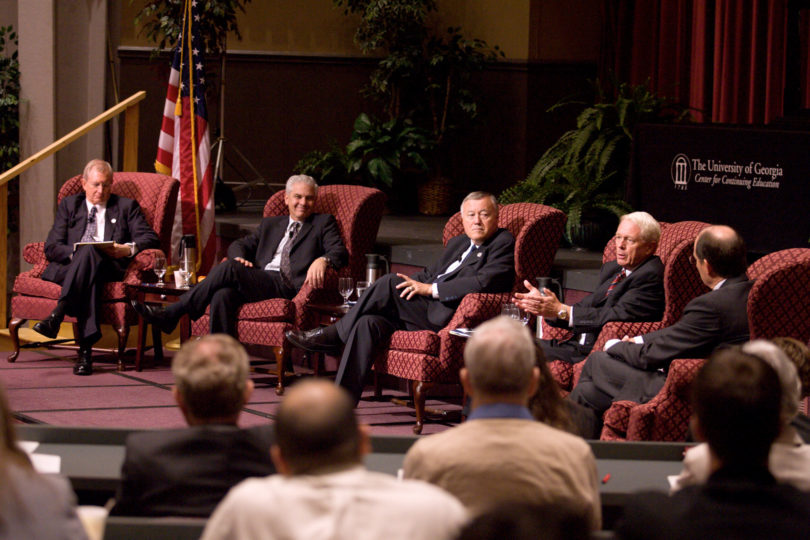 In a talk at the Russell Symposium on the UGA campus, former U.S. Sen. Sam Nunn sent a message to the world: Nuclear power is promising, beneficial and worrisome.

“We’re at the edge of a dangerous new period of nuclear challenges that cannot be met with a Cold War posture or a Cold War nuclear theory. These changes have come in a little more than 15 years and threaten not just the United States and our former adversaries, particularly Russia, but our allies and the world,” he said.

Nunn gave the keynote address ahead of a panel discussion by nuclear experts from public and private institutions.

While the symposium had been in the planning stages for months, its timely topic made it relevant to the minute. A few days before, North Korea tested a nuclear device underground and amid declarations by Iran’s president that his country intends to pursue a nuclear energy program.

The next day, Secretary of State Condoleezza Rice met with national leaders in Tokyo who announced their country has no current intentions of pursuing a nuclear weapons program. Following that, she flew to South Korea and China to discuss proper ­dealings with Pyongyang with Asian governments.

It was a page out of Nunn’s playbook. At the symposium, he urged the U.S. to reiterate its promise to defend Asia from any sort of nuclear strike and begin talks with North Korea to ensure peace.

“History shows that nations rarely give up nuclear weapons without credible assurances of their own security. In the case of North Korea, these assurances must come from several key nations, but must begin with an extensive United States-North Korea dialogue and understanding,” he said.

During the symposium’s panel discussion, praises and doubt about the Bush administration loomed, as did hesitation when it comes to nuclear storage.

In a candid moment, Joseph Cirincione, who works at the Center for American Progress, told the crowd he was “deeply pessimistic” about reasons for storing nuclear waste in ­facilities like Yucca Mountain, Nev.

“I’m very worried when people say ‘We’ll figure it out later’ in regards to nuclear waste. We’ve had nuclear power for 60 years, and we haven’t figured anything out yet. What makes you think in 60 years hence we’ll have a solution?” he asked.

North Korea’s test also raised concerns. Even if its regime doesn’t threaten another nation, its potential to sell information and supplies to terrorists could spark new worries in the ongoing war on terror, panelists said.

“We’re in a race between cooperation and catastrophe and at the moment, the outcome is unclear,” said Nunn at the conclusion of his speech.

The Russell Symposium is a biennial event held in honor of the late U.S. Sen. Richard B. Russell. The next one is scheduled for 2008.