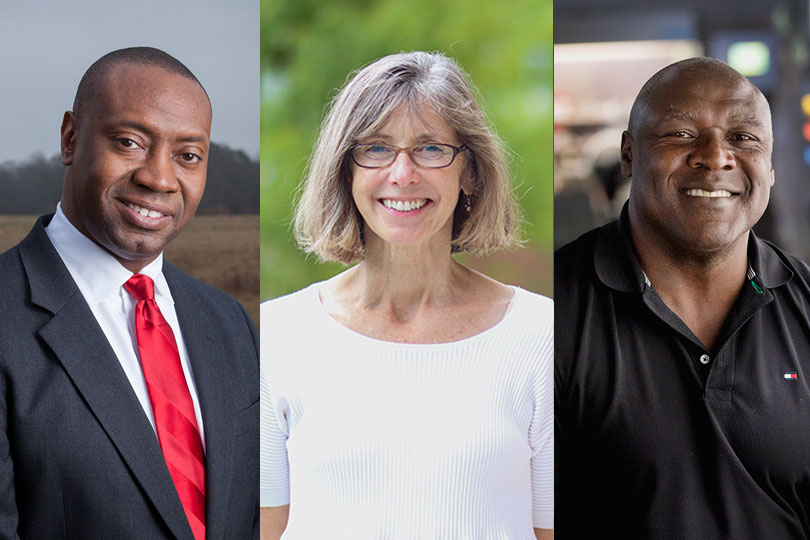 Three distinguished faculty members at the University of Georgia have received one of the highest honors a scientist can earn, election to the National Academy of Sciences.

The University of Georgia’s three newest National Academy of Sciences members are:

“First and foremost, on behalf of the University of Georgia, I want to congratulate Drs. Moran, Robinson and Shepherd on this outstanding achievement,” said President Jere W. Morehead. “This announcement is a clear sign of both their accomplishments as scholars and the growing national reputation of the University of Georgia. To have three faculty members inducted in a single year is truly a proud moment for UGA.”

In total, 14 current or former UGA faculty members have been elected to the National Academy of Sciences.

“The election of Drs. Moran, Robinson and Shepherd to the National Academy of Sciences reflects the far-reaching impact of their work as well as this institution’s commitment to attracting and supporting the nation’s very best scientific talent,” said S. Jack Hu, the university’s senior vice president for academic affairs and provost. “I congratulate all of our honorees and thank them for continuing to bring distinction to the University of Georgia.”

All three of the university’s latest inductees to the National Academy of Sciences are faculty members in the Franklin College of Arts and Sciences.

“Leading scholars who have published ground-breaking research on a critical range of scientific endeavors, Drs. Moran, Robinson and Shepherd also share a passion for teaching that introduces students at all levels into the world of discovery through investigation,” said Alan Dorsey, dean of the Franklin College of Arts and Sciences. “Their innovations promote science and make the complexities of our world easier to understand.”

Moran, who joined the department of marine sciences in 1993, is an internationally recognized leader in marine microbiology and microbial ecology. Her work illuminates the roles that microbes play in mediating globally significant processes associated with the cycling of nutrients such as carbon and sulfur between the ocean and atmosphere.

Moran is the author or co-author of more than 180 peer-reviewed journal articles. Her findings, which have appeared in major journals such as Science, Nature and Proceedings of the National Academy of Sciences, have been cited nearly 22,000 times. Her research has been supported by more than $17 million in funding from federal agencies such as the National Science Foundation as well as private foundations such as the Gordon and Betty Moore Foundation.

Moran’s expertise is widely sought. She serves on the board of governors of the American Academy of Microbiology, has served on the board of reviewing editors for Science and has served in editorial roles for five journals in her field. In addition, she has delivered scores of invited presentations across the United States and internationally.

Her additional honors include being named a Simons Foundation Investigator in Life Sciences, a fellow of the American Association for the Advancement of Science and a fellow of the American Academy of Microbiology. She also has received the EPA Scientific Achievement Award, the SEC Faculty Achievement Award, UGA’s Creative Research Medal and was named Distinguished Research Professor.

Moran teaches several undergraduate and graduate courses at UGA in microbial ecology, marine ecological genomics and marine biology. In addition to mentoring undergraduate and graduate students at UGA, she has invited high school students to work with her in the lab and in the field and has helped high school teachers incorporate marine science into their classrooms.

“I cannot think of a better life’s work than being a scientist, or of better luck than to have done so at UGA,” Moran said. “My students, postdoctoral researchers and faculty colleagues have enriched and inspired my work in countless ways.”

Robinson and his team have advanced humanity’s fundamental understanding of the structure, bonding and reactivity of elements such as aluminum, silicon, phosphorus and sulfur. These elements are abundant on earth, and Robinson’s work has shown that a number of them can perform some of the same commercially important chemical transformations as less abundant and more expensive elements. Robinson, who joined the UGA faculty in 1995, has published his findings in more than 170 peer-reviewed journal articles; six book chapters; a book; and scores of regional, national and international conference presentations.

Robinson is actively shaping the future of his field. He has been a consultant or panelist for the National Science Foundation and the Ford Foundation, sits on the editorial boards of seven chemistry journals and has chaired panels at regional and national meetings of the American Chemical Society.

In 2017, he was named a fellow of the Royal Society of Chemistry, the largest organization in Europe for advancing the chemical sciences. He also has received the Humboldt Research Award, the American Chemical Society’s F. Albert Cotton Award in Synthetic Inorganic Chemistry, the National Science Foundation’s Award for Special Creativity, the Percy L. Julian Award of the National Organization of Black Chemists and Chemical Engineers, the SEC Faculty Achievement Award and UGA’s Lamar Dodd Research Award.

Robinson is also the lead faculty member for coordinating UGA’s participation in the Aspire Alliance IChange Network, an APLU-affiliated network of universities seeking to develop inclusive and diverse STEM faculty across the nation through best practices in hiring, development and retention.

His enthusiasm for his field extends well beyond campus. He often visits elementary schools as well as Jacksonville State University, where he earned his bachelor’s degree before earning his doctorate at the University of Alabama, to talk with students about careers in science.

“I remain humbled by this most prestigious honor,” Robinson said. “Being elected to the National Academy of Sciences brings substantial attention to the importance of fundamental chemistry research. Perhaps more so than any other time in recent memory, science must be valued and supported.

“Regarding my election to the NAS, such accolades are always team efforts, and I have been fortunate to have worked with some exceptional co-workers, most prominently Dr. Yuzhong Wang, senior research scientist, here at UGA. Moreover, my research program has always been greatly supported by  the senior administration of the University of Georgia,” he added.

Shepherd’s election to the National Academy of Sciences comes in the same year that he has received two additional high scientific honors: election to the National Academy of Engineering and to the American Academy of Arts and Sciences. Shepherd, who has been a UGA faculty member since 2006, holds the distinction of being the first faculty member in the institution’s 236-year history to be elected to all three honorary societies.

Shepherd is a leading international expert in weather and climate. He directs the university’s atmospheric sciences program and is a professor in the department of geography. Shepherd has authored more than 90 peer-reviewed scholarly publications, and his research has been supported by agencies such as NASA, the National Science Foundation and the U.S. Department of Energy.

Public engagement has been a key priority for Shepherd, who is frequently sought as an expert on weather, climate and remote sensing. He is the host of The Weather Channel’s award-winning show “Weather Geeks” and is a contributor to Forbes Magazine. He is frequently asked to advise key leaders at NASA, the White House, Congress, the Department of Defense and officials from foreign countries. He briefed the U.S. Senate on climate change and extreme weather in 2013 and testified before the House Science Committee in 2019.

Shepherd’s additional honors include receiving the Mani L. Bhaumik Award for Public Engagement with Science from the American Association for the Advancement of Science, the AGU Climate Communication Prize, and being named a fellow of the American Meteorological Society. Former President George W. Bush honored him in 2004 at the White House with the Presidential Early Career Award. In 2015, he was invited to moderate the White House Champions for Change event.

“As a scientist, this is an apex honor in my career,” Shepherd said. “I am also thrilled to be at an institution that values my approach to scholarship and engagement. And one that attracts talent like the other two UGA colleagues elected.”